She was forced to flee her $23 mansion with Ellen DeGeneres after fire threatened the property on Monday.

And now Portia de Rossi has surveyed the devastation left by raging Californian wildfires, taking to Instagram to share a photo of the damage on Thursday.

The picture shows five firefighters surrounding burnt out vegetation with smoke streaming from a contained portion of the Thomas wildfire in southern California. 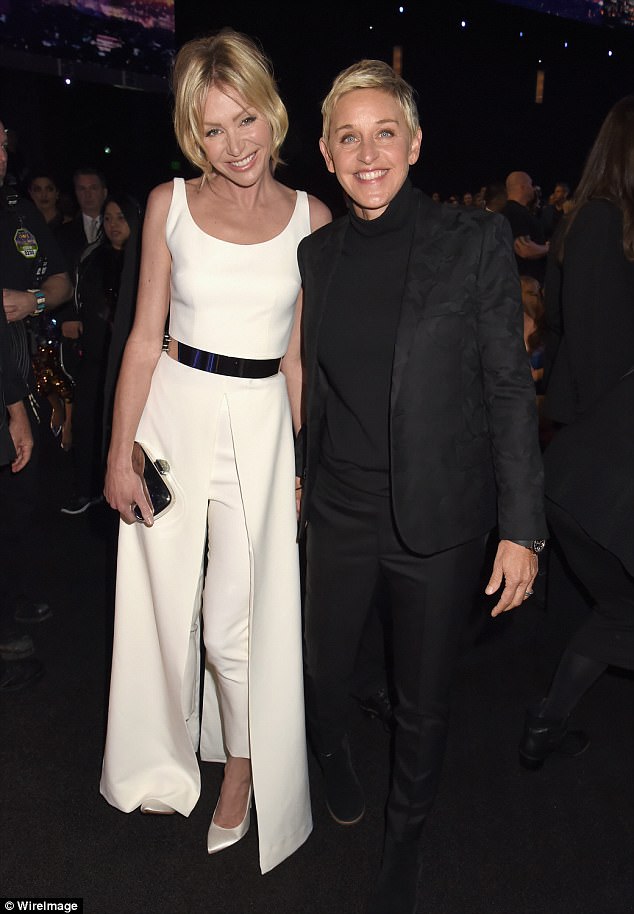 Up in smoke! Portia de Rossi surveys wildfire devastation after she and wife Ellen DeGeneres were forced to flee their $23 million Californian mansion

'When life imitates art,' the 44-year-old posted under the picture, with the hashtag #Thomasfire.

The couple were forced to evacuate their Carpinteria home on Monday with their pets after fire threatened the property.

Portia and Ellen fled their $23 million 4,000 square-metre four bedroom home, which boasts a clay tennis court and plunge pool on its deck. 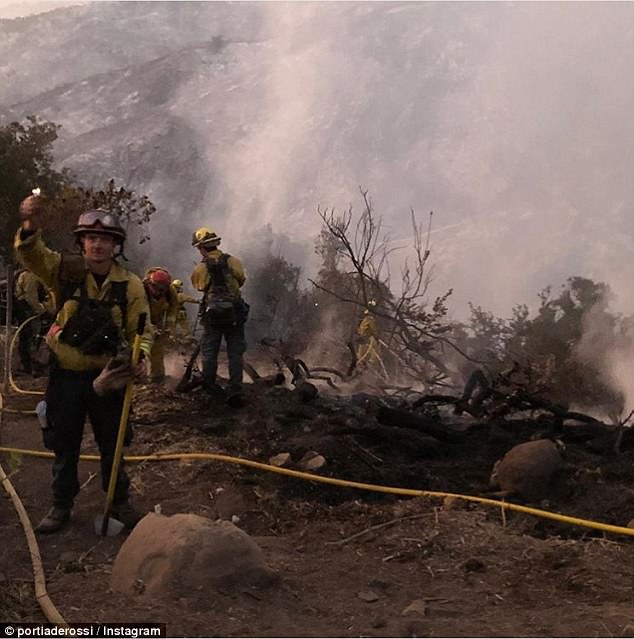 Support: 'When life imitates art,' the 44-year-old posted under the picture, with the hashtag #Thomasfire 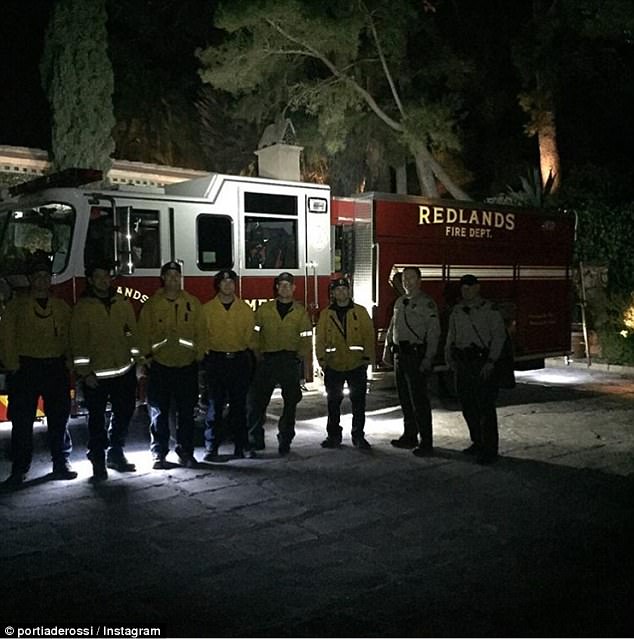 Gratitude: The Arrested Development star's famous wife Ellen also posted a thank you to firefighters battling the blaze on her California property

The image drew immediate reaction from Instagram followers, who were concerned for the high-profile pair.

"Love u guys Xoxoxo," one user wrote, while others added, "hope all your animals are safe," and "Hope all is well! Thanks for sharing!"

Large swathes of California has been in the grip of the out-of-control wildfires since December 4, with the Los Angeles fire department not expecting to contain the blazes until the first week of January next year. 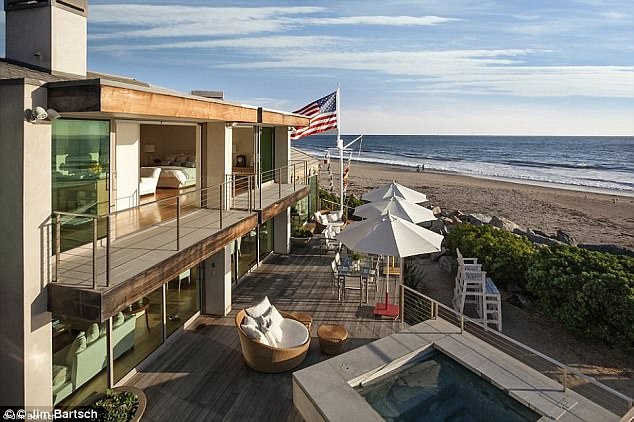 Under threat: The couple only recently purchased the $23 million home, which sits in the path of California's devastating wildfires 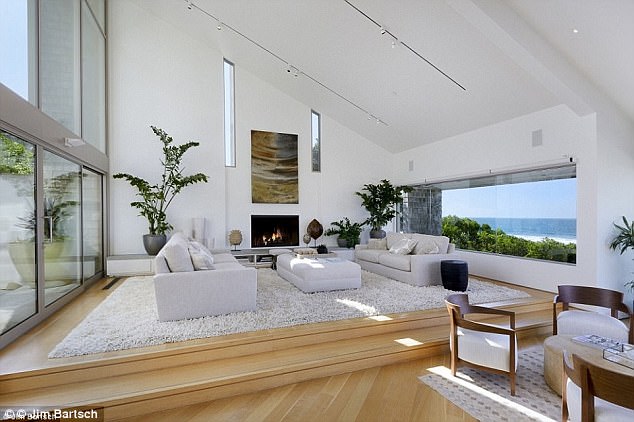 Stunning: The luxury home boasts four bedrooms and a guesthouse along with a tennis court and plunge pool 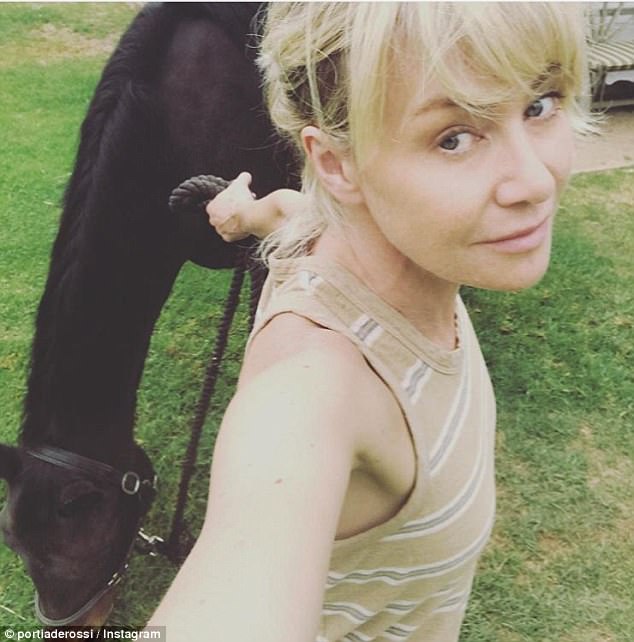 Pets: The famous pair were forced to evacuate their animals as well

The Arrested Development star's wife Ellen has also spoken out about their predicament.

'Our house…it's there right now, but no one can get in to check on it. We basically just had to get out and leave the gates open for the fire trucks and we're right in it…we're right there,' she told Extra on Tuesday.

Ellen added: 'We'll just lay low and just, you know, be grateful for having our pets with us and Portia's horses are evacuated and we're hoping to get them someplace soon and it's, you know, it takes something like this to just remember, you know, just how fragile life is, and how you should never take anything for granted.'

In addition to Ellen and Portia, other big name celebrities have been forced to flee their homes including Paris Hilton, Kylie Jenner, and late night comedian Chelsea Handler. 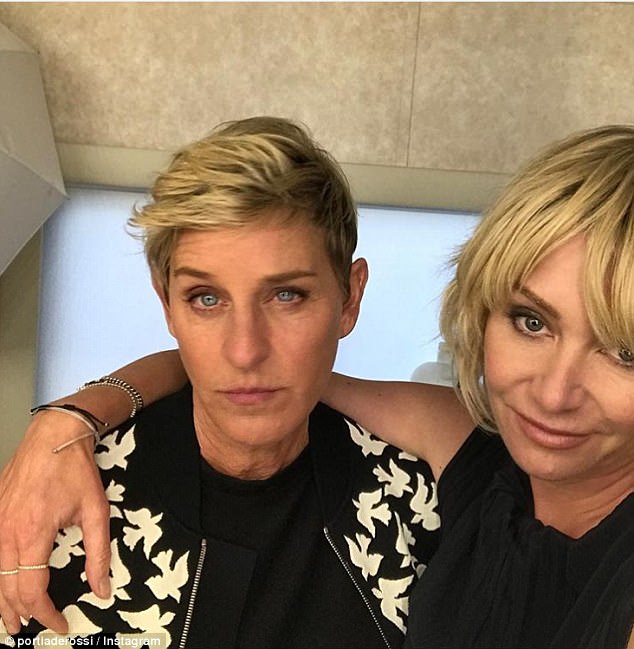 Evacuees: The famous couple only recently bought the $23 million property in California's Carpinteria area, which they were forced to evacuate on Monday