President Trump has removed climate change from his National Security Strategy which is due to be released on Monday, it has been claimed.

The Federalist, which claims to have had access to a draft version of the document, says it will prioritize other threats instead.

Any mention of climate policies is angled not towards global warming but instead is tied to economic growth and energy security.

It is in line with Trump's decision earlier this year to remove the United States from The Paris Agreement and follows his dubious stance on global warming. 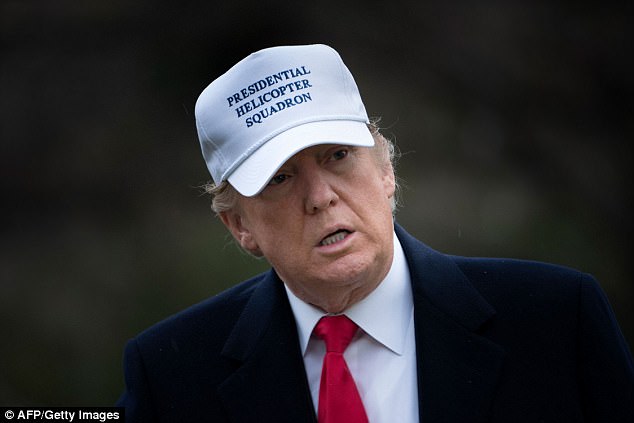 President Trump has removed climate change from a list of national security threats, it has been reported

'U.S. leadership is indispensable to countering an anti-growth, energy agenda that is detrimental to U.S. economic and energy security interests.

'Given future global energy demand, much of the developing world will require fossil fuels, as well as other forms of energy, to power their economies and lift their people out of poverty.'

The Federalist reports that it is given considerably less prominence than in previous versions.

President Obama repeatedly referred to global warming and climate change as one of the most looming threats that the country faces.

Earlier this week, 50 world leaders gathered in Brussels for a climate change summit.

Trump was not among them and was not invited to the event but his name was brought up.

French President Emmanuel Macron described his decision not to participate in the agreement as 'very bad news'.

He was morose as he spoke, telling the gathered audience: 'We’re losing the battle.

'We’re not moving quickly enough. We all need to act.'

On Friday in Chicago, President Barack Obama spoke at a separate summit where he recalled making the climate a priority during his presidency.

'That what that tells us the climate is changing faster than our efforts to address it.

'And that's why I made climate change a priority while I was president,' he said. 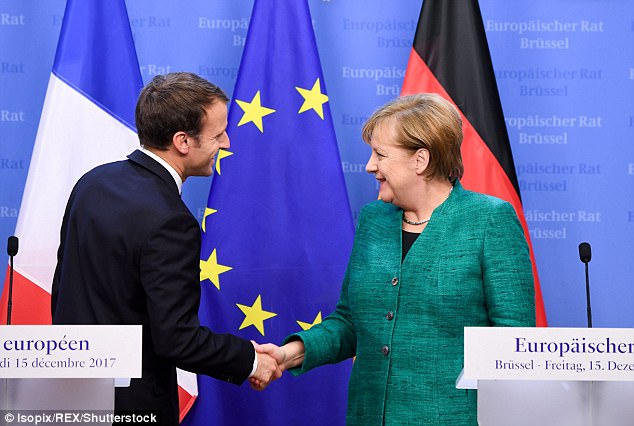 As Trump's team finalized its stance on the issue in the National Security Strategy, other world leaders met in Belgium to discuss it. French President Emmanuel Macron and German Chancellor Angela Merkel are pictured

Trump has long been dubious about his predecessors' commitment to the issue. In this famous and widely mocked 2012 tweet, he suggested global warming was a construct of 'the Chinese'

Trump's anti-climate change action stance was a common thread throughout his campaign. His dubious stance on the issue predates his political career.

In one famous and now widely mocked tweet in 2012, he said global warming was a construct of 'the Chinese'.

In June, he followed through on promises to remove the US from The Paris Agreement, a multi-nation agreement which every country in the world has now signed apart from America.

Trump's reason for backing out was that the agreement was not favorable enough to the US.

He has expressed a willingness to 'renegotiate' and 're-enter' under more pleasing terms when he announced the decision.

'As President, I can put no other consideration before the wellbeing of American citizens.

'The Paris Climate Accord is simply the latest example of Washington entering into an agreement that disadvantages the United States to the exclusive benefit of other countries, leaving American workers — who I love — and taxpayers to absorb the cost in terms of lost jobs, lower wages, shuttered factories, and vastly diminished economic production,' he said.

His biggest concern was the loss of jobs which energy restrictions may impose.

'Compliance with the terms of the Paris Accord and the onerous energy restrictions it has placed on the United States could cost America as much as 2.7 million lost jobs by 2025 according to the National Economic Research Associates.

'They rely for so much, and we would be giving them so little,' he said.

The agreement seeks to prevent global temperatures from rising by 2 degrees Celsius above pre-industrial levels.

The US, Syria and Nicaragua were the only three countries in the world not to have joined it by November. Nicaragua and Syria have since signed.

‘Nothing to fear’ as Austrian far-right enters government