By Tracy You For Mailonline

It's one of the greatest artworks in the world, and now Chinese archaeologists and artists are using 3D printing to make a perfect copy of the Yungang Buddhist Grottoes. 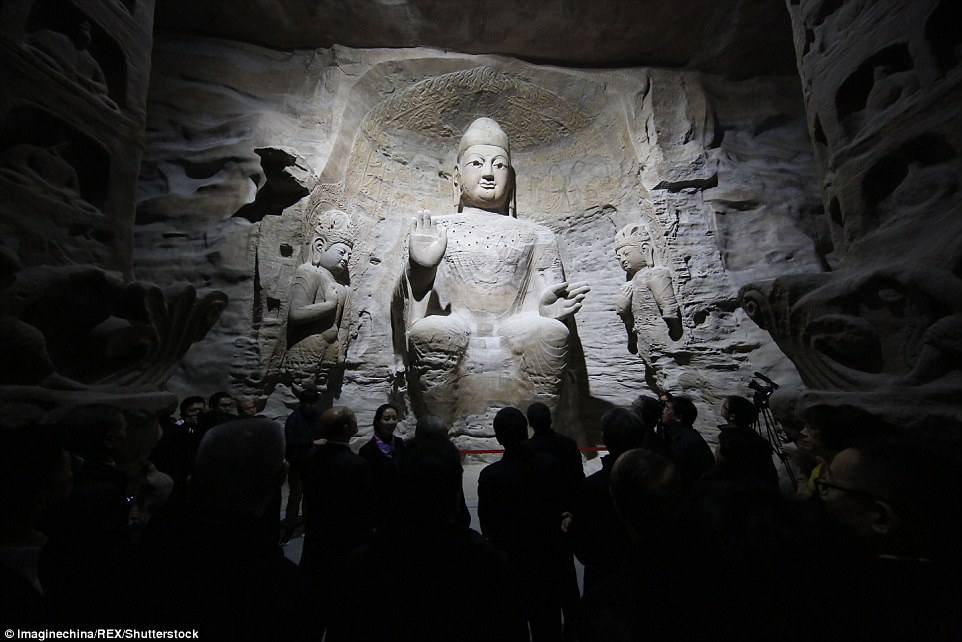 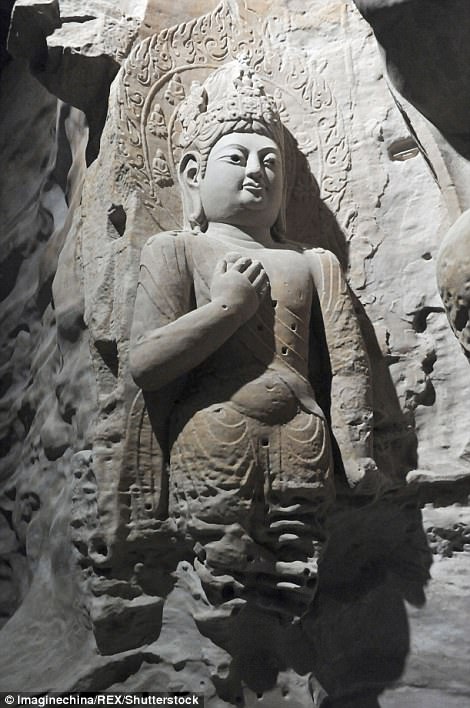 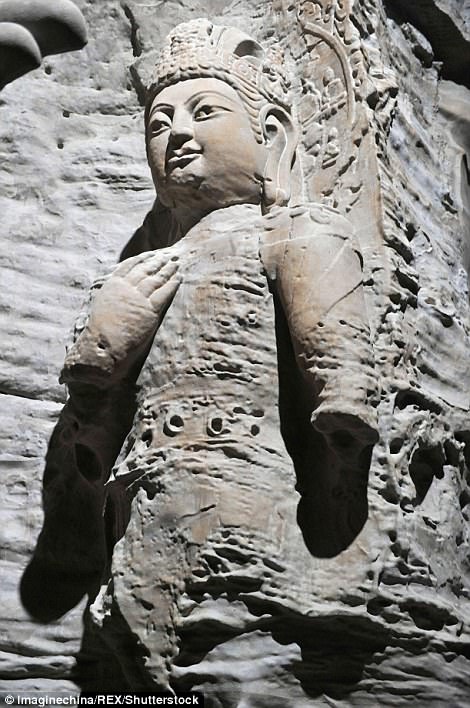 Beautiful and delicate: Archaeologists and artists used 3D printers to produce every minute detail of the 1,500-year-old cave 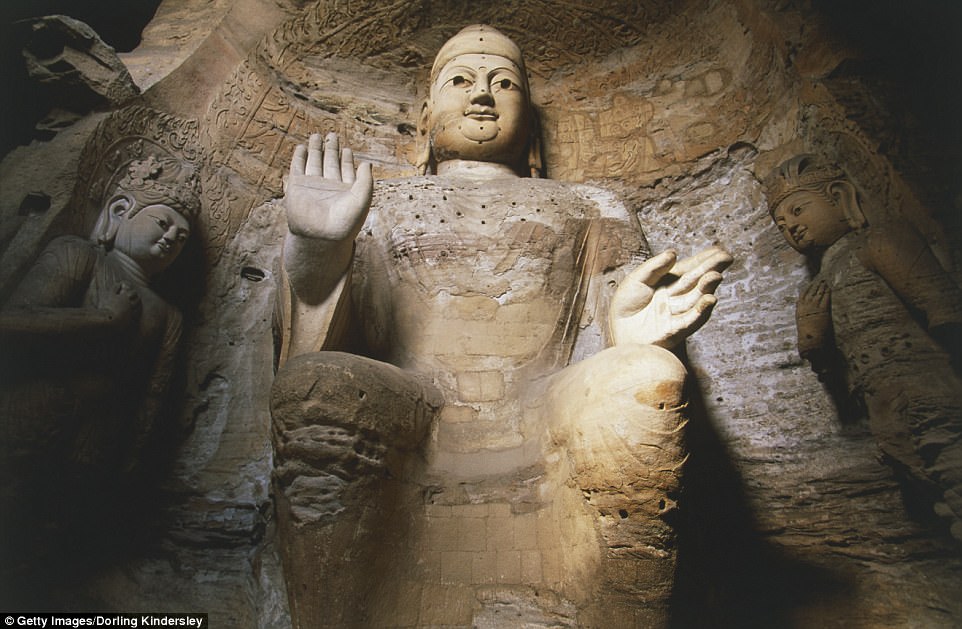 The original: 'West Empress Chamber', the number 3 and the largest cave of Yungang Grottoes (pictured), have been copied 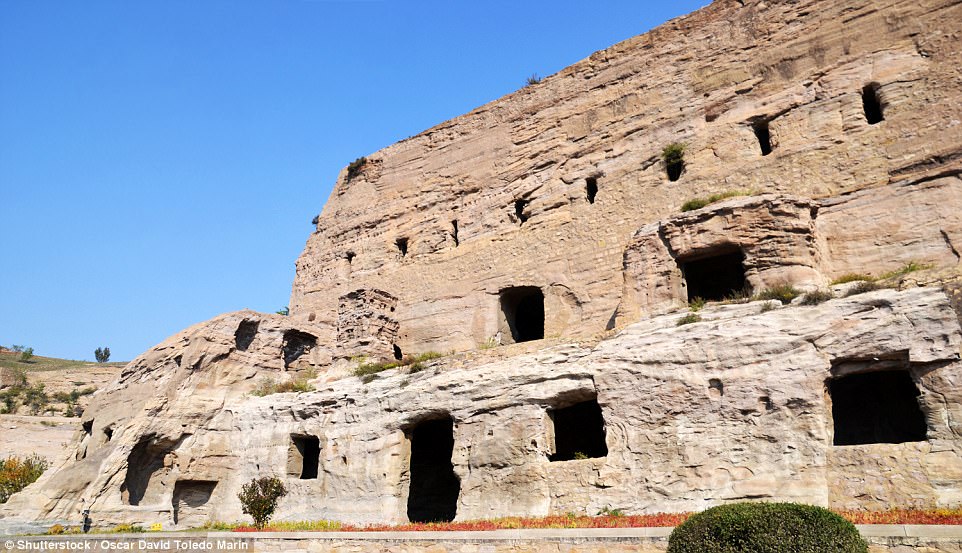 World heritage site: Carved out of a mountain, the 1,500-year-old attraction contains 252 cave temples and 51,000 statues

The original 'West Empress Chamber' was carved between the 5th and 6th century during the Northern Wei Dynasty – when the religion first flourished in China.

The exquisite cave consists of three Buddhist statues. The one in the middle, the largest of the three, is 10 meters tall while the two standing at either side is six meters (20 feet) tall. 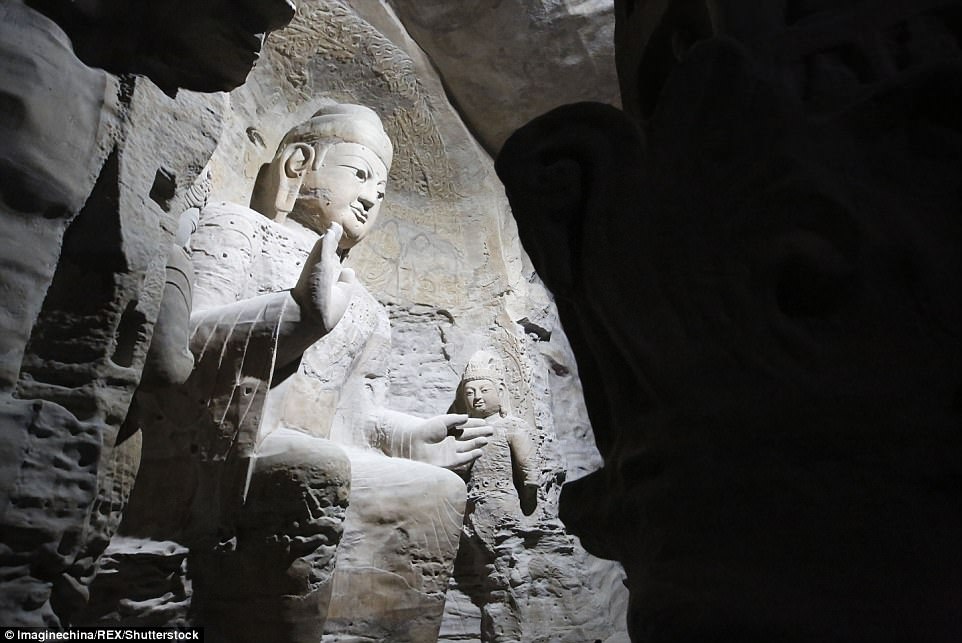 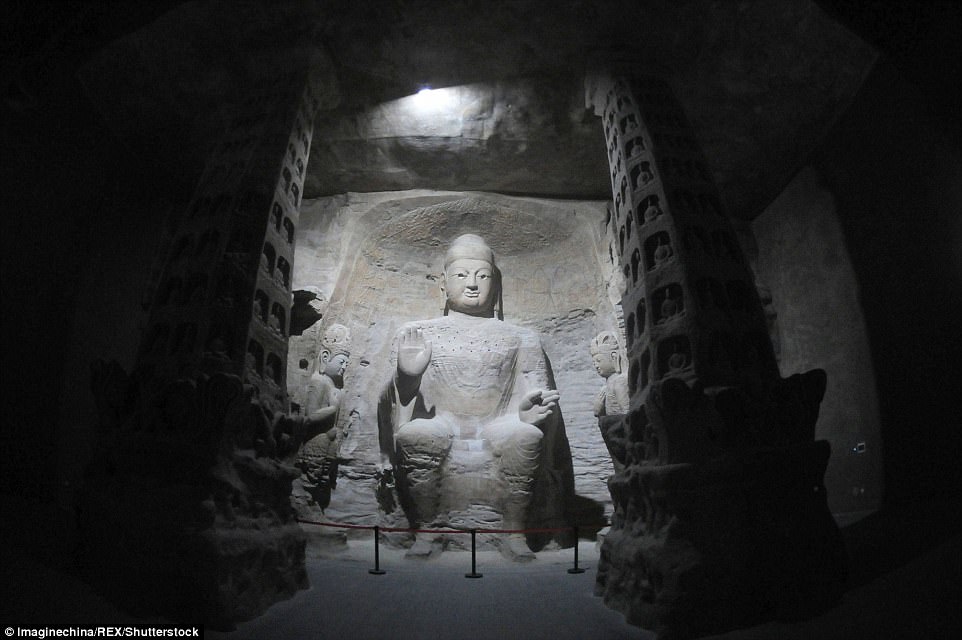 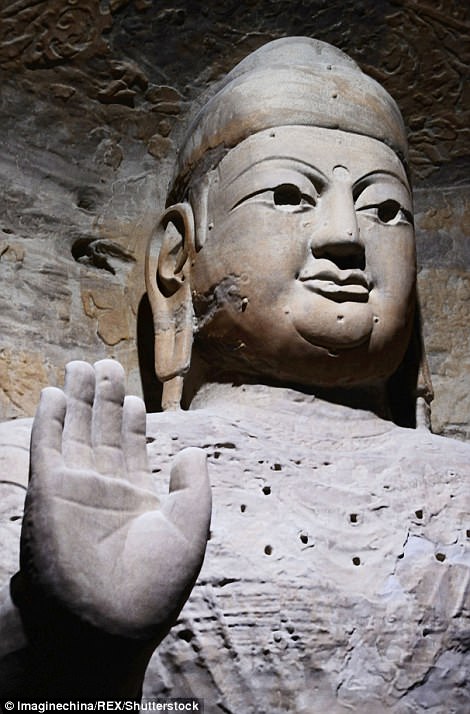 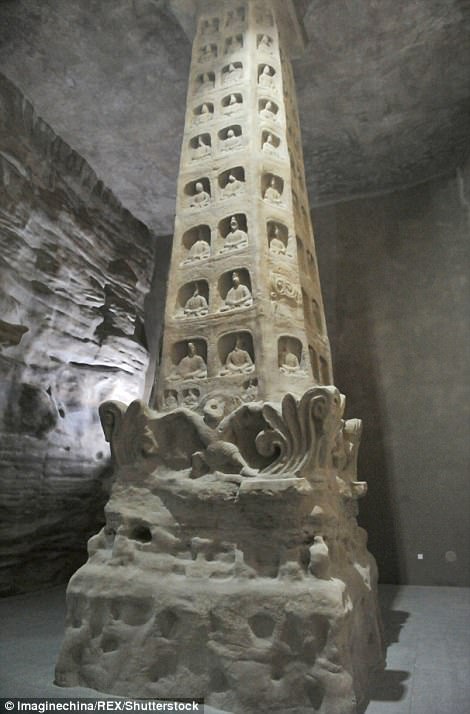 The impressive attraction was created around 1,500 years ago during the Northern Wei Dynasty.

The dynasty, which lasted from 386 to 534, was significant in terms of its religious influence in China.

It was when Buddhist had its first peak after being introduced to China from India.

There are 252 caves and 51,000 statues in Yungang, which represent the outstanding achievement of Buddhist cave art, according to UNESCO World Heritage.

They took nearly 10,000 pictures of the grotto at different angles and heights to build a digital model of it.

They also had special 3D printers built which could print products with the maximum length, width and height of 1.2 metres (3.9 feet).

Diao Changyu, the assistant to Dean of the Heritage Research Centre of Zhejiang University, told China Central Television Station: 'The whole model was divided into 842 pieces.

'These 842 pieces were then printed out by 20 3D printers during six months time. The printing process went on day and night without stopping.'

The technicians then put the 842 pieces together before artists painted and sprayed sand over the replicated cave to imitate the texture of the original grotto.

The copy of the West Empress Chamber, almost indistinguishable from the original, is being displayed in the eastern coastal city of Qingdao.

The exhibition is part of the Yungang Grottoes art gallery, which opened to the public on December 16.

Experts are currently re-producing the number 12 and 18 grottoes of Yungang. 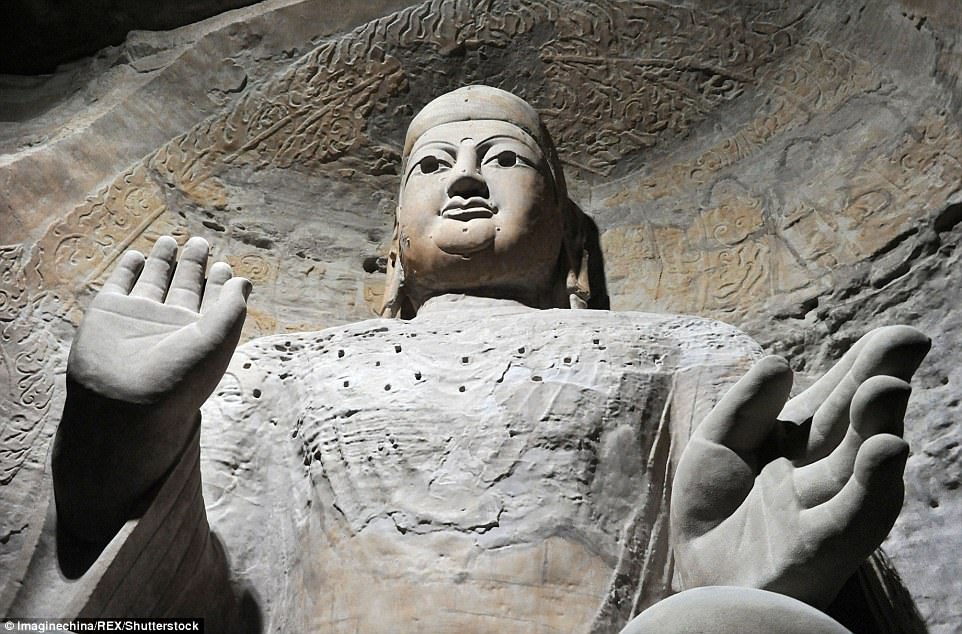 The replica was made by 20 3D printers, which worked day and night non-stop for six months to make 842 separate pieces 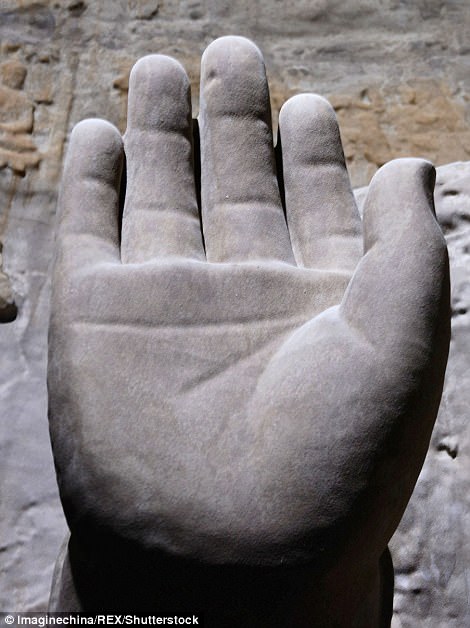 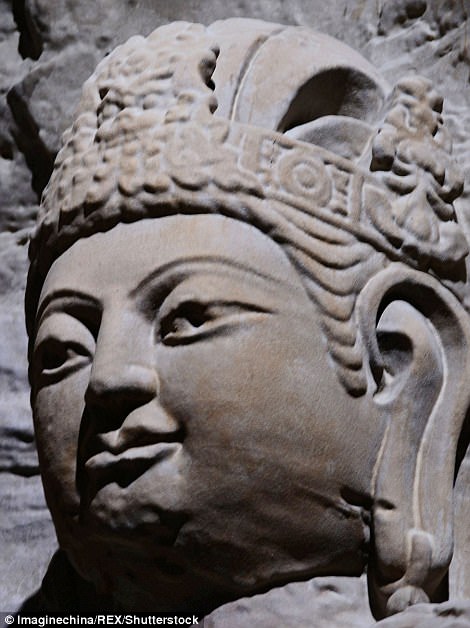 'West Empress Chamber', created in the Northern Wei Dynasty when the religion flourished in China, is exquisite. Above are the details of the copy of the cave which was completed after two years of meticulous work from a Chinese team 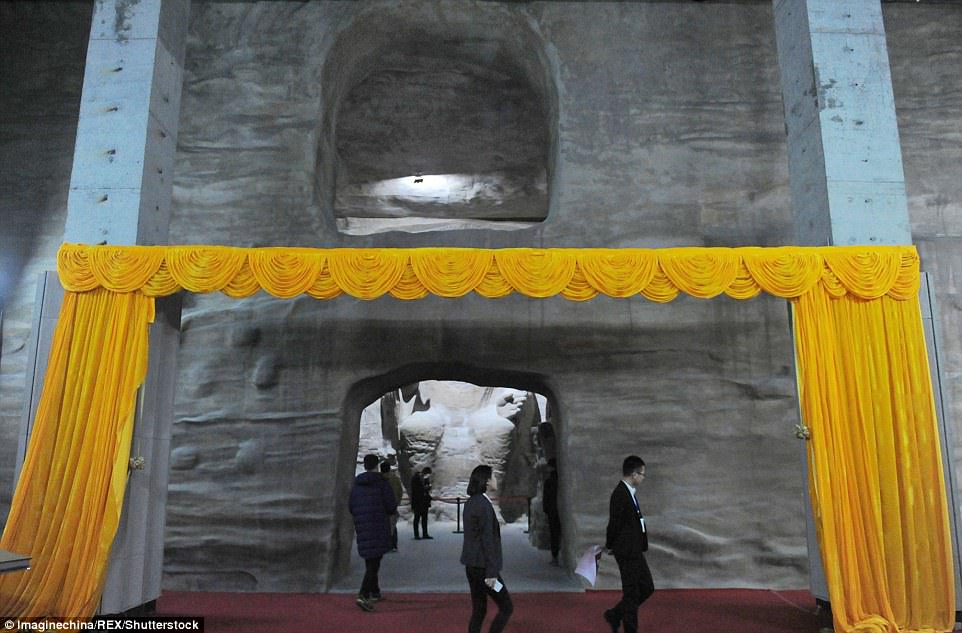 One visitor, named Cai Meijiao, told China Daily: 'It's amazing to see the Buddha figures of Yungang. I plan to visit the grottoes next year.'

According to media, this is the first time experts in China have used 3D printers to replicate an entire attraction.

But apparently the Chinese are not alone.

Researchers from Madrid-based Factum Foundation have started a five-year project to reconstruct the tomb of Pharaoh Seti I also using 3D printing technology, according to CNN.

The tomb of the powerful Pharaoh, who ruled from 1290 to 1279 BC, is the largest tomb in the Valley of the Kings situated on the west bank of the Niles near Luxor.

So far archaeologists and artists have scanned and printed two chambers.

ANALYSIS: History repeating in Austria? Not so fast

Mad Friday: revellers worse for wear across the country