She has been getting into the festive spirit, posting snaps of her children King Cairo, five and Dream, 13 months, donning adorable Christmas hats.

But Blac Chyna was taking a break from mummy duties on Friday night as she enjoyed a night out with pals ahead of the Christmas weekend, looking surprisingly covered-up in an all-black ensemble. 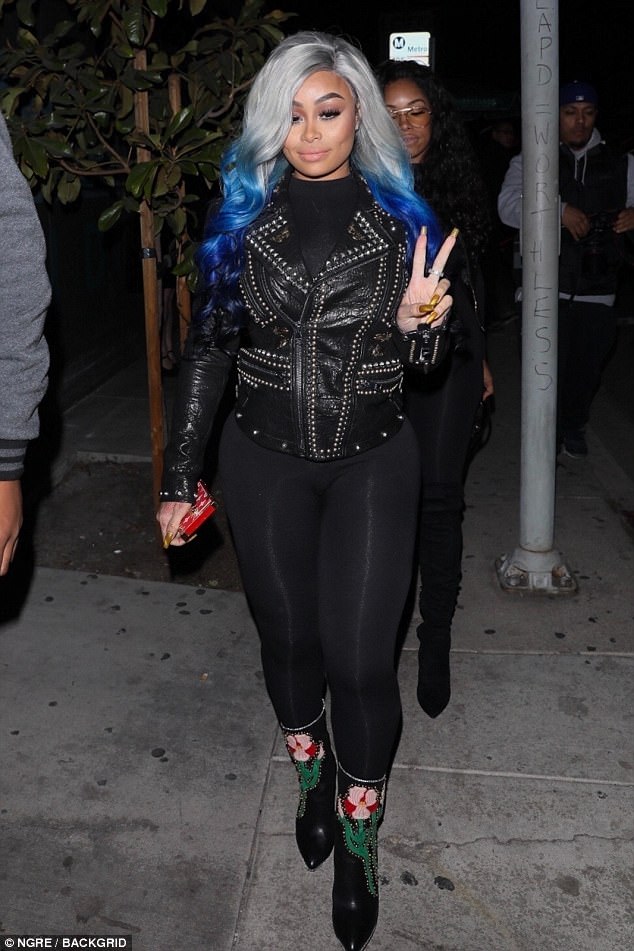 Curvy Queen: Blac Chyna, 29, rocked a surprisingly covered-up ensemble as she enjoyed a night out with friends ahead of the Christmas weekend

Blac showed off her incredible curves in clingy black leggings and polo neck, which the star teamed with floral embroidered ankle boots and a matching leather jacket.

The star had her new look styled into dramatic waves as she flashed a peace sign to the cameras outside the club, rocking long gold nails with the look.

The mother-of-two rocked typically dramatic makeup with the ensemble, with a taupe smoky eye and heavy eyelashes. 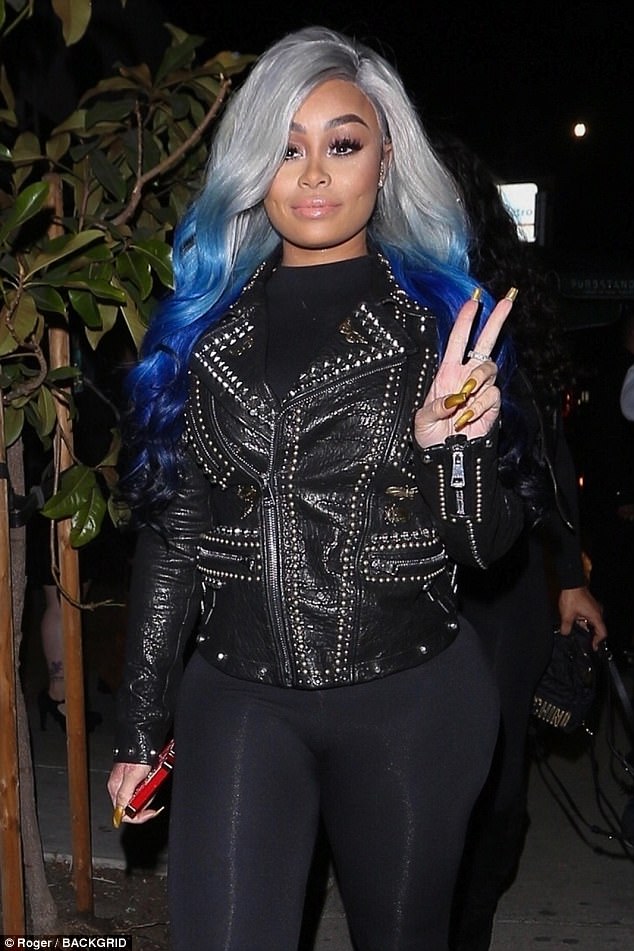 Peace and love: Blac flashed a peace sign to the cameras as she showcased her new electric blue ombre hairdo

Blac recently shared some adorable snaps of little Dream and King Cairo on Snapchat ahead of the festive season, with the kids looking adorable in festive red ensembles.

The star's youngest child is with reality star Rob Kardashian, and she also has a five-year-old son with rapper Tyga, who is the ex of Kylie Jenner.

Mom Chyna is a persona non grata with the reality stars since her tumultuous split and ensuing legal drama with the only Kardashian son, Rob. Chyna is currently suing Kim Kardashian, 37, and momager Kris Jenner, 62. 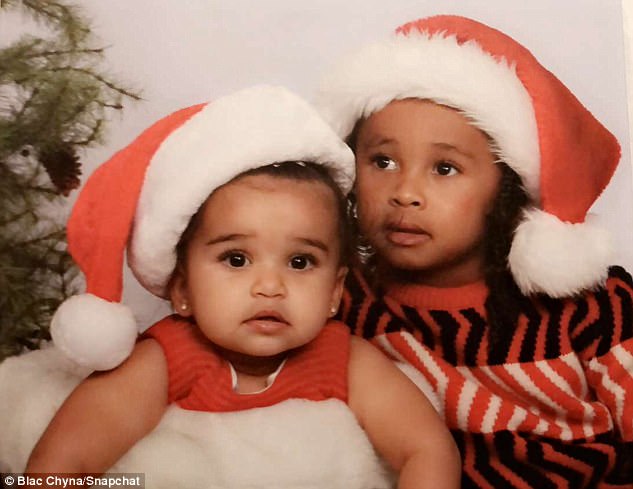 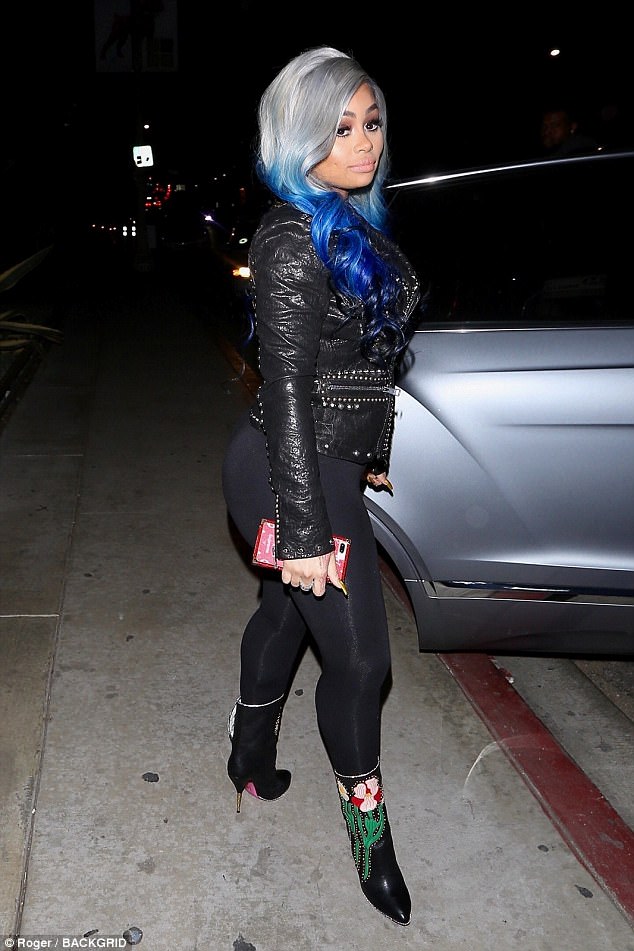 Incredible: Blac had her amazing curves on full display in the skintight leggings and polo neck ensemble, ahead of enjoying Christmas with her two children

Perky: Black had her pert posterior on full display in the ensemble

In the suit she accuses the entertainment juggernauts of using their 'power and influence over the E! network to kill the second season' of Rob & Chyna's reality show, according to TMZ.

Rob is also suing, claiming the Chyna only dated him and became pregnant in an attempt to 'shake down' the very famous family.

Since her relationship with Rob the starlet has moved on romantically, currently linked to 21-year-old Atlanta rapper Playboi Carti. 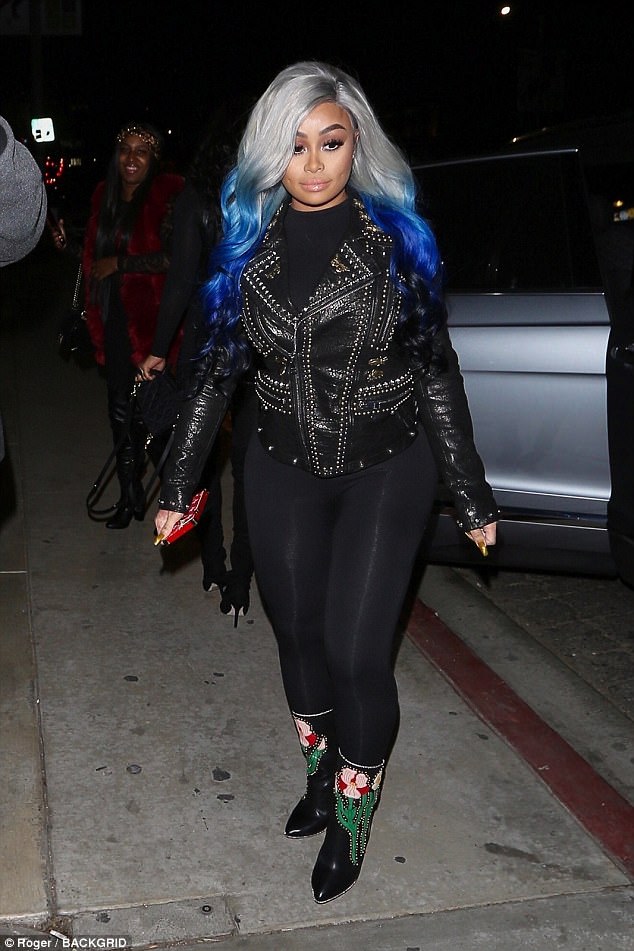