The White House has furiously denied a New York Times report which claims President Trump said 'everyone' from Haiti has AIDS during a June meeting on immigration.

The report was published on Saturday and cited anonymous sources who told The Times reporters' they were either there or had been told about the remarks by others who were there.

Secretary of State Rex Tillerson, White House Chief of Staff General John. Kelly (who was at that time the secretary of homeland security), and domestic policy adviser Stephen Miller were all there.

They said that on the day in question, Trump stormed into the Oval Office clutching 'sheets of papers' which revealed how many immigrants had been allowed into the US since he took office.

He was angry that so many had, they said, and made derogatory remarks about the nations on the list. 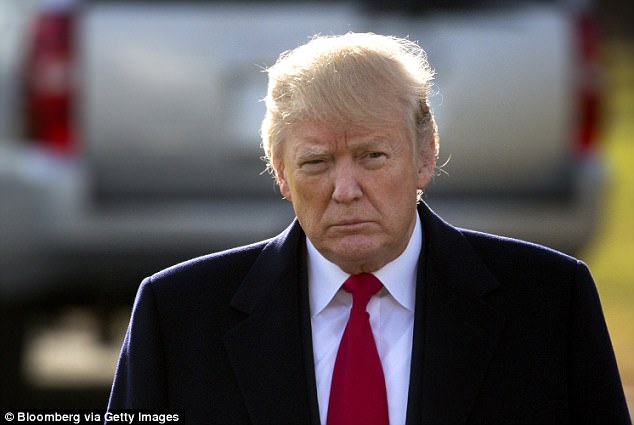 According the sources, when Trump learned 15,000 people from Haiti had been granted US visas, he remarked: 'They all have AIDS'.

Of the 40,000 Nigerian immigrants who had been granted entry, he is alleged to have said they would 'never go back to their huts in Africa' now that they had seen the United States.

'It’s both sad and telling The New York Times would print the lies of their anonymous "sources" anyway,' she said.

The Times cited six officials who were either there or who were briefed on the meeting in its report. 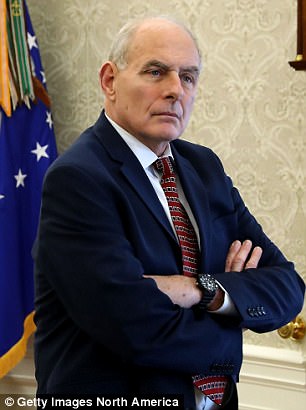 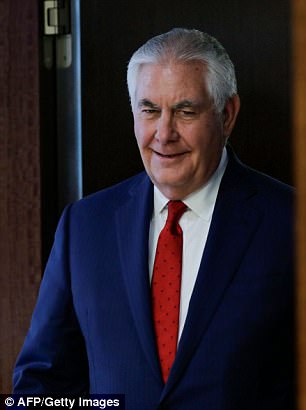 White House Chief of Staff Gen. John Kelly, who was the Secretary of Homeland Security at the time, denied the claims as did Secretary of State Rex Tillerson

One person claimed to have heard him make the remark about Haitians and a second who was not there said they were told about the same remark afterwards.

Those same two sources were the only ones who said they remembered the racist 'huts' remark.

Four others who were there said they did not remember Trump using that language.

The article goes on to describe how some of Trump's most controversial policies and decisions were conceived during the campaign.

Among them was his travel ban against Muslim majority nations which caused hysteria and shock in January when it was briefly imposed then amended.

The unnamed officials said some White House staffers were just as taken by surprise as the rest of the country and that they had to Google which countries were affected.

Miller, the sources said, held a meeting the day after it went into effect to tell them to 'tune out the whining'.