By Katie French For Mailonline

Britons are stealing £3.2 billion worth of goods each year – equating to around £5 per person a month.

Almost one in four admit to stealing at least one item without paying while a study shows theft from unmanned checkouts has more than doubled in the past four years.

The research, carried out by VoucherCodesPro.co.uk, found regional variations with northerners more likely to steal than those living in the south of England.

Supermarkets appear to be the hardest hit with the likes of Tesco, Sainsbury's, Morrisons and Waitrose introducing self-scan check outs to key stores in recent years. 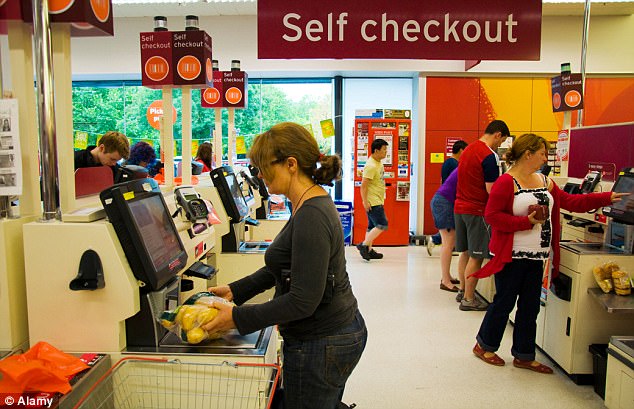 Toiletries, fruit and vegetables and dairy products are the most common items to be taken with almost half of those who admitted to stealing claim to do so regularly, The Times reports.

However the findings may not mean British society is experiencing a collapse in public morals.

The survey suggests the machines do not always work properly which leads to customers bagging items they have unknowingly not paid for.

When pressed on why they had taken the item for free, 62 per cent said it wouldn't scan or register.

A further third claimed they had forgotten to pay for it and only realised after arriving home. 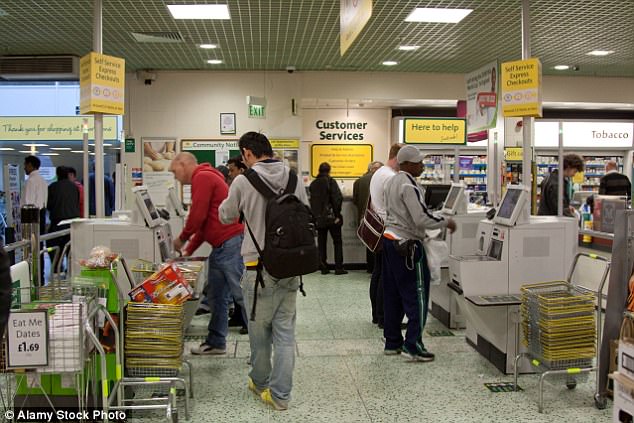 Toiletries, fruit and vegetables and dairy products are the most common items to be taken

But a perhaps more honest two fifths of those asked said they had stolen because they knew they could get away with it.

Across the country there are an estimated 50,000 self-scan checkouts.

There are an estimated 50,000 selfservice tills across Britain, with Tesco alone operating more than 12,000. They were introduced in the 1990s and save shops from having to pay for cashiers. Studies show that shops that use the tills experience nearly double the industry average in losses from shoplifting.

The survey of a representative sample of more than 2,000 people found that the average amount taken by those who steal from the checkouts is almost £23 a month or £3.2 billion collectively a year. The same study in 2014 found Britons took only £1.3 billion that year.

Last month the Office for National Statistics reported that the number of shoplifting offences jumped by more than 10 per cent in a year, after increases in previous years.

George Charles, a spokesman for VoucherCodesPro.co.uk, which conducted the study, said: "I'm sure most of those who now admit to stealing via self-service checkouts didn't initially set out to do so: they may have forgotten to scan something and quickly realised how easy it was to take items without scanning them. No doubt there's an element of risk, but when people start stealing it can be difficult to stop, until you get caught, particularly when money might be tight.

"Supermarkets need to increase the number of staff who monitor the selfscan checkouts, even though the point of these checkouts is to reduce the need for staff, as well as increase security."

The survey revealed large regional variations in the amount taken, with northerners appearing to steal more than their southern cousins.

Of those who admitted taking something, the average monthly value of the items was £33 in northwest England compared with £18 in the South East. The least, £14, was taken in east England. Scots stole the second highest amount at £31 a month. Residents of London took an average of £24.