CAIRO (AP) – An Egyptian court Saturday convicted former Islamist President Mohammed Morsi and 18 others of insulting the judiciary, sentencing them to three years in prison in a court session aired on TV.

The case involves a total of 24 defendants, five of whom including prominent rights activist Alaa Abdel-Fattah and political analyst Amr Hamzawy, were fined 30,000 Egyptian pounds each ($1,688). Abdel-Fattah is serving a five-year sentence for taking part in an illegal protest in 2013. Hamzawy lives in exile.

All the defendants are accused of insulting the judiciary by making statements that were made public either on TV, radio, social media or in publications that the court found to be inciting and expressing hatred toward the court and the judiciary. 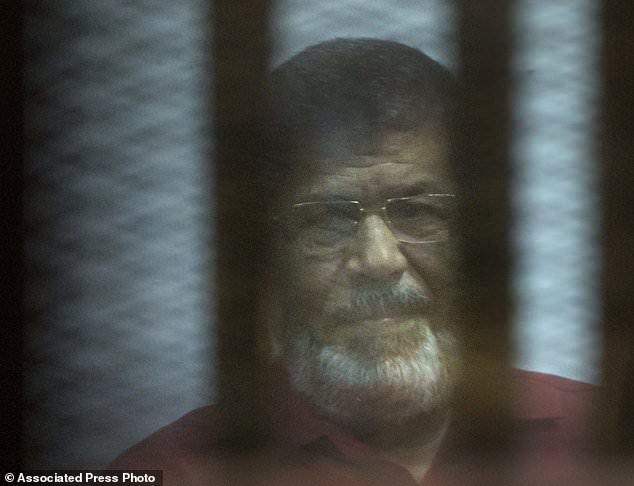 FILE – In this April 23, 2016, file photo, ousted Egyptian President Mohammed Morsi, wearing a red jumpsuit that designates he has been sentenced to death, sits inside a defendants cage in a makeshift courtroom at the national police academy, in an eastern suburb of Cairo, Egypt.An Egyptian court has convicted former Islamist President Mohammed Morsi and 18 others over insulting the judiciary, sentencing them to three years in prison. (AP Photo/Amr Nabil, File)

The verdict can be appealed.

Abdel-Fattah is an outspoken blogger and an icon of the 2011 uprising that toppled longtime autocrat Hosni Mubarak. He has been in and out of prison in the years since Mubarak's ouster. A software engineer by profession, he also campaigned against the policies of the military council that ruled Egypt for nearly 17 months following Mubarak's ouster.

Since his ouster, Morsi has since faced trial on a host of charges, including espionage and conspiring with foreign groups.

The former president, who hailed from the now-outlawed Muslim Brotherhood group, is serving a life sentence – 25 years – over accusations of spying for Qatar. Earlier, he was handed a 20-year sentence on charges arising from the killing of protesters in December 2012.

Following Morsi's overthrow, Egyptian authorities launched a severe crack down on Islamists, jailing thousands of them as well as secular and liberal activists. The government has also banned all unauthorized demonstrations under a law adopted in late 2013.

Milan not pretty but Gattuso happy with teamwork