ZEBULON, Ga. (AP) – When a young black man was found slain outside Griffin, Georgia, in 1983, his family was too traumatized to put a headstone on his grave.

Not knowing who killed Timothy Wayne Coggins or if the killer might come back to vandalize a well-marked burial site, they held a hurried, fearful funeral and left it unadorned, his niece Heather Coggins said.

Now, 34 years later, after two white men have been charged in the racially-tinged cold-case, Timothy Coggins' grave has finally been marked with his name. 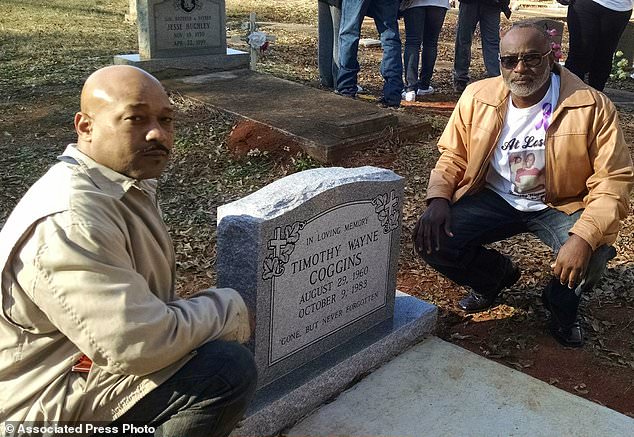 Ramon, left, and Tyrone Coggins, brothers of Timothy Wayne Coggins, pose beside the new headstone on Timothy Coggins' grave in Zebulon, Ga. Saturday, Dec. 30, 2017. Timothy Wayne Coggins was killed in 1983. His slaying remained unsolved for decades. In October 2017, authorities charged two men with killing him. Prosecutors said the black victim was killed for socializing with a white female. The Coggins family dedicated the new headstone on Saturday. (AP Photo/Don Schanche)

The Coggins family unveiled the new headstone Saturday at their home church in Zebulon, Georgia, about 50 miles (80 kilometers) south of Atlanta.

"This has been a very dark cloud on our family. But today we can see the sun will shine again," said Tyrone Coggins, a brother of the slain man, during a rousing, 90-minute memorial service at Fuller's Chapel United Methodist Church.

Timothy Coggins' body was found by hunters in a field not far from a highway in the Sunny Side community a few miles north of Griffin.

The killing remained unsolved until last October when authorities announced the arrests of Frankie Gebhardt, 59, and Bill Moore Sr., 58. Arrest warrants accuse them of stabbing and slicing Coggins to death and giving him "seriously disfiguring" wounds. At a hearing in November, a prosecutor said Coggins was also dragged through the woods behind a pickup truck. Griffin Judicial Circuit District Attorney Ben Coker said the 23-year-old Coggins was killed because he had been "socializing with a white female."

Heather Coggins has said the family long suspected that his death was somehow linked to racism. She said they were too afraid to mark her uncle's grave at the time he was killed, and as time went by it was just left unmarked. But after suspects were charged in his slaying, she said relatives chipped in to buy the headstone.

The little country church was filled with members of the large, extended family, many of them wearing T-shirts adorned with Timothy Coggins' photo and the words "At Last … Resting in Peace." Many also wore purple ribbons – their slain relative's favorite color.

Many of those who knew Coggins have passed away – and the dozens of cousins, nieces and nephews who packed the church were mostly too young to have known Coggins. But they all grew up hearing stories about his death, said Jennifer Stevenson, 35, who was still a baby when her cousin was killed.

"As his legacy, we feel as though we were robbed," she said. They never got to meet the man who was known for his charming smile and smooth dance moves. And Coggins himself never got to marry, settle down, have a career and know the generation that came after him.

"Our family is amazing, and we are confident he would have been proud of us," Stevenson said during the service, which featured gospel music from a family choir and interpretive dance by some of the children.

"He always wanted to make sure everyone got home safely," said Tyrone Coggins. "This is confirmation to the family that 34 years later, Tim made it home." 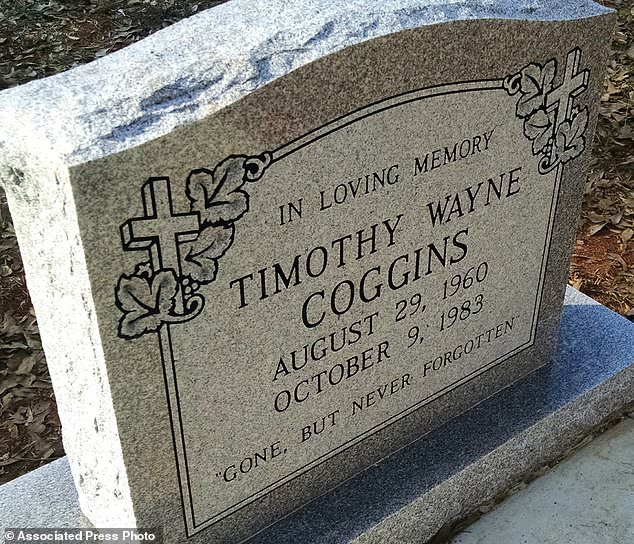 A new headstone is displayed on the grave of Timothy Wayne Coggins in Zebulon, Ga., Saturday, Dec. 30, 2017. Coggins was killed in 1983. His slaying remained unsolved for decades. In October 2017, authorities charged two men with killing him. Prosecutors said the black victim was killed for socializing with a white female. The Coggins family dedicated the new headstone on Saturday. (AP Photo/Don Schanche) 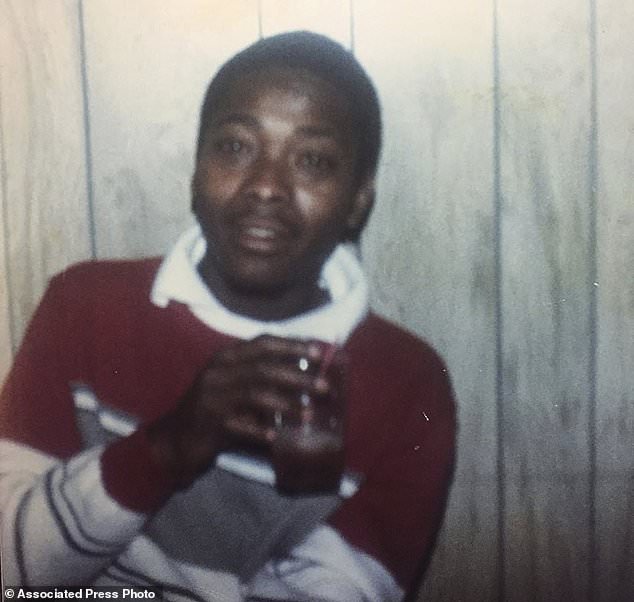 FILE – This undated photo file provided by Heather Coggins shows her uncle Timothy Coggins. When Coggins was found slain outside Griffin, Georgia, in 1983, his family was too traumatized to put a headstone on his grave. Now, 34 years later, after two white men have been charged in the racially-tinged cold-case, Coggins' grave has finally been marked with his name.The Coggins family unveiled the new headstone Saturday, Dec. 30, 2017, at their home church in Zebulon, Georgia, about 50 miles south of Atlanta. (Courtesy of Heather Coggins via AP, File)