Cleveland ended a season of perfect futility on Sunday with a 28-24 loss to the Pittsburgh Steelers that made the Browns just the second team to go 0-16 in an NFL campaign.

Even with star quarterback Ben Roethlisberger and running back Le'Veon Bell sitting out, the Steelers were too much for the Browns — who put up a valiant fight but couldn't avoid joining the 2008 Detroit Lions as the only teams to lose every game in a 16-game season.

"This is going to stay next to my name, this organization's name, this team's name for the rest of our lives," said Browns head coach Hue Jackson. "Nobody wants that. I can't do anything about it. 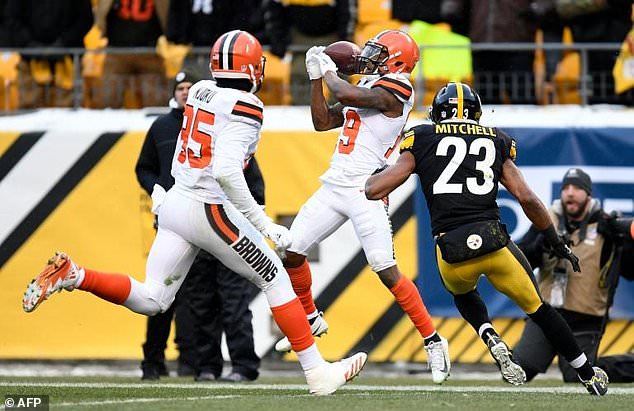 Corey Coleman of the Cleveland Browns cannot come up with a catch while being defended by Mike Mitchell of the Pittsburgh Steelers in the fourth quarter during the game at Heinz Field on December 31, 2017

"We tried. We didn't do it. We didn't finish. We'll wear it until we can take it off, but we'll take it off soon. I promise you that."

After Pittsburgh took a quick 14-0 lead, Cleveland rallied to knot the score at 21-21 early in the third quarter.

But on the ensuing kickoff, JuJu Smith-Schuster returned the kickoff 96 yards for a touchdown to put the Steelers ahead 28-21.

Cleveland managed to tack on a 51-yard field goal.

But they couldn't capitalize on their chances in the fourth quarter.

Miscues included Duke Johnson Jr's fumble on the Pittsburgh 31-yard-line, a DeShone Kizer interception by Sean Davis and a heartbreaking dropped pass by Corey Coleman on a fourth-down-and-two play on the Pittsburgh 11 yard line.

Rookie quarterback Kizer had avoided a sack and threw to the wide-open Coleman, but he dropped the ball for what would have been a first-down with 1:46 to play.

Instead, the Steelers were able to run out the clock, and the botched play will be remembered as emblematic of the entire dispiriting season.

"I'll put my arms around him and say, 'You have to make those plays,'" Jackson said. "And he knows that. It's tough. That play will be remembered."

Despite the reversals, the Browns tried to keep the pressure on.

"They just kept pushing, kept fighting all the way to the end," Steelers cornerback Joe Haden said of his former team.

Trailing 0-14, the Browns cut the lead in half with the aid of Kizer's 54-yard throw to Josh Gordon, which set up Johnson's two-yard score.

Pittsburgh responded with a 75-yard TD drive that pushed their lead to 21-7, but Cleveland scored again on Kizer's 56-yard pass to Rashard Higgins that cut the deficit to 21-14.

Cleveland tied the game on their first possession of the second half, but they could never get in front.

"We fought for it," Gordon said. "We really fought for it. Everybody showed up playing with heart, showing resiliency, showed determination to go try and get a win to finish this season on a good note.

"Unfortunately we couldn't get the W, but you could see how close we were."