She recently slammed rumours that she was expecting, after appearing to sport a baby bump in a stylish Instagram snap.

And Kendall Jenner continued to put the pregnancy rumours to bed on Tuesday, flashing her abs in a revealing white crop top. 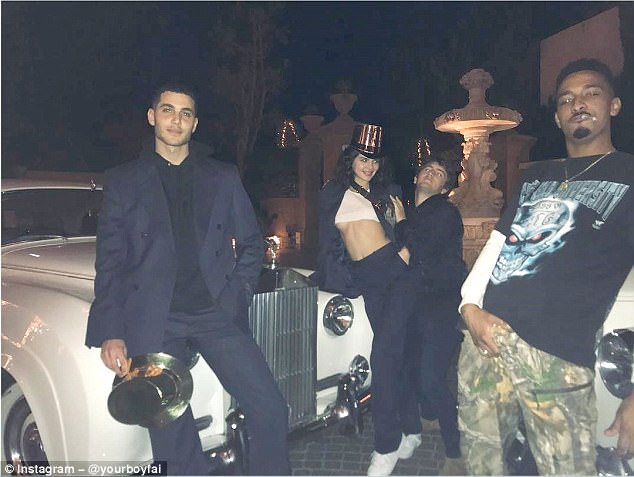 Skimpy: Kendall Jenner rang in 2018 in style as she posed atop a vintage Rolls Royce Dove car with socialite pal Fai Khadra, ahead of Dave Chappelle's NYE bash 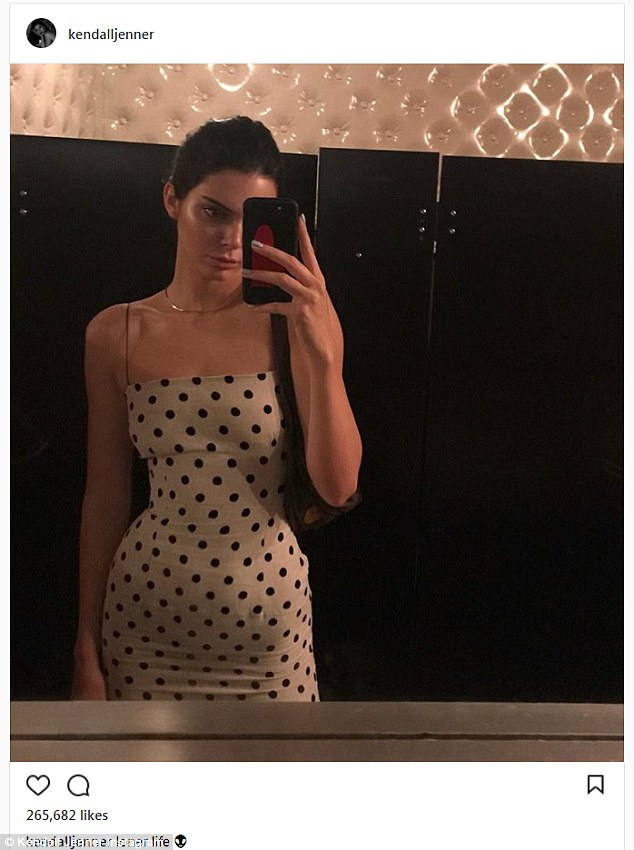 Ending those rumours: Kendall's fans questioned whether or not she could be pregnant when she posted this snap the day before, but she told them she had simply been eating bagels

Kendall sported a novelty New Year's hat as she flaunted her model physique in the otherwise black ensemble, flashing a hint of underboob in one of the snaps.

Any rumours that Kylie was expecting were put to bed by the snaps, after the star slammed the claims by tweeting: 'I just like bagels ok!'

Fans rushed to comment on the snap posted last Friday, speculating that she could be pregnant due to her tight dress appearing to hint at a slightly fuller stomach.

One commented: 'She looks pregnant in this pic,' while another wrote: 'Why does she look pregnant? Her tummy looks big.' 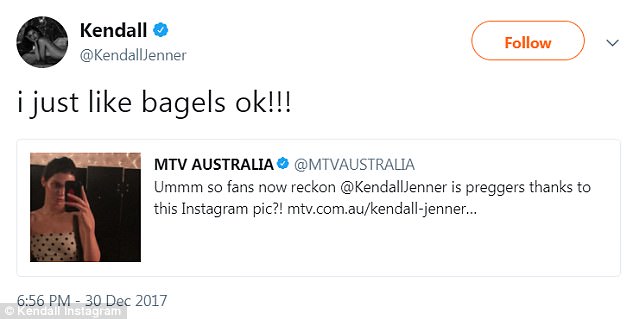 She loves carbs! Although many people speculated that the former Victoria's Secret model was showing off her baby bump, Kendall simply replied, 'I just like bagels ok!!!'

Is she expecting? Fans were rife with speculation over the snap posted last Friday, saying the star looked as if she might be pregnant

Kendall was also seen showing off her incredible figure with pal Bella Hadid, who posed in snaps posted to the stars Instagrams.

The brunette beauty certainly stood out among her male posse posing on the vintage cars, before heading into the exclusive West Hollywood bash.

Flashing her cleavage in a skimpy black top, Bella kept her ebony tresses in a chic high ponytail as she put on a playful display with her pal. 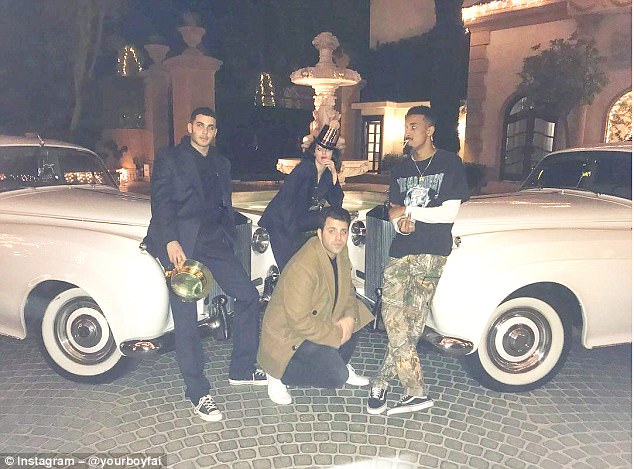 Stylish: Kendall showed off her incredible figure in an all-black ensemble as she posed in snaps posted to Fai's Instagram 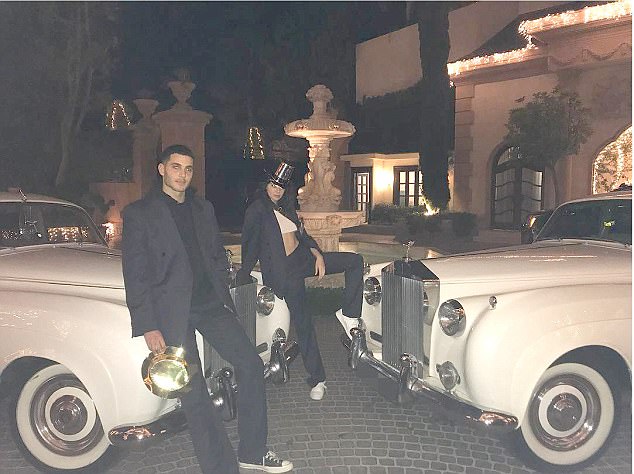 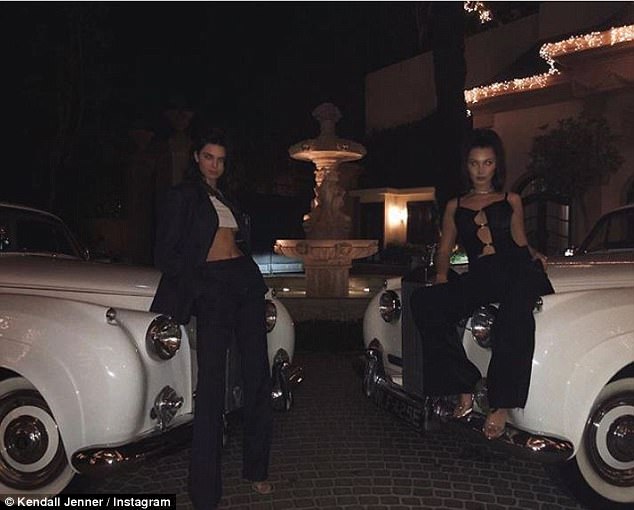 Besties: Kendall was joined at the bash by pal Bella Hadid, 21, who struggled to contain her ample cleave in a revealing all-black ensemble 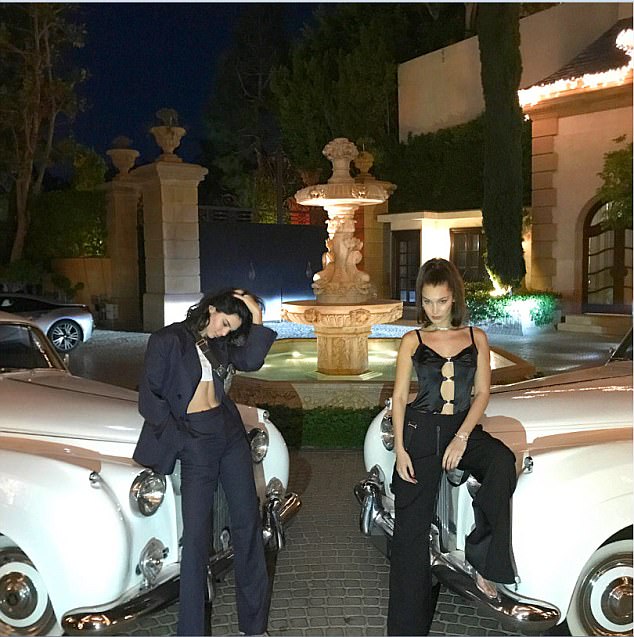 Model pals: Kendall and Jenner showed off their amazing figures in the stylish snaps, posing atop the white Rolls Royce Dove cars 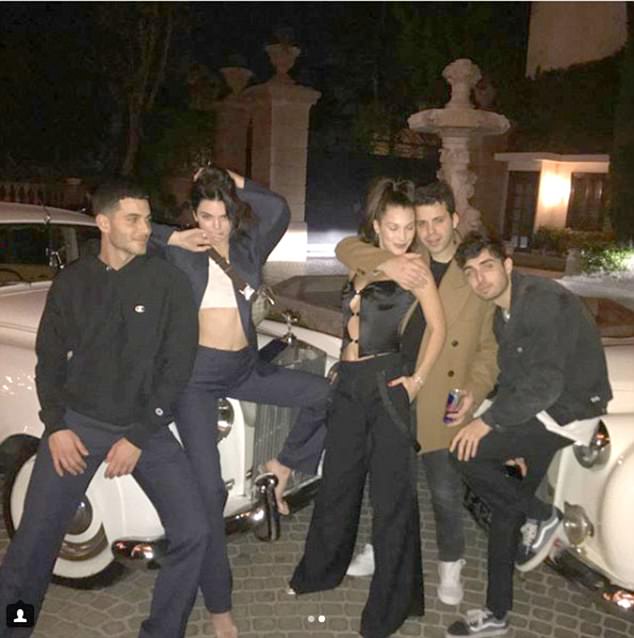 Pals: In snaps posted to Bella's Instagram, the pair could be seen getting ready for a night of partying with some male pals

Bella, the daughter of Mohammed and Yolanda Hadid, later pulled up in the classic car outside Delilah, an exclusive nightclub in West Hollywood.

The Dior Beauty model stepped out of the car with friends around 1:30am, wearing the same outfit she'd been pictured in earlier as she entered the LA hotspot.

Comedian Dave Chapelle hosted the party, which featured such guests as Drake, Stevie Wonder and Bobby Brown, according to TMZ. 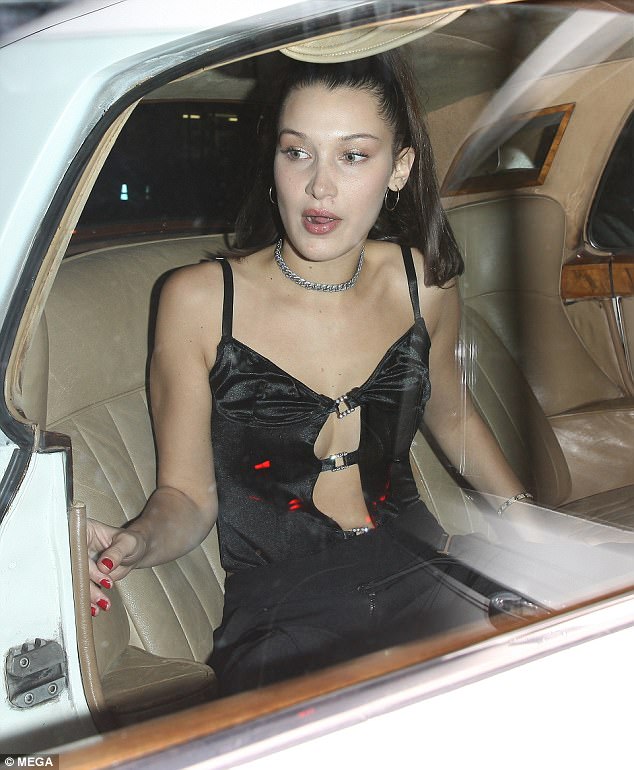 She's got a lot of front: In the early hours of Monday, Bella headed into the exclusive New Years Eve party in West Hollywood hosted by Dave Chapelle 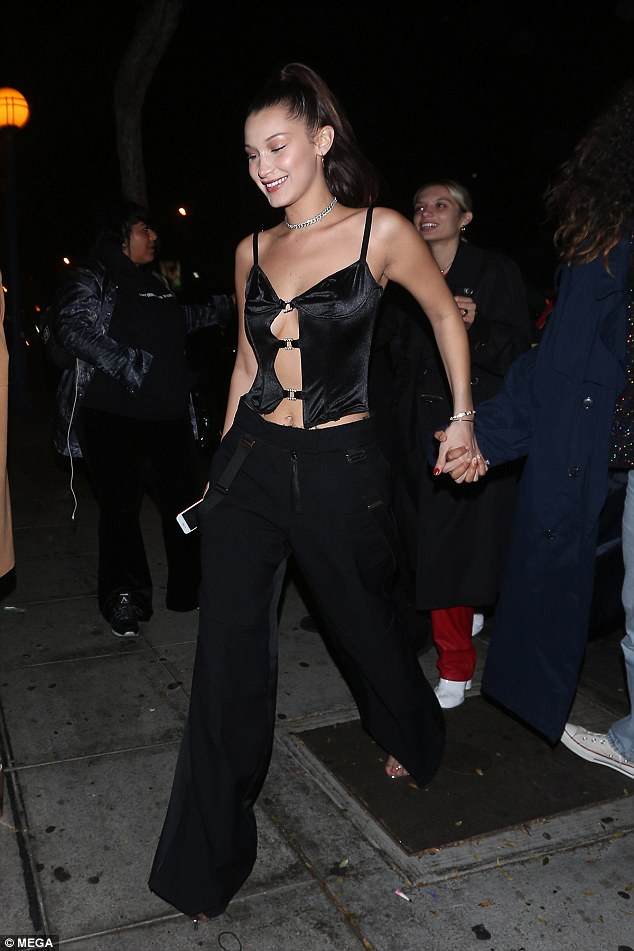 Back in black: Bella wore a black, cleavage exhibiting top, the clasps of which were barely able to contain the braless beauty's assets, paired with black trousers and clear heels 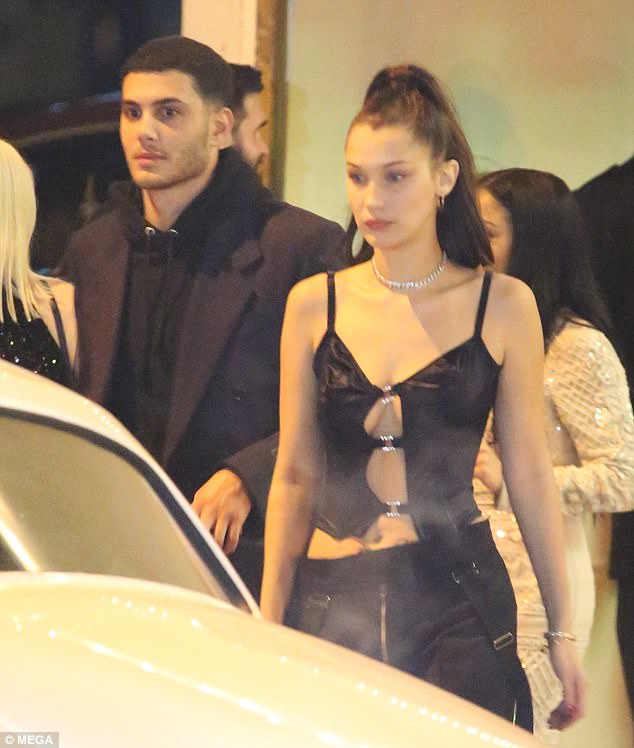 Late night: The former flame of The Weeknd left the club around 5am with socialite Fai Khadra 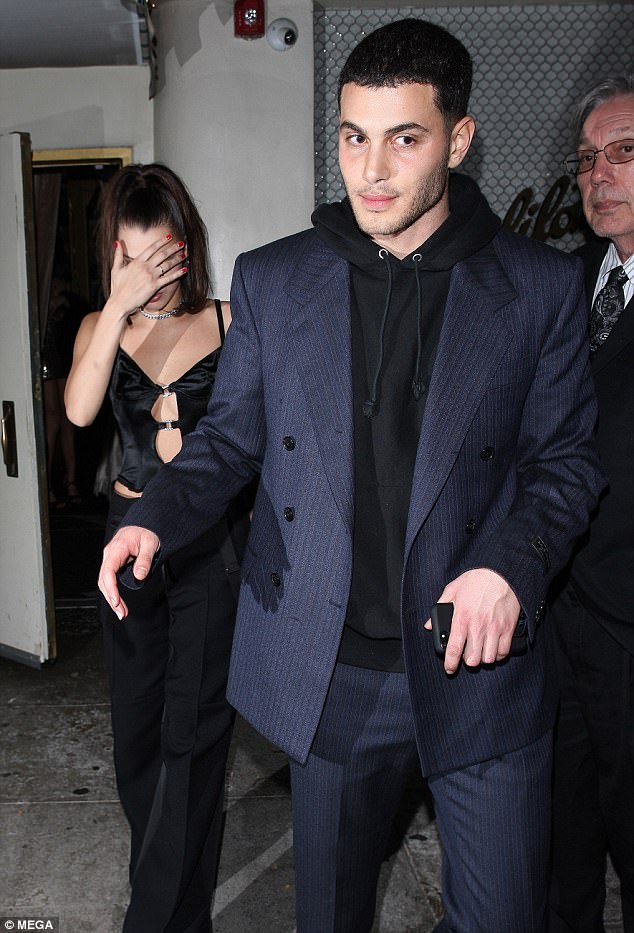 Model friends: The 26-year-old, who wore a blazer over a hooded sweatshirt, had formerly been romantically linked with Kendall Jenner back in 2016

The former flame of The Weeknd left the club around 5am with socialite Fai Khadra.

The 26-year-old, who wore a blazer over a hooded sweatshirt, had formerly been romantically linked with Kendall Jenner back in 2016.

The 5'9" model covered her face with her hand as the pair left Delilah. 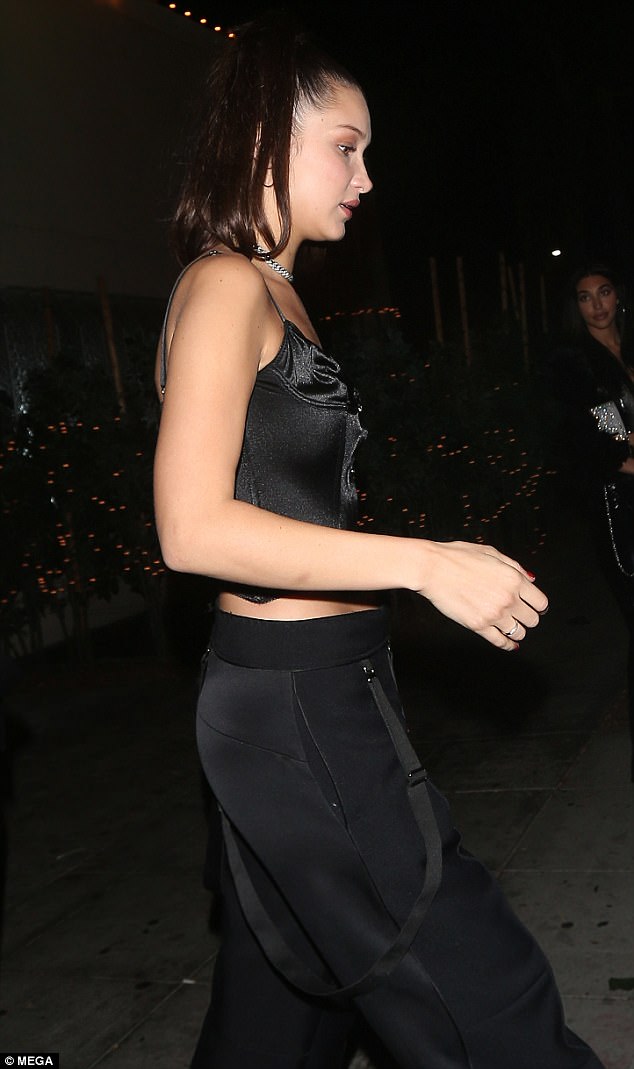 Taking it easy: The 5'9" model looked alert and none the worse for wear as the pair left Delilah at 5am

Brooke Vincent reveals she has QUIT smoking for DOI

Seaplane passenger claims his aircraft fell from the sky