By Valerie Siebert For Dailymail.com

After receiving a frustratingly over-wrapped present for Christmas in 2015 from his sister, one man used this holiday season to exact his revenge.

An Imgur user going by the name of gileriodekel revealed his plan on the website shortly before Christmas with a post entitled 'Revenge of the Obnoxious Christmas Present'.

'In 2015, my sister gave me a candy bar wrapped in a whole roll of packing tape,' he wrote. 'It was a pain in the a** to open and took forever. This year my wife and I teamed up to pay my sister back.' 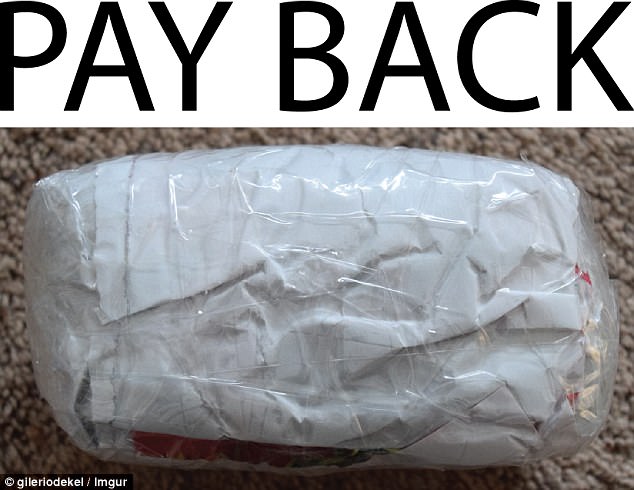 The start: A man whose sister gave him a prank gift of a chocolate bar wrapped in a roll of packing tape decided to get back at her this year 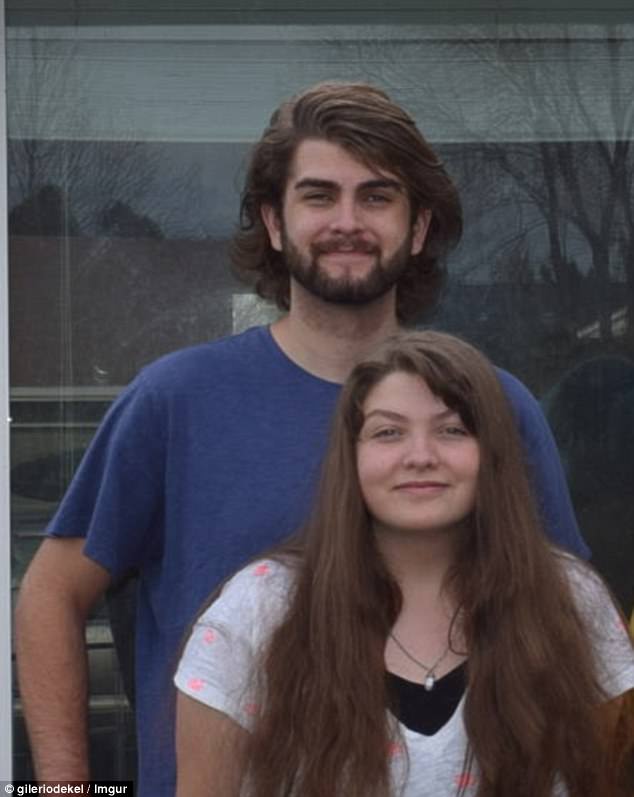 Hitting back: Imgur user going by the name of gileriodekel (pictured) took two years before exacting his revenge 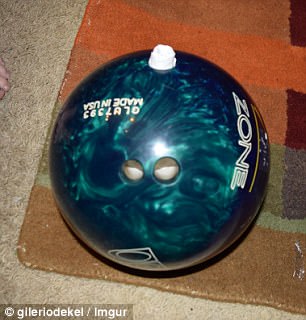 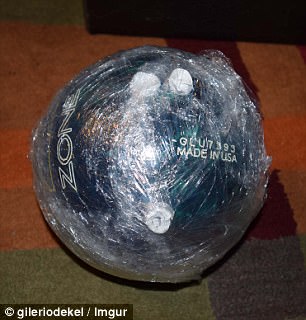 Making of a masterpiece: The project began with a thrift store bowling ball which he and his wife packed with a $40 note and two other 'decoy notes'

The devious plan began with a bowling ball found at a thrift store, which the schemers then stuffed with $40 in cash via the thumb hole.

The other finger holes were stuffed with 'decoy' notes reading 'wrong one try again' to cause further frustration.

With that step complete, the wrapping begins, starting with several layers of plastic wrap around the ball. The next step? Shortening.

'We decided to make the heavy bowling ball slippery by smearing shortening all over it,' the user wrote, adding that they layered the substance before wrapping it once again in even more plastic wrap. 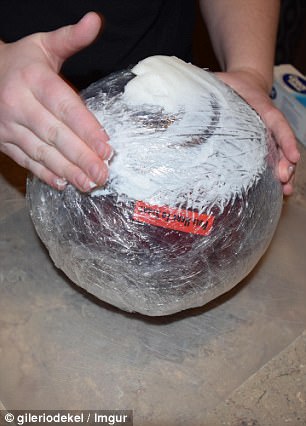 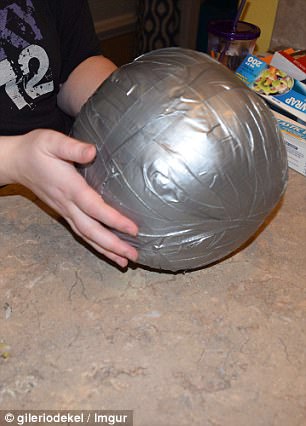 Odd addition: The ball was wrapped in plastic wrap, duct tape, and even smothered in shortening 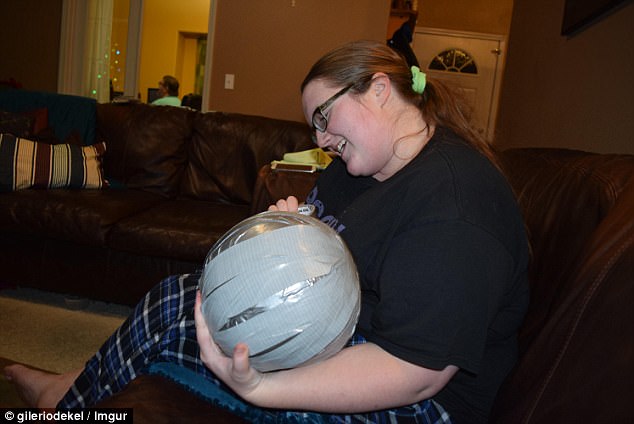 Last one: After several more layers of plastic wrap and duct tape, the last roll was applied with the sticky side facing out 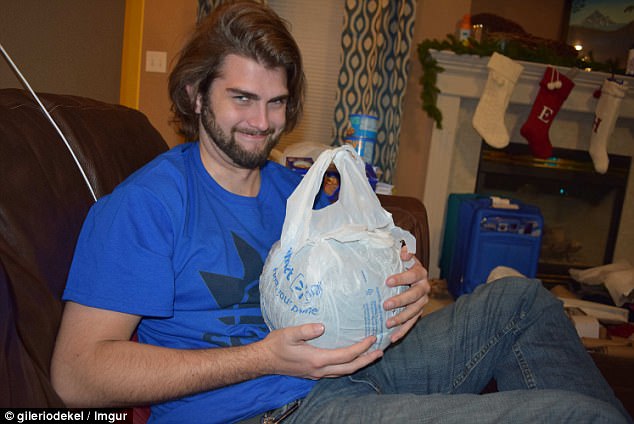 Evil grin: The pair put the now-sticky ball into a simple plastic bag, making it impossible to remove 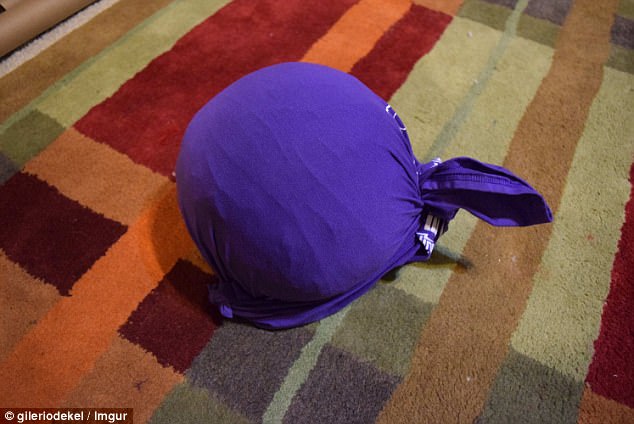 Around again: The whole thing was then wrapped in a purple T-shirt, but things weren't over yet 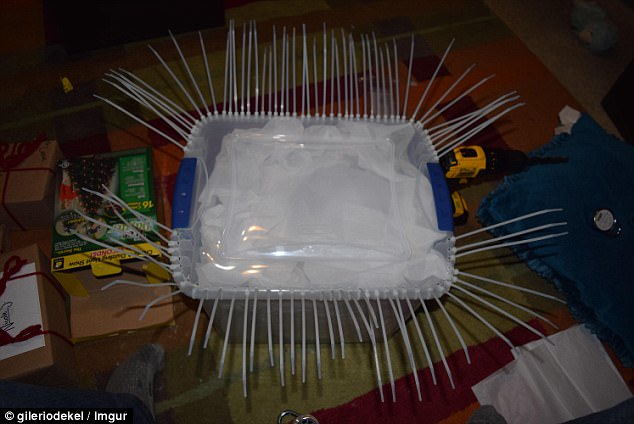 Time and effort: The ball was put into a box that was fastened with a ridiculous 83 zip ties

'We used almost a full roll of saran wrap and half a container of shortening when all was said and done.'

Next up was duct tape, which the user and his wife continually wrapped until two rolls were used up. They even cut and switched direction multiple times to make it even more difficult to take apart.

But this was only the halfway point. Another layer of plastic wrap is followed by another full roll of duct take later, which is followed by yet another roll, but this time with the sticky side of the tape facing outwards.

The sphere is placed into a plastic bag and then wrapped in a T-shirt before the first box is introduced to the mix. 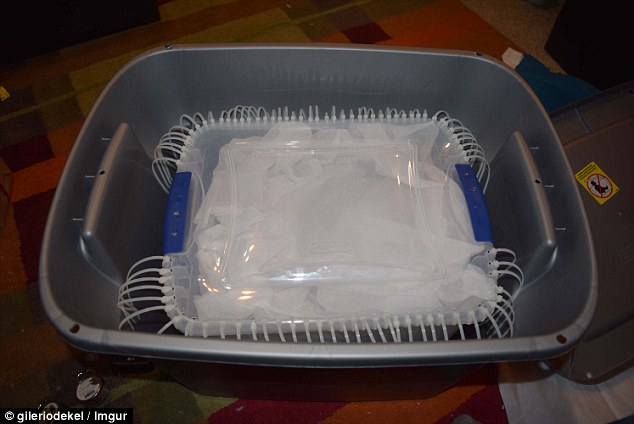 Another layer: The box, which was filled with tissue to obscure the contents was then lowered into another tub 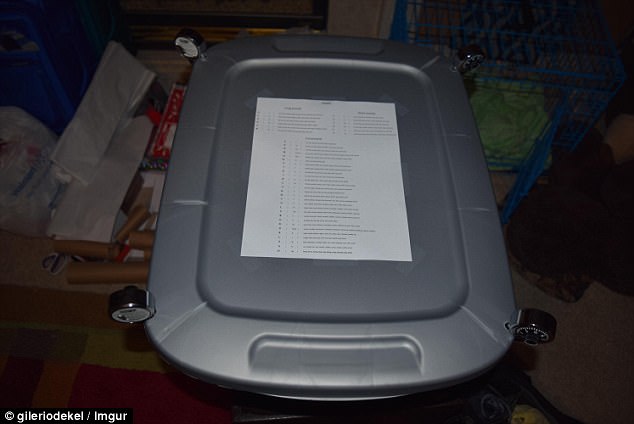 Last step: The box was fastened with four combination locks and topped with a series of riddles to be solved 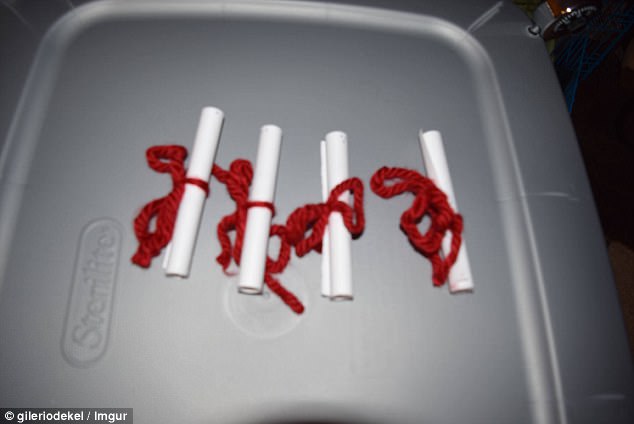 Leading the way: Each of the combinations for the locks were hidden away on these notes

'I drilled 83 holes along the lip and lid of the box,' the user explained. 'I put the ball inside with tissue paper so she can't see whats inside and then zip tied it 83 times. The way I zip tied it it'll be almost impossible to cut with scissors.'

This box was then inserted into a slightly bigger box, which is fastened on each corner with a combination lock numbered one to four. To find the combination, the user devised a number of riddles for his sister to solve.

'My whole family is Mormon and I'm a huge history geek,' he wrote. 'I thought it would be cool to code the riddles in the Deseret Alphabet, which is English with a phonetic alphabet that the Mormons developed in the 1850.'

After showing off images of the final product, he wrote 'Let's hope she takes it well! I'm planning on filming the whole thing or until she gives up. I'll post it if I'm able to!'

Universities that do and don’t track student suicides