The former Bachelor star will be taking part in a charity run for bowel cancer in Adelaide next week.

And Matty J was seen working up a sweat as he prepared for the event with his trainer on Thursday in Sydney's Coogee.

The 30-year-old was put through his paces and it even looked like he struggled to keep the pace with the group. 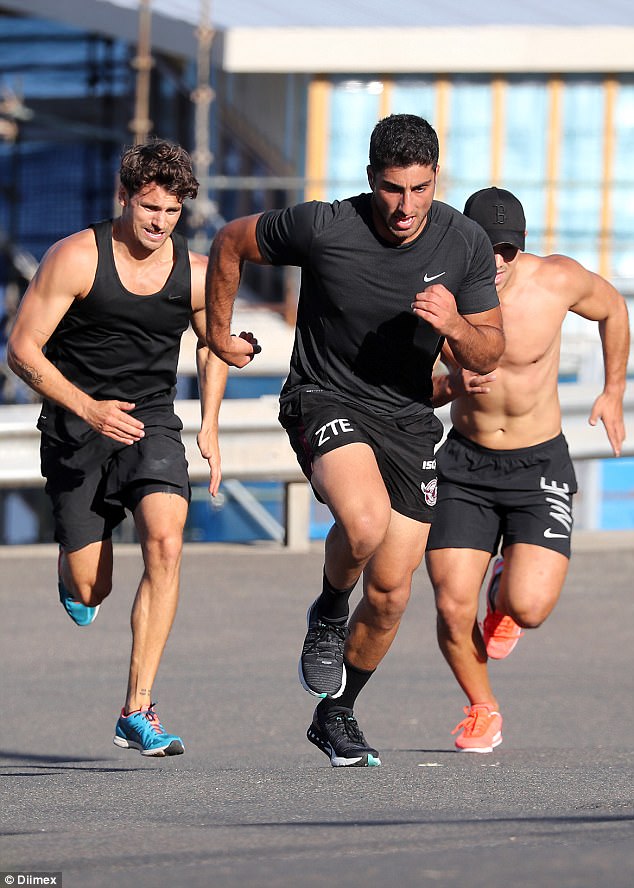 The fit men were all seen bounding up the road with determined looks on their faces.

Matty J appeared to tense up as he clenched his fists to focus on speed and power up the road's incline. 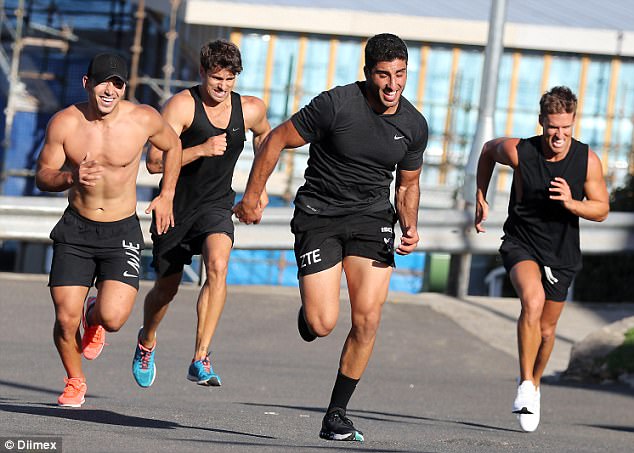 Falling behind? Matty J appeared to tense up as he clenched his fists to focus on speed and power up the slope to catch up to the group 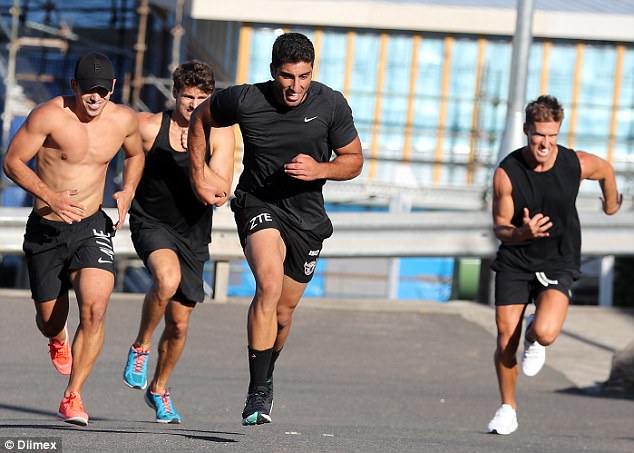 'The crew': Celebrity personal trainer Jono Castano-Acero (middle) was believed to have organised the workout session, introducing each member of the 'crew' on social as rugby player Christian Yassmin(L) and Fox Sports presenter Matt Suleau (R)

However, it appears Matty J remained behind the pack for many of the drills.

Wearing a Nike black singlet, his bulging biceps and pecs were seen glistening in sweat in the hot summer's day.

He looked exhausted as he neared the end of the training, while his trainer managed to hold a smile throughout the intense energetic exercises. 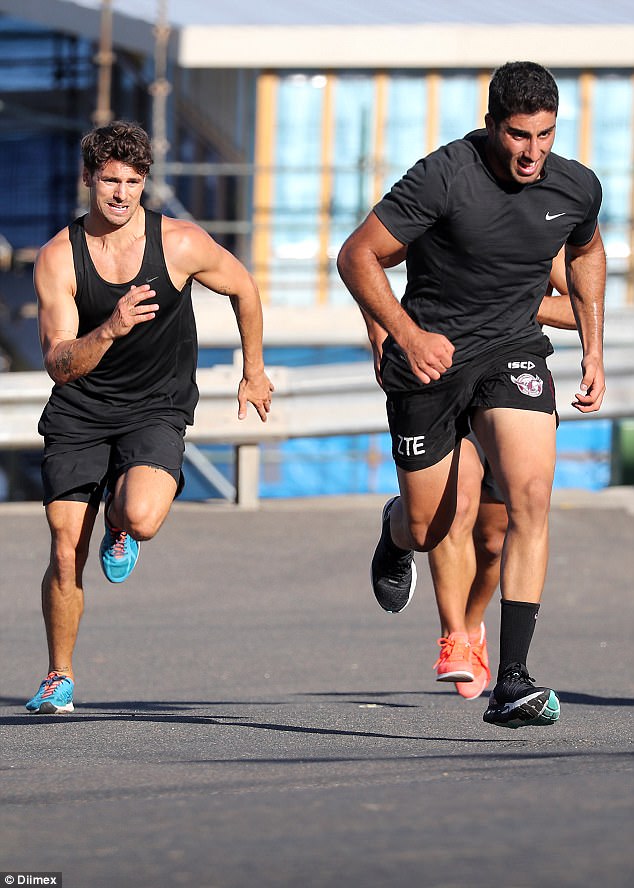 Pushing through! Matty J wore a Nike black singlet, with his bulging biceps and pecs glistening in sweat as he looked exhausted nearing the end of the training session

PT Jono had previously given a sneak peek of the training ahead to his Instagram fans, filming equipment and saying: 'The crew today, got a bit of boxing, bit of training mask, weighted vest and up the stairs.'

Fox Sports and News presenter Matt was pictured wearing the army camouflage weighted vest, before taking it off for the next exercise.

Jono later shared a video of the lads not-so-eagerly waiting to do hill sprints. 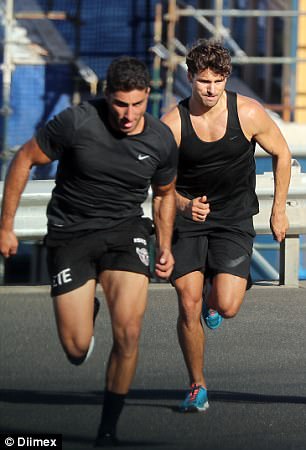 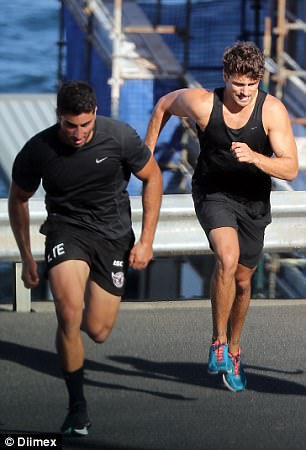 Training! The former Bachelor star will flaunt his fine form in nothing-but-jocks for Adelaide's charity 2.3km run for bowel cancer next week

Matty J announced his involvement with the charity 2.3km run via social media this week.

He shared a video in very short briefs, as he trained on a running track and walked about the city shirtless.

The reality star captioned the upload: 'Radelaide the time has come to strip down to your tighty whities for the @undiesrun. If you fancy seeing me jog semi nude in the street on Jan 14 then sign up now. All funds raised will go towards fighting a much needed cause!' 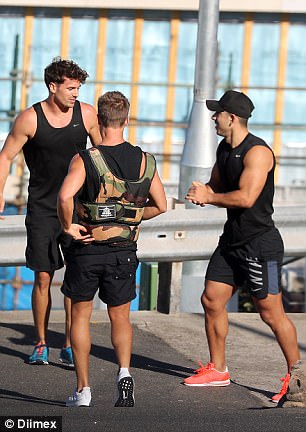 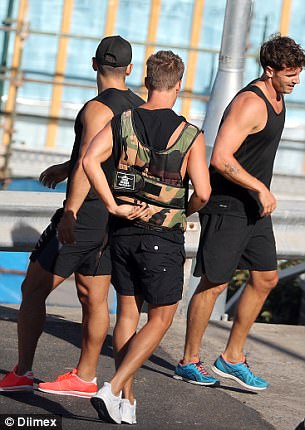 'The crew today, got a bit of boxing, bit of training mask, weighted vest and up the stairs': Fox Sports and News presenter Matt was pictured wearing the army camouflage weighted vest, before taking it off for hill sprints 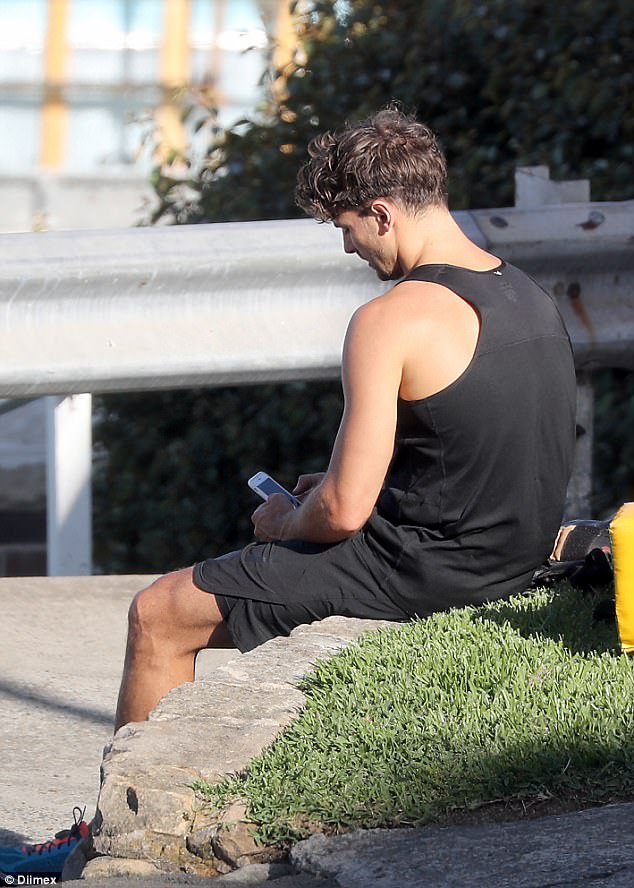 Break time! Matty J was seen taking a quick rest as he checked his phone

Speaking to Daily Mail Australia, the 26-year-old said Matty 'wants to look a bit bigger', citing that he plans to stack on an extra six kilos of muscle. 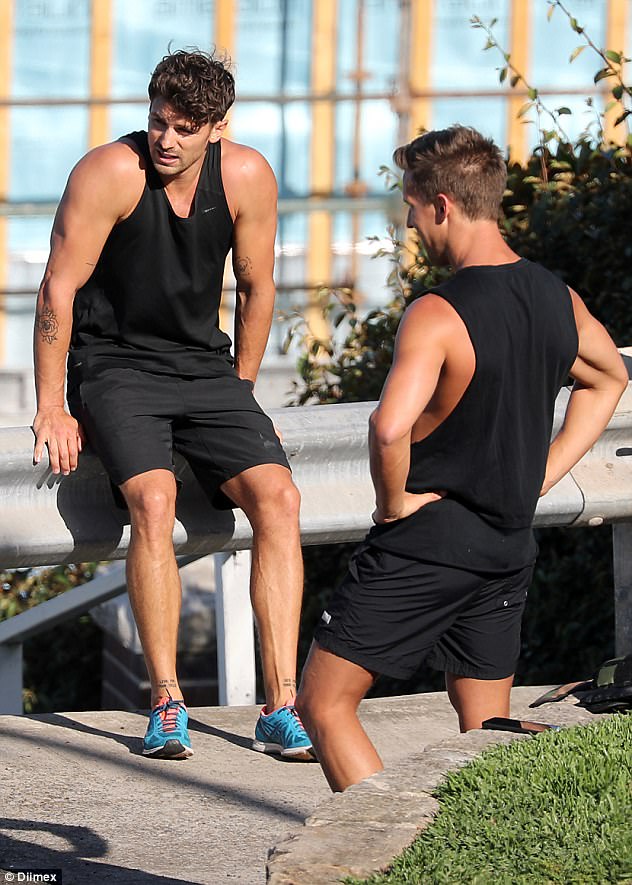