By Michelle Curran For Dailymail.com

Travel chaos continued on Friday evening in the aftermath of the 'bomb cyclone' with passengers at New York's JFK Airport stuck on the runway for up to three hours after landing.

East Coasters were dealing with a deadly dip in temperatures Friday just a day after a winter storm walloped the region with up to 18 inches of snow on Thursday.

Passengers told DailyMail.com that after facing delays from the huge snowstorm which cancelled more than 5,000 flights in and out of the US Thursday, once they finally thought they had reached their destinations they had more setbacks.

Teacher Jessica Holden who was returning to New York on a Thomas Cook flight from Manchester in the UK said: 'The fight was due to land at 1.55pm, it touched down at 4pm but we were sat on tarmac until 6pm.

'I waited for baggage, then at 7.30pmish they said 'Oh sorry, because the plane went into the wrong terminal we can't bring it in'. There was nothing since. It's now 11pm and we've just been told we won't get our baggage tonight. People are getting angry. I just want to go home.' 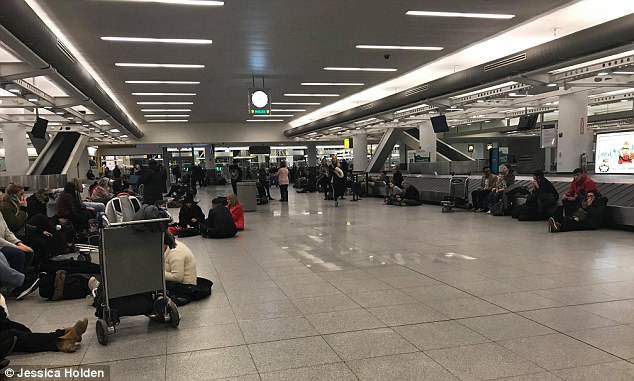 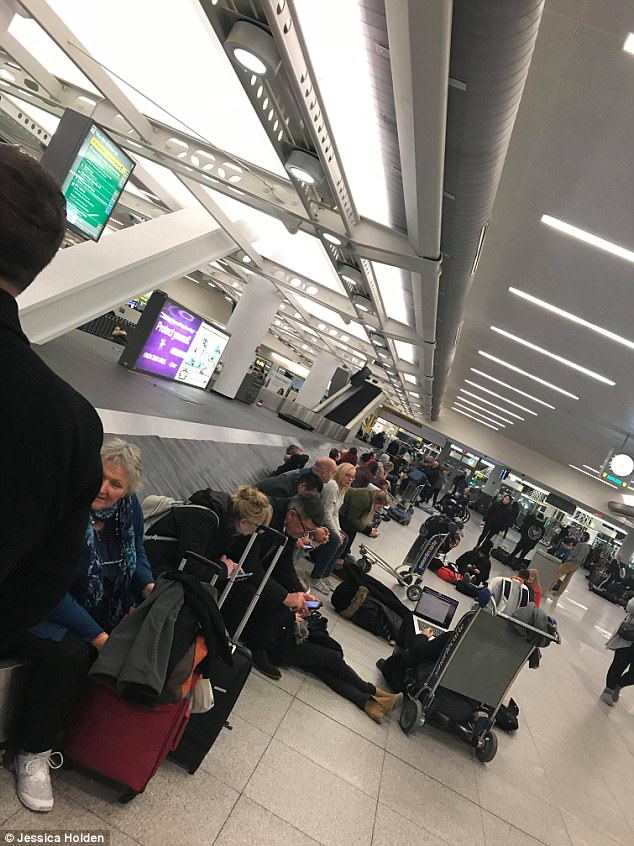 Gemma Bond, who is from the UK and visiting NYC for a vacation, said: 'After my flight being cancelled due to JFK's closure I was very lucky to get on a later flight today which had us land at JFK at 5.50pm local time, you could see the airport and runways had masses of back log and that this wasn't going to be a quick exit.

'After 25 minutes we were informed it could be another 50 minutes it was actually another two hours plus.'

Others took to Twitter. Michael Giurgea tweeted: '@JetBlue Been on Flight 915 for over 2 hours and now we're being told that there are over 50 planes ahead of us!! Does that make any sense? Get us out of here. Another 3 hours is unacceptable #ridiculous #jfk #JetBlue #furious.'

JetBlue responded to his tweet and said: 'I know it's a long frustrating wait. Hang in there! We'll have you on your way as soon as we can.'

Curt Hill tweeted: 'Flying to JFK was easy. Getting to a gate well…. landed 90 min ago and still waiting. #JFK #DeltaAirlines.'

Jessica French wrote on Twitter at 6.53pm Friday: 'I am trapped on @jetblue flight 915 from #JFK to SFO. We have been sitting on the plane since 3.45pm. We were told there are 50 planes ahead of us to take off and there is NO estimated time of departure. We were not given water until 2 hours in… Take us back to the gate!' 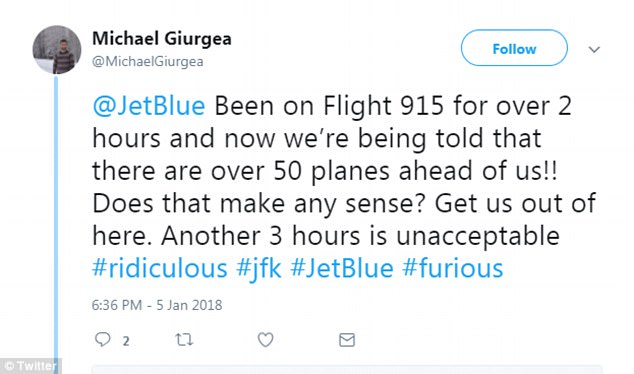 Michael Giurgea was also stuck at JFK and tweeted out above. JetBlue responded to him saying 'hang in there' 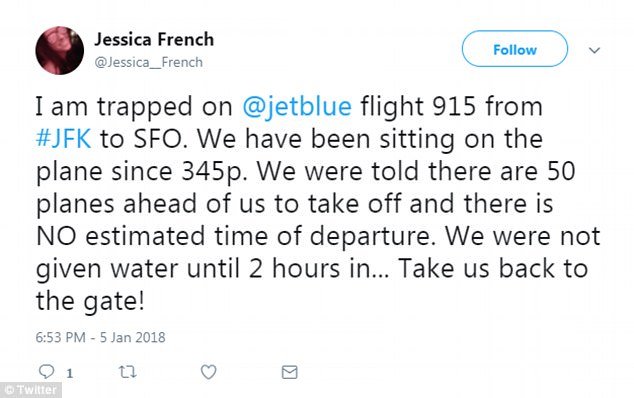 Temperatures reached only a high of 19F in the region Friday – making it even colder than when the storm hit on Thursday.

And it will remain cold throughout the weekend, with highs of 16 degrees expected on Saturday and 21 degrees on Sunday.

It will feel as low as minus 15 degrees from Philly to Beantown on Friday, while residents of states like Maryland and Virginia shiver from temps ranging from 10 degrees to 15 degrees. 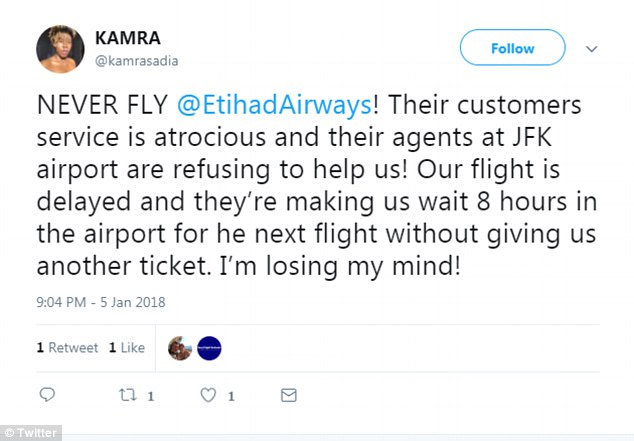 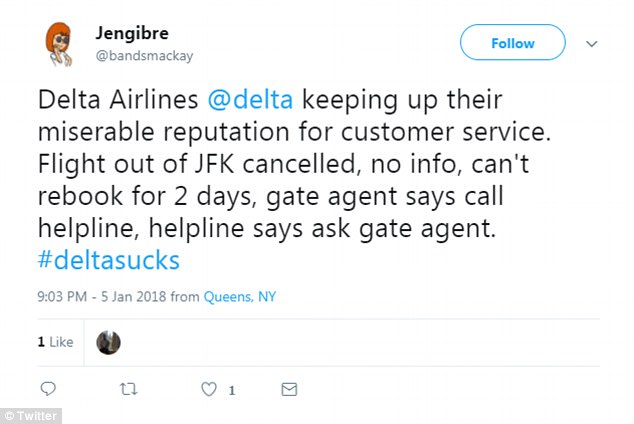 The storm began two days ago in the Gulf of Mexico and first struck the Florida Panhandle. By Thursday it was wreaking havoc as blizzard warnings and states of emergency went into effect along the Eastern Seaboard. Wind gusts hit more than 70 mph in places and some areas saw as much as 18 inches of snow.

The storm caused school and business closings, airline and rail service cancellations or reductions and thousands of utilities outages, many of them restored quickly. Some ferry services even had to be shut down along the Canadian coast.

In the South, the winter weather forced portable toilets to be put in place outside Mississippi's Capitol after pipes burst and it caused iguanas to become sluggish and topple from trees in South Florida. Residents of southeast Georgia were treated to a rare half foot of snow. 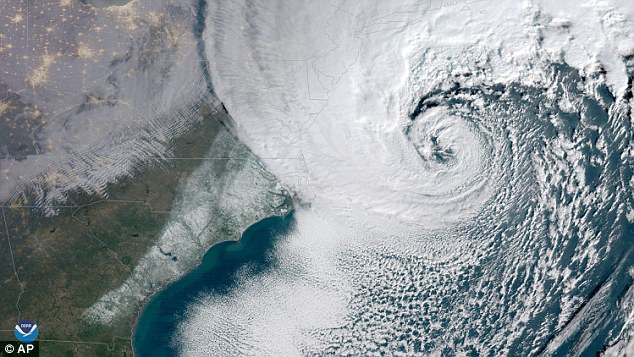 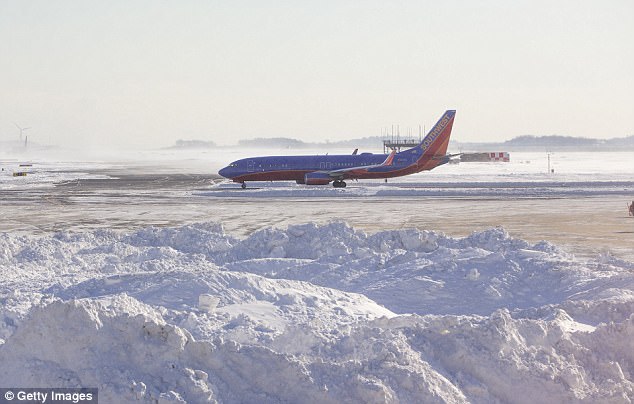 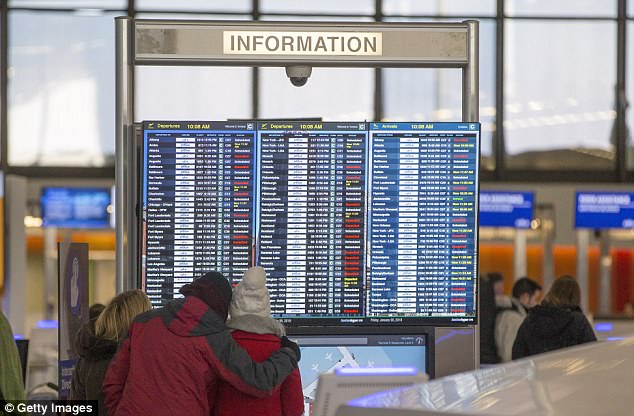