By Forrest Hanson and Michelle Curran For Dailymail.com

A plane being towed at New York's John F Kennedy Airport struck a Kuwait-bound airliner, prompting the flight to be cancelled.

A China Southern plane clipped the right tail end of a Kuwait Airways plane before the latter was due to takeoff for an overnight flight around 12am Saturday morning, the Port Authority said on Twitter.

Both aircrafts, which were Boeing 777s, sustained damage. No one was injured.

Kuwait Airways tweeted in Arabic that their plane was made inoperable due to the crash.

A China Southern plane being towed along the tarmac at JFK airport clipped the right tail end of a Kuwait Airways plane early Saturday morning. Pictured is a scene from the incident's aftermath 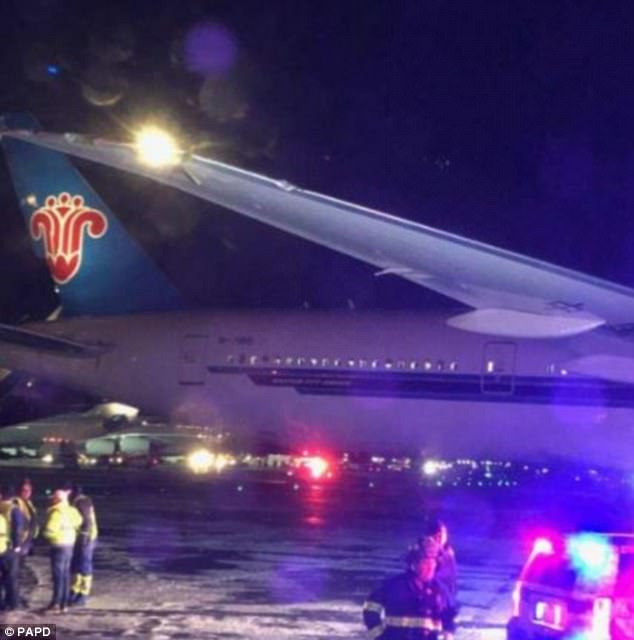 Both planes sustained damage but no passengers on the Kuwait-bound flight were injured. Pictured is the China Southern plane

Passengers on Kuwait Airways flight 118 were taken to hotels and alternative routes for them will be planned, NBC New York reports.

The nightly low reached 9 degrees Fahrenheit (-13 degrees Celsius) the night of the crash.

The crash comes amid travel chaos across the East Coast in the aftermath of the 'bomb cyclone' blizzard which wreaked havoc along the Eastern Seaboard on Wednesday and Thursday.

The airport was shut down following Thursday's blizzard and reopened on Friday morning.

Reports from the New York Daily News say that customers are outraged due to poor communication from airport staff and baggage claim malfunctions causing all off-loading to be done by hand.

The Port Authority told the Daily News that much of the chaos is affecting the International terminal and Terminal 4. 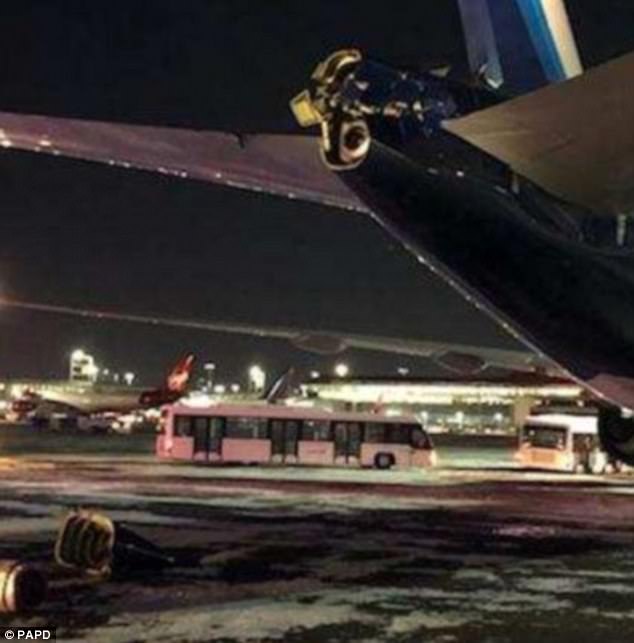 Passengers told DailyMail.com on Friday of their travel nightmares due to the huge snowstorm, which caused more than 5,000 flight cancellations in and out of the US Thursday.

Teacher Jessica Holden, who was returning to New York on a Thomas Cook flight from Manchester, England, said: 'The fight was due to land at 1.55pm, it touched down at 4pm but we were sat on tarmac until 6pm.

'I waited for baggage, then at 7.30pmish they said "Oh sorry, because the plane went into the wrong terminal we can't bring it in."

'There was nothing since. It's now 11pm and we've just been told we won't get our baggage tonight. People are getting angry. I just want to go home.' 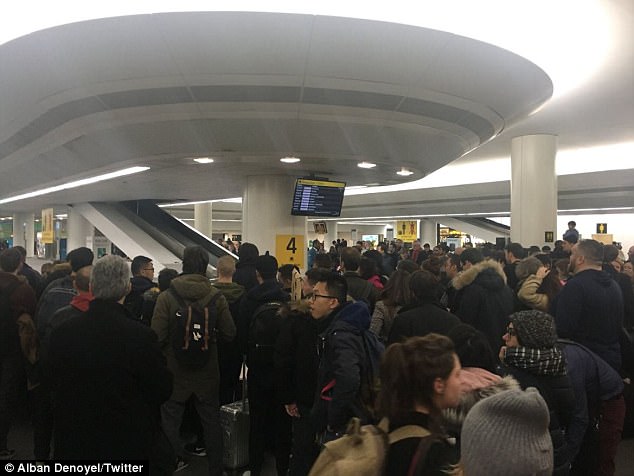 The crash comes amid general travel chaos at JFK airport ever since it closed on Thursday due to the 'bomb cyclone' that hit the East Coast. Pictured is a busy scene at a baggage claim 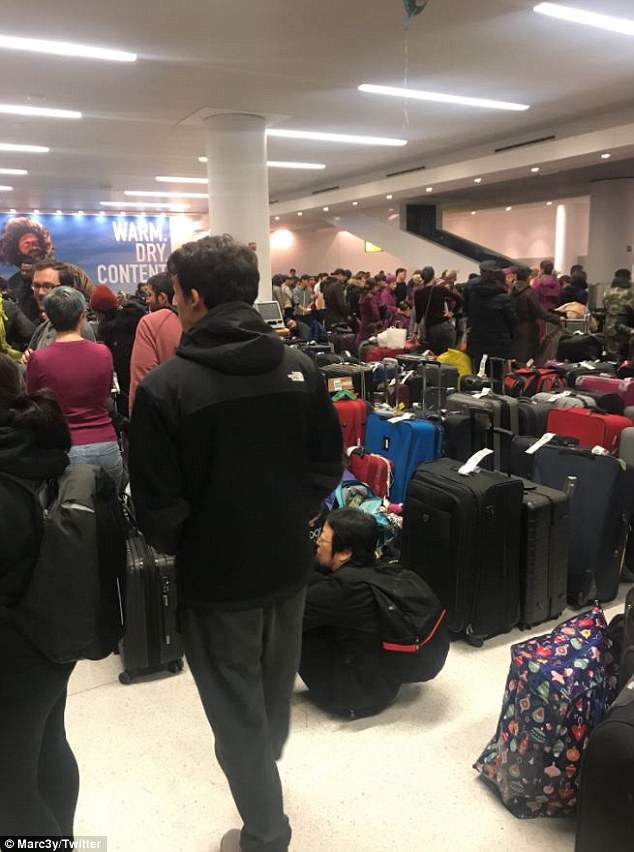 Gemma Bond, who is from the UK and was visiting New York City for a vacation, said: 'After my flight being cancelled due to JFK's closure I was very lucky to get on a later flight today which had us land at JFK at 5.50pm local time, you could see the airport and runways had masses of back log and that this wasn't going to be a quick exit.

'After 25 minutes we were informed it could be another 50 minutes it was actually another two hours plus.'

Also on Friday, an American Airlines flight bound for Cancun from JFK turned around for an emergency landing after someone on board said they saw a wing was on fire.

American Airlines officially said that the plane, a Boeing 738, needed to land due to a 'possible mechanical issue'.

And the Airbus A380 – the world's largest passenger jet – was en route to land at the John F Kennedy International Airport when it was diverted to Stewart Airport in Orange County on Thursday due to winds and whiteout conditions. 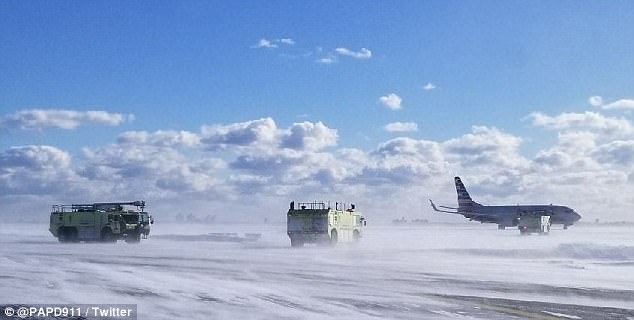 The Port Authority tweeted out a photo of the American Airlines Boeing 738 that safely landed at its point of origin, John F Kennedy International Airport after turning back 20 minutes after takeoff