Doing another TV blitz on Monday, 'Fire and Fury' author Michael Wolff said that Trump wasn't fit for the presidency and called him a 'wing nut.'

Wolff appeared both on Morning Joe and CBS This Morning where the programs' hosts asked about his reporting of the book, as the author has taken some heat for sloppiness.

CBS News' Norah O'Donnell asked Wolff if he had interviewed Vice President Mike Pence of any of Trump's cabinet members for the tome, which chronicled the president's first year in office. 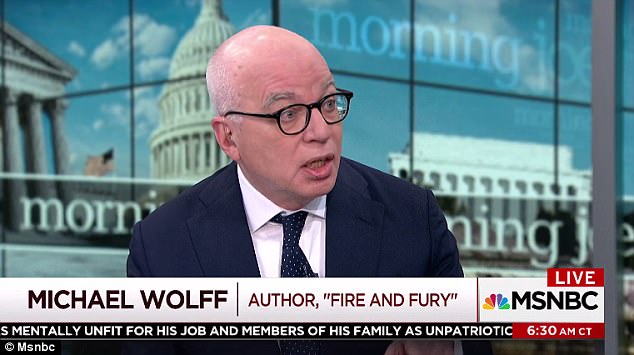 Michael Wolff, the author of the best selling 'Fire and Fury' was on television again Monday morning, this time labeling President Trump a 'wing nut' 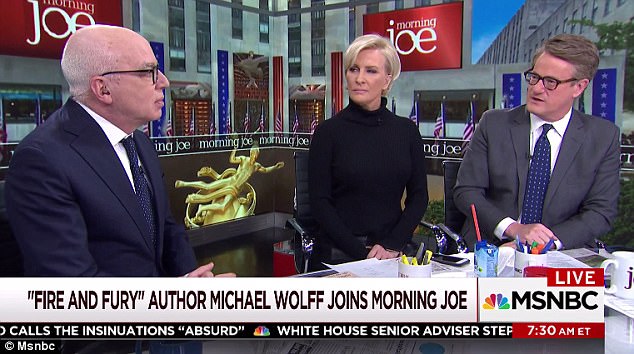 'I did not,' Wolff replied to both questions.

Wolff has said in multiple interviews and in pieces he's written to preview the best-seller that he spent about three hours talking to the president overall, chatting with Trump at various times.

He explained on CBS This Morning that Trump may have not realized their conversations were being used as fodder for the book.

'I think he probably had no idea he was speaking to me for this book,' Wolff said. 'When I would meet the president at the White House we would chat as though we were friends.'

On Morning Joe, the author suggested that the president, while tweeting angrily about the tome, may not even be aware of its full contents.

'This book, Donald Trump is not happy with this book, but he doesn't know most of what's in it, he doesn't know because it hasn't been on television yet … and he doesn't read and nobody has told him because nobody wants to tell him,' Wolff said.

Additionally, Wolff told the Morning Joe hosts that besides Trump himself, Steve Bannon and Kellyanne Conway gave him access to the White House.

Yesterday, Bannon apologized to the president and Donald Trump Jr. for quotes he gave to Wolff for the book, suggesting they were misinterpreted.

Bannon took the most heat for describing the meeting Donald Trump Jr. hosted with Russians at Trump Tower in June 2016 as 'unpatriotic' and 'treasonous.'

'I regret that my delay in responding to the inaccurate reporting regarding Don Jr has diverted attention from the president's historical accomplishments in the first year of his presidency,' the Breitbart head said.

Bannon added that his comments were meant for Paul Manafort, who should have known better.

'My comments were aimed at Paul Manafort, a seasoned campaign professional with experience and knowledge of how the Russians operate,' Bannon explained. 'He should have known they are duplicitous, cunning and not our friends.'

'To reiterate, those comments were not aimed at Don Jr,' Bannon told Axios.

'I don't want to put [Bannon] in more hot water than he is already in, but … it was not directed at Manafort, it was directed directly at Don Jr,' Wolff said of their conversation. 'I think he believes that Don Jr. had no idea what he was doing,' the author added.

Wolff also believed Donald Trump Jr set up the meeting 'not even so much as to get dirt on Hillary Clinton.'

'But it was because, in the context of the campaign, they wanted to get rid of Corey Lewandowski and he had to do something to show his father he had the stuff,' Wolff said, referencing the president's original campaign manager, who was let go in late June of that year.

Wolff's answer was a definitive 'no.'

'Every time you speak to him you think, this is a wing nut,' Wolff said. 'There is something really alarming in ways that you cannot even begin to describe, it's like you're riveted to your seat.'