By Imogen Blake For Mailonline

When we're busy, anything that can save time and make our lives easier is a godsend.

It's why people have come up with some very clever food hacks that can make mundane tasks that little bit easier.

Their tricks, including the best way to make a sandwich so the meat covers all of the bread, have now been shared online so that everyone can copy and enjoy them.

From using a clothes hanger as a cheap cookbook holder to cutting cakes and cheese with unscented dental floss, these tips could change the way you use everyday household objects forever. 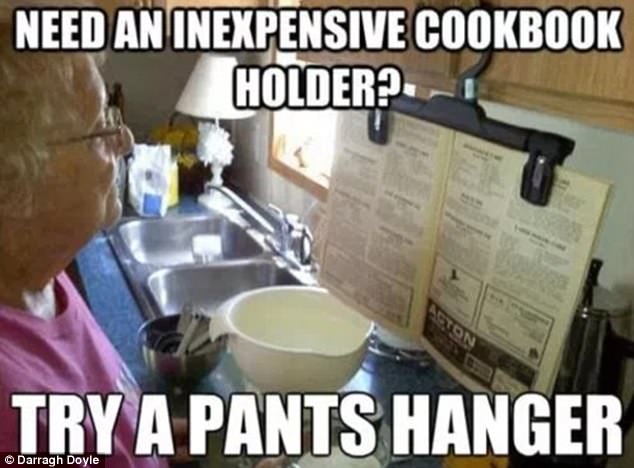 It's certainly not the prettiest way of holding up cookbooks as you whip up a meal but if you don't have a cookbook holder, a clothes hanger with grips will do the trick just as well. You can hang it from the handle of a kitchen cupboard 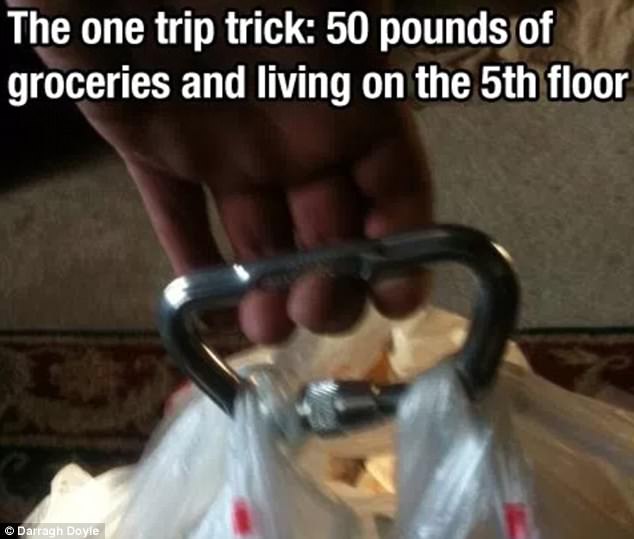 If you live alone, it's difficult to do a big shop as you can only carry so many bags at once. However using a karabiner to hold bags will help you to carry many items in one trip

The tips were first shared on a now-viral blog post by Darragh Doyle which is regularly shared on Pinterest.

He compiled a list of the best life hacks he could find on the web, which include a handful of very handy tricks for the kitchen.

They include tips for ingenious solutions to common problems, such as how to ensure your iced coffee doesn't water down when you add ice, and how to keep a straw in place when drinking from a can.

Others suggest clever ways of using ordinary objects in a new way, such as a karabiner to hold several grocery bags at once, and the best method of microwaving leftovers.

People have worked out that you can use unscented dental floss – or thin string – to cut cakes, cheese and other soft foods into neat slices, which works better than a knife if you have an unsteady hand (left). Meanwhile, you can keep bread fresh by cutting off the top of a plastic bottle, looping the plastic wrapping through it, folding it over the cap and then screwing the lid on top over it to seal it (right) 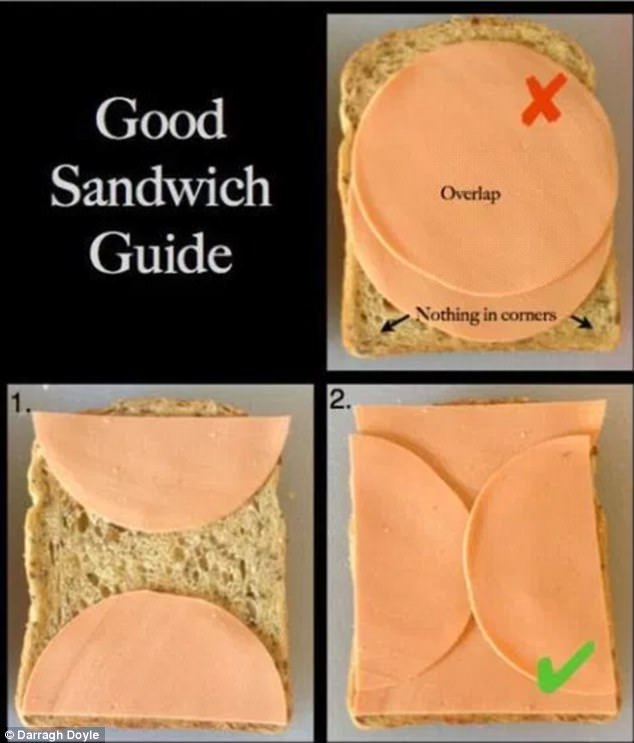 This hack could change your life! If you cut circular slices of sandwich meat in half, you can layer them as above so that all the bread is covered 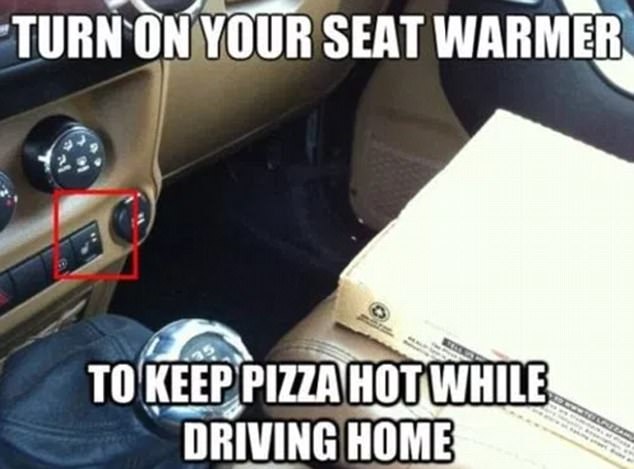 If you're picking up a takeaway, use the seat warmer in your car if you have one to keep it hot on the journey home 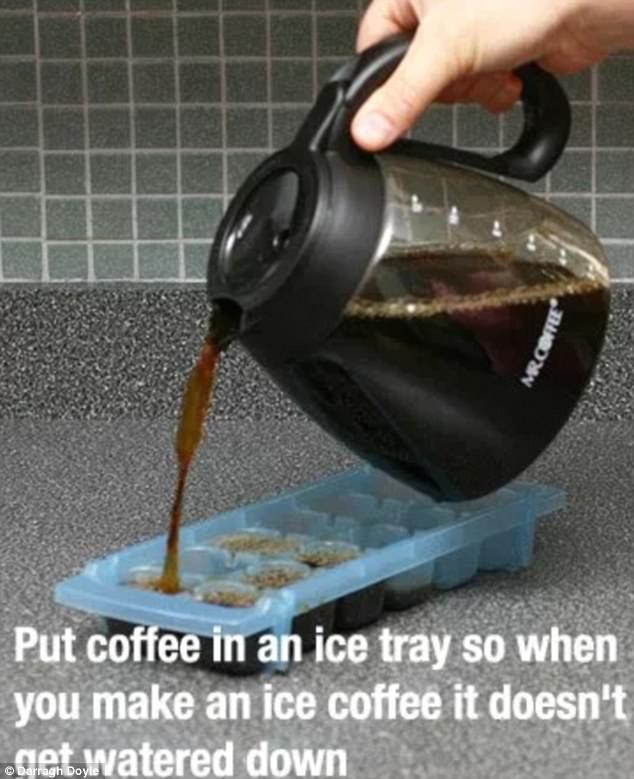 Iced coffee needs ice, but when it melts, the drink will be watered down. To avoid this, try pouring coffee into ice trays and freezing so that you can add them to your homemade iced coffees, which then won't water down 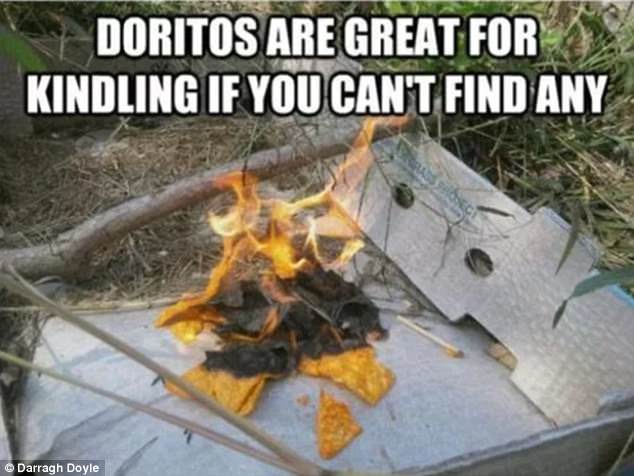 Who knew Doritos were so flammable? If you need to start a fire and don't have any firelighters or kindling, try using a few crisps instead 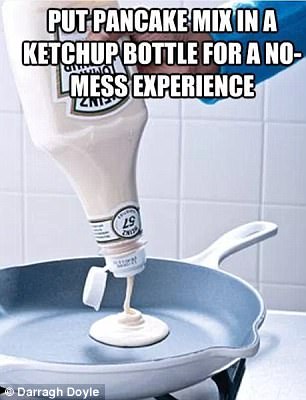 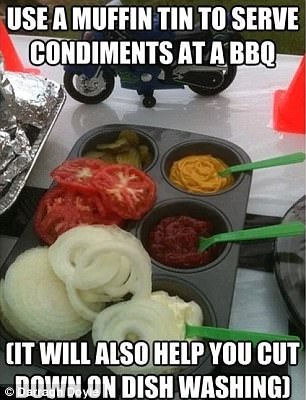 Making pancakes can be messy if you ladle them from a mixing bowl. To avoid spillages, try putting the mix in an empty ketchup bottle or other utensil so you can squeeze it straight into a pan (left). Another useful hack from the blog is serving up condiments in a muffin tray at a barbecue to save on washing up lots of ramekins and bowls (right) 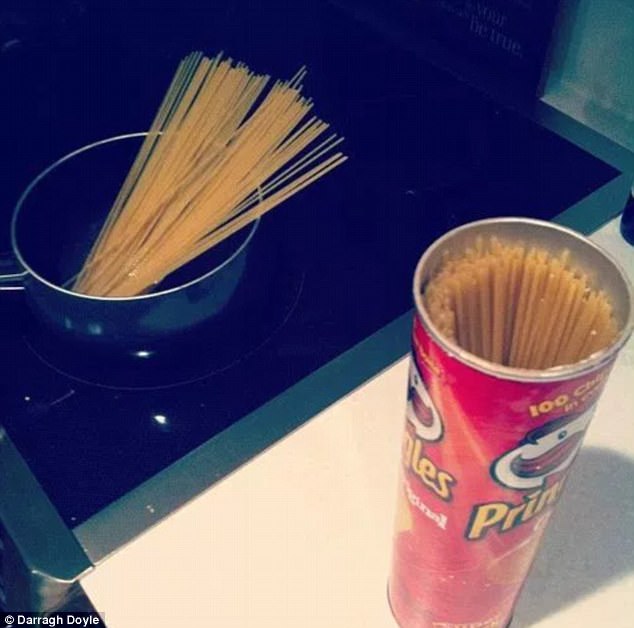 No need to throw away empty Pringles cans! They can become handy cupboard organisers and a make a great holder for dry spaghetti 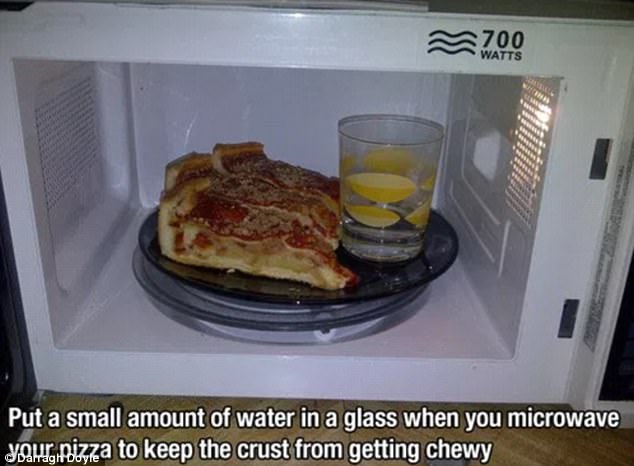 The glass of water can be used to absorb excess microwave radiation when heating a dry piece of pizza, which means the crust will stay crusty instead of going soggy. If the water wasn't there, the microwave would evaporate the moisture from the pizza, which would then permeate the bread, making it go floppy