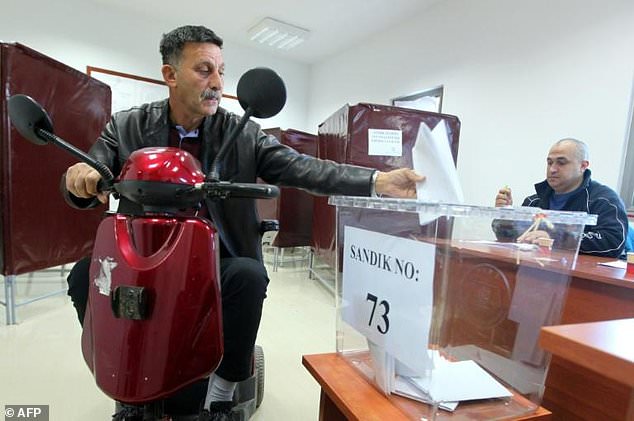 A Turkish Cypriot man casts his ballot in the parliamentary election in the northern part of Nicosia in the self-proclaimed Turkish Republic of Northern Cyprus (TRNC), recognized only by Turkey, on January 7, 2018

Northern Cyprus, a statelet recognised only by Turkey, was Monday set to be ruled by a right-wing coalition sceptical of reunifying the island after the prime minister's party won elections without gaining an overall majority.

The Turkish Republic of Northern Cyprus (TRNC), established in the wake of Turkey's 1974 invasion of the island in response to an Athens-backed coup, voted Sunday in snap legislative polls forced by tensions in the previous coalition.

The vote came ahead of presidential polls later this month in the internationally recognised Greek-majority Republic of Cyprus, with peace efforts on hold until both sets of elections are over.

The conservative National Unity Party (UBP) of prime minister Huseyin Ozgurgun came out on top with 36 percent of the vote and 21 seats, short of the 26 seats needed for a majority in the 50-member house, according to provisional results.

Its most likely coalition bedfellows appear to be the nationalist Democratic Party (DP) of Serdar Denktas — the son of the former hardline leader Rauf Denktas and — the Rebirth Party (YDP) which is made up of Turkish mainland settlers.

They picked up just three and two seats respectively but just enough to create a right-wing coalition if the provisional results released by the election commission are confirmed.

"The UBP has emerged as the biggest party by a wide margin," said Ozgurgun in a victory speech early Monday. "We are preparing for new days with the power the people have given to the UBP."

Neither of the three right-wing parties — including the UBP — favour a negotiated settlement with the Greek Cypriots to create a single bizonal federal state.

They want a continuation of the status quo, with two "states" on the Mediterranean island.

The People's Party (HP) — a new party that has expressed scepticism over negotiations to reunify the island — polled well on 17 percent and was on course to win nine seats.

President Mustafa Akinci, who came to power in April 2015 vowing to find a lasting peace, is however a strong supporter of a federal solution and reconciliation with the Greek Cypriots.

The results may complicate his life as he seeks broad backing at home for a federal solution to the Cyprus problem and convince his Greek Cypriot counterparts he means business.

However, the president has full responsibility for the talks with the Greek Cypriots and any solution that is agreed will be submitted to a referendum.

The election in the northern third of Cyprus comes six months after efforts to reunify the island collapsed at a United Nations-hosted peace summit in Switzerland over several sticking points including the withdrawal of Turkey's 45,000 troops.

On January 28, the Republic of Cyprus is set to hold a presidential election in which conservative incumbent Nicos Anastasiades is the frontrunner.

Anastasiades has campaigned on a pro-peace ticket, vowing to attempt to revive talks with Akinci, despite the souring of their relationship after two years of tough and ultimately fruitless negotiations.

Georgia Toffolo has been targeted by trolls over her skin