After months spent in hibernation due to the coronavirus pandemic, live sport will make its return to Singapore next Friday with One Championship's Reign of Dynasties closed-door event.

The mixed martial arts (MMA) promotion last featured at the Singapore Indoor Stadium on Feb 28, but without any fans in attendance.

The Covid-19 crisis had forced One to switch from live events – which attract between 5,000 and 10,000 spectators here and up to 18,000 in other South-east Asian nations – and produce closed-door shows and broadcast them globally.

Next week's event is headlined by Thai Sam-A Gaiyanghadao, who will defend his strawweight Muay Thai world championship against Australian Josh Tonna.

There will be five other bouts, including a lightweight clash (up to 77.1kg) between Singaporean Amir Khan and Rahul Raju, 29, a permanent resident originally from India.

"I missed everything that came with a fight – the preparation, interviews, all the excitement, nervousness… so the thrill is back."

The Evolve Fight Team fighter feels blessed for the chance to be a part of a "good sign that soon things will be back to normal".

The Singapore Premier League football competition has targeted a resumption next Saturday, with all its players and match officials to be swab tested by this weekend.

As for One, it is understood athletes and officials on their card will be quarantined at a hotel from Monday. While most of the foreign fighters such as Sam-A, Dejdamrong Sor Amnuaysirichoke, Eko Saputra and Aleksi Toivonen involved in Friday's event are from the Evolve stable and based in Singapore, there are several others from Australia and China.

One had planned for four closed-door shows in Singapore in April and May, but April's circuit breaker measures scuppered those plans.

GLAD IT'S ALL RETURNING

When you go without (a match) for a while, they say you get 'fight itch' – I had that. I missed everything that came with a fight, the preparation, interviews, all the excitement, nervousness… so the thrill is back.

AMIR KHAN, Singapore MMA fighter, on not having fought since February.

Fights were eventually staged in Bangkok on July 31 and Aug 28, but they featured only Thailand-based athletes.

Both Amir and Raju, who trains with Juggernaut Fight Club and arrived in Singapore in 2010 as a student at Temasek Polytechnic, said they had used the long run-up to their fight to sharpen their skills and fine tune their game plans.

Amir did shadow boxing, sprints, and even striking drills with pads taped to a pillar at the multi-storey carpark near his home.

He said he is a "much moreRead More – Source

Football: PSG look to go one better in Champions League but doubts remain

More help on the way to protect livelihoods: Tong 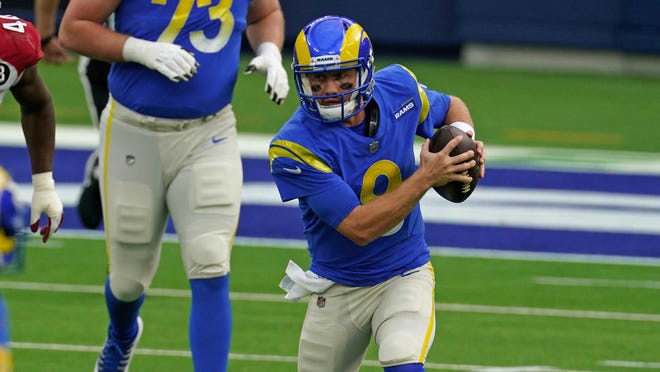 In fitting fashion, an NFC East elimination game concluded with a running back sitting on his fumbled ball. Yes, sitting.

New York Giants running back Wayne Gallman coughed up the ball with 58 seconds to play, but officials ruled he secured it just enough to maintain possession after he literally sat on it. The Giants held on for the final minute of the game, winning 23-19 Sunday at MetLife Stadium.

The Dallas Cowboys have been eliminated from playoff contention.

The NFC East title will be decided by a “Sunday Night Football” matchup between the Washington Football Team and Philadelphia Eagles. Washington is in if it ties or wins. The Giants (6-10) will advance if Washington loses.

Neither the Giants nor the Cowboys played a clean game. Dallas’ offense stalle

The Giants, despite an interception and two fumbles (one lost), terrorized the Cowboys offensive line and sacked Dalton six times — hitting him a total of nine times. Dalton’s pressure prohibited the Cowboys from jelling in the passing game as they had a week earlier in their 37-17 win over the Eagles.

d repeatedly, and its defense let up two early touchdowns.

But head coach Mike McCarthy will shoulder the blame for two questionable decisions.

On third-and-16, with 7:02 to play and the Giants up by 1, Giants receiver Dante Pettis did not appear to secure the catch on a 10-yard pass from quarterback Daniel Jones. Dallas chose not to challenge the play that immediately preceded the Giants’ 50-yard field goal. That, and the decision not to go for 2 after running back Ezekiel Elliott’s third-quarter touchdown, doomed the Cowboys.

Neither team converted a third down for the first 24 minutes of the game, and ball security made a difference. The Cowboys’ final drive ended on quarterback Andy Dalton’s interception in the end zone.

The Giants, despite an interception and two fumbles (one lost), terrorized the Cowboys offensive line and sacked Dalton six times — hitting him a total of nine times. Dalton’s pressure prohibited the Cowboys from jelling in the passing game as they had a week earlier in their 37-17 win over the Eagles.

NFC East eyes will turn to the Sunday night game to determine whether a six- or seven-win team advances to the playoffs.

McCarthy’s eyes will turn to his second season in Dallas after an underwhelming first. 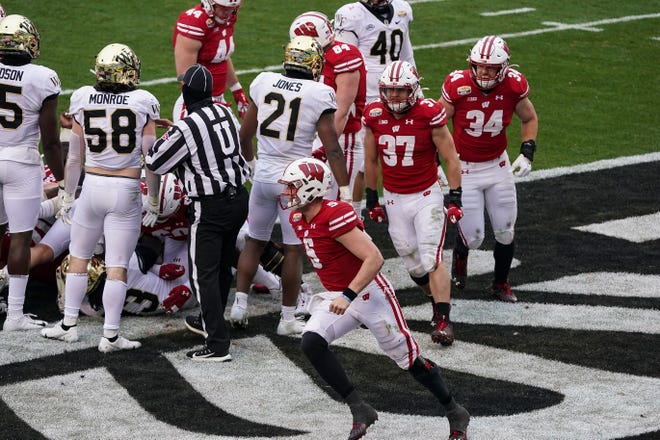 The Wisconsin Badgers captured the Duke’s Mayo Bowl and the trophy that came along with it.

And then they broke it.

While dancing around to celebrate his team’s 42-28 victory over Wake Forest on Wednesday, quarterback Graham Mertz dropped the football-shaped piece of Lenox crystal, leaving it shattered on the floor of the locker room after it fell off its base.

“We just wanted everybody to have a piece of that trophy,” Wisconsin coach Paul Chryst joked.

That would seem appropriate.

Mertz accounted for three touchdowns and Wisconsin turned four second-half interceptions, all by different players, into 21 points to turn a close game into a near-rout of the Demon Deacons. Five players scored touchdowns for the Badgers.

Mertz, a redshirt freshman, threw for 130 yards and ran for two short TDs as Wisconsin (4-3) finished a rocky 2020 season on a high note.

“Yeah, I dropped it,” Mertz said sheepishly. “That’s on me. It happened.”

With the game tied at 21 late in the third quarter, Noah Burks intercepted Wake Forest’s Sam Hartman on a pass in the flat when the intended receiver failed to turn his head around. Burks returned the ball 41 yards to set up a 14-yard scoring strike from Mertz to Mason Stokke on a wheel route, giving the Badgers their first lead.

Hartman, who had thrown only one interception all season, was picked off on the next three possessions as well.

Scott Nelson had a 60-yard interception return and Collin Wilder returned a pick 72 yards to set up short TD runs that gave the Badgers a 42-21 lead, resulting in Hartman getting benched. Jack Sanborn had 11 tackles and an interception and was named MVP of the game.

“It felt like one led to the other,” Sanborn said. “After three picks, we said, ‘Collin you have to get one’ – and then Collin went and got one.”

Sanborn said the Badgers picked up on some of Hartman’s tendencies.

Hartman finished 20 of 37 passing for 318 yards with three touchdowns and four interceptions.

“All of a sudden the dam opened the floodgates and wow, I never thought we would lose a game like that,” Wake Forest coach Dave Clawson said.

Clawson said he felt Hartman was telegraphing his passes.

“I think he held on to targets too long and Wisconsin broke on his eyes and his arm actions,” Clawson said.

Wake Forest (4-5) outgained Wisconsin 518-266 on offense, but the Badgers had 176 return yards off interceptions.

Hartman threw three touchdown passes to Jacquarii Roberson to give the Demon Deacons a 21-14 lead early in the third quarter against the nation’s No. 1-ranked defense.

The game was played in front of no fans other than family and friends due to the coronavirus pandemic. 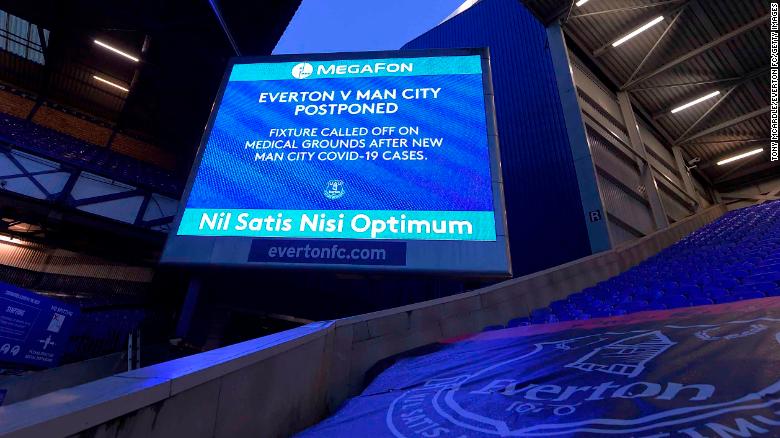 An uptick in positive Covid-19 cases at Manchester City has forced the postponement of the club’s English Premier League game at Everton on Monday.

“After the latest round of Covid-19 testing, the club returned a number of positive cases, in addition to the four already reported on Christmas Day,” said City in a statement on their website.
“With the security of the bubble compromised, there posed a risk that the virus could spread further amongst the squad, the staff and potentially beyond.
“Based on strong medical advice the Premier League, in consultation with both clubs, have decided to postpone the fixture.”
On Christmas Day, City confirmed that forward Gabriel Jesus and defender Kyle Walker, as well as two members of staff had tested positive for Covid-19.
Monday’s game had been slated to kickoff at 8 p.m. local time at Goodison Park in Liverpool.
An alternative date and kickoff time has yet to be decided, according to Everton.
The Premier League says further testing will be conducted on Tuesday.
Meanwhile Crystal Palace and Leicester City shared a 1-1 draw on Monday as the Premier League’s intense festive schedule of matches continued.
Kelechi Iheanacho missed a first-half penalty for the visitors as second place Leicester, who had drawn 2-2 with Manchester United on Saturday, looked to close the gap on Premier League leader Liverpool.
Wilfried Zaha’s superb finish then gave Palace the lead, before Harvey Barnes’ low shot late on secured Leicester a point, moving Brendan Rodgers’ side on to 29 points, three behind the Premier League defending champion.
Read from source: https://edition.cnn.com/2020/12/28/football/manchester-city-everton-english-premier-league-spt-intl/index.html
Continue Reading