By James Dutton For Mailonline

Tottenham returned to winning ways with a thumping win over Stoke at Wembley on Saturday as Harry Kane struck a second-half brace.

Elsewhere there were wins for Burnley over Watford and Huddersfield over Brighton.

Swansea claimed a vital victory over West Brom thanks to Wilfried Bony's late strike, while Christian Benteke missed a stoppage-time penalty in Crystal Palace's 2-2 draw with Bournemouth at Selhurst Park.

For users viewing this on the app, click here for live blog access on the mobile site. 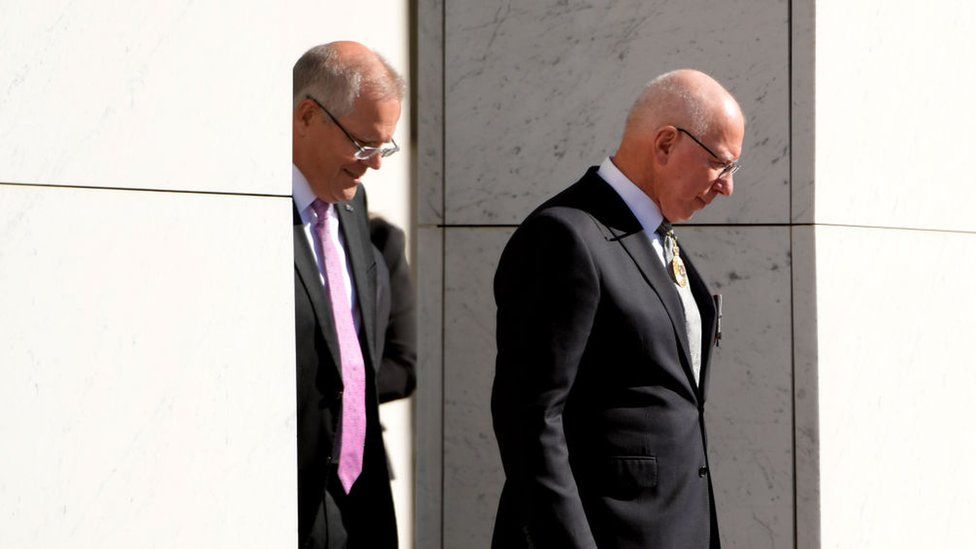 In the past fortnight, Australia has been gripped by revelations that former Australian Prime Minister Scott Morrison secretly appointed himself to several additional ministries.

The move has been labelled a “power grab” by his successor as prime minister, and Mr Morrison has been scolded by many – even his own colleagues.

But the scandal has also dragged Australia’s governor-general into the fray – sparking one of the biggest controversies involving the Queen’s representative in Australia in 50 years.

So does Governor-General David Hurley have questions to answer, or is he just collateral damage?

Governors-general have fulfilled the practical duties as Australia’s head of state since the country’s 1901 federation.

Candidates for the role were initially chosen by the monarch but are now recommended by the Australian government.

The job is largely ceremonial – a governor-general in almost every circumstance must act on the advice of the government of the day. But conventions allow them the right to “encourage” and “warn” politicians.

Key duties include signing bills into law, issuing writs for elections, and swearing in ministers.

Mr Hurley has run into trouble on the latter. At Mr Morrison’s request, he swore the prime minister in as joint minister for health in March 2020, in case the existing minister became incapacitated by Covid.

Over the next 14 months, he also signed off Mr Morrison as an additional minister in the finance, treasury, home affairs and resources portfolios.

It’s a request the governor-general “would not have any kind of power to override or reject”, constitutional law professor Anne Twomey tells the BBC.

“This wasn’t even a meeting between the prime minister and the governor-general, it was just paperwork.”

But Mr Morrison’s appointments were not publicly announced, disclosed to the parliament, or even communicated to most of the ministers he was job-sharing with.

But the governor-general had done the right thing, the solicitor-general said in his advice this week.

It would have been “a clear breach” for him to refuse the prime minister, regardless of whether he knew the appointments would be kept secret, Stephen Donaghue said.

Ultimately, Mr Hurley had to sign off on Mr Morrison’s requests, but critics say he could have counselled him against it and he could have publicised it himself.

But representatives for the governor-general say these types of appointments – giving ministers the right to administer other departments – are not unusual.

And it falls to the government of the day to decide if they should be announced to the public. They often opt not to.

“The last of these bizarre, duplicated ministry appointments… were made more than a year after the first, so clearly by then the governor-general did know that they weren’t being made public,” she says.

“I don’t agree for a moment that the governor-general has a lot of things on his plate and might not have noticed.”

The historian says it’s one of the biggest controversies surrounding a governor-general since John Kerr caused a constitutional crisis by sacking Prime Minister Gough Whitlam in 1975.

Prof Hocking famously fought for transparency around that matter – waging a lengthy and costly legal battle that culminated in the release of Mr Kerr’s correspondence with the Queen.

And she says the same transparency is needed here.

The Australian public need to know whether Mr Hurley counselled the prime minister against the moves, and why he didn’t disclose them

The government has already announced an inquiry into Mr Morrison’s actions, but she wants it to look at the governor-general and his office too.

“If the inquiry is to find out what happened in order to fix what happened, it would be extremely problematic to leave out a key part of that equation.”

“Something has gone seriously wrong at Government House,” he told the Australian Broadcasting Corporation.

“It is the passive compliance along the chain… that did undermine our constitution and our democracy… that troubles me the most. This is how tyranny gets under way.”

Prof Twomey says the criticism of Mr Hurley is unfair – there’s was no “conspiracy” on his part to keep things secret.

“I don’t think it’s reasonable for anyone to expect that he could have guessed that the prime minister was keeping things secret from his own ministers, for example.

“Nobody really thought that was a possibility until about two weeks ago.”

Even if he had taken the unprecedented step to publicise the appointments or to reject Mr Morrison’s request, he’d have been criticised, she says.

“There’d be even more people saying ‘how outrageous!'” she says. “The role of governor-general is awkward because people are going to attack you either way.”

“I have no intention of undertaking any criticism of [him].”

A role fit for purpose?

Prof Hocking says it’s a timely moment to look at the role of the governor-general more broadly.

She points out it’s possible the Queen may have been informed about Mr Morrison’s extra ministries when Australia’s parliament and people were not.

“It does raise questions about whether this is fit for purpose, as we have for decades been a fully independent nation, but we still have… ‘the relics of colonialism’ alive and well.”

Momentum for a fresh referendum on an Australian republic has been growing and advocates have seized on the controversy.

“The idea that the Queen and her representative can be relied upon to uphold our system of government has been debunked once and for all,” the Australian Republic Movement’s Sandy Biar says.

“It’s time we had an Australian head of state, chosen by Australians and accountable to them to safeguard and uphold Australia’s constitution.”

But Prof Twomey says republicans are “clutching at straws” – under their proposals, the head of state would also have been bound to follow the prime minister’s advice.

“It wouldn’t result in any changes that would have made one iota of difference.”

A car carrying the Australian prime minister’s security team has crashed in Tasmania during an election campaign visit.

Four police officers were taken to hospital with “non-life threatening injuries” after the car and another vehicle collided, authorities said.

Prime Minister Scott Morrison was not in the car, but the accident prompted him to cancel the rest of his campaign events on Thursday.

The other driver involved was not hurt.

Tasmania Police said initial investigations suggested the second car had “collided with the rear of the police vehicle, while attempting to merge”. It caused the unmarked security vehicle to roll off the road.

“Family members of the officers have been contacted and are being kept informed of their condition,” a statement said.

“The PM is always extremely grateful for the protection provided by his security team and extends his best wishes for their recovery and to their families.”

Australians go to the polls on 21 May. Mr Morrison – prime minister since 2018 – is hoping to win his conservative coalition’s fourth term in office.

Polls suggest the opposition Labor Party, led by Anthony Albanese, is favoured to win. However, Mr Morrison defied similar polling to claim victory at the last election in 2019.

Political observers say the cost of living, climate change, trust in political leaders, and national security will be among key issues in the campaign.

In recent weeks, the prime minister has faced accusations of being a bully and once sabotaging a rival’s career by suggesting the man’s Lebanese heritage made him less electable. Mr Morrison has denied the allegations.

Mr Albanese stumbled into his own controversy this week when he failed to recall the nation’s unemployment or interest rates.

Long queues at Sydney airport’s domestic terminals have continued for a third day, with some passengers missing international connections, as the airport warns delays resulting from a surge in travellers and a shortfall in security staff could continue for weeks.

Chaotic scenes were reported in the departure halls as early as 4.30am on Saturday, with some frustrated travellers, many of whom heeded the pleas of airport chiefs to arrive at least two hours before their domestic flight was due to take off, claiming only one security line was operating.

While the queues that formed early on Saturday are understood to have cleared later in the morning, the airport apologised to affected travellers.

“Traffic numbers are picking up and the close contact rules are making it hard to fill shifts and staff the airport. We appreciate your patience,” Sydney airport said on its Twitter account.

A wave of families travelling as the term two school holidays begin this weekend, combined with close contact rules that are understood to be taking out about 20% of security shifts in any given day, are driving the problem.

Certis, the company that Sydney airport contracts for its security operations, is desperately trying to recruit personnel, while the airport has reallocated back office, IT and retail workers to the departure hall to comb queues so they can prioritise passengers at risk of missing their flight.

“We are working around the clock to resolve these issues and have teams in the terminals bringing passengers forward in order of priority,” a Sydney airport spokesperson said.

He added that the airport is “anticipating it will [be] busy right through the school holiday period and peak over the Easter and Anzac Day weekends, in some cases at 90% of pre-Covid passenger levels”.

“We’re deeply grateful to passengers for their ongoing patience and we’re sorry to everyone who has been inconvenienced,” the spokesperson said. “We would also like to thank passengers for getting to the airport early and treating staff and each other with kindness and respect.”

The Qantas chief executive Alan Joyce was forced to clarify comments he made on Friday that passengers were “not match fit” and that those forgetting to remove laptops and aerosols from their bags at the security check contributing to the delays.

“Just to be clear, I’m not ‘blaming’ passengers,” Joyce said. “Of course it’s not their fault,” he said.

Qantas shed thousands of staff during the pandemic, and outsourced ground crews in a decision that was challenged in court.

On Saturday, Qantas also apologised to a Melbourne family left stranded in Sydney, after domestic flight delays caused them to miss an international trip.

Javiera Martinez, her partner Daniel Capurro and their three children were supposed to be flying to Chile on Friday to visit relatives they had not seen in three years.

But after their 8am Qantas flight from Melbourne was delayed by half an hour, baggage handling and airport transfer delays in Sydney meant they couldn’t make their 11.30am LATAM Airlines flight to Santiago.

Martinez said the airline’s procedures at the airport were chaotic.

“We think Qantas didn’t behave appropriately. I got berated by the person at the counter – they never apologised, they never assumed any responsibility at all,” she said. “It was a rude conversation. We have been mistreated badly I would say.”

The PCR tests they need to travel have now expired and they will have to take them again as they wait for seats on the next flight to Santiago from Sunday.

The airline has apologised and paid for a night’s accommodation in Sydney.

“We sincerely apologise that the family missed their connecting flight on another airline due to delays moving through Sydney airport on Friday,” a Qantas spokesperson said.

The family is among many affected by hold ups amid the busiest travel period in two years, with Sydney, Melbourne and Brisbane airports warning passengers to arrive two hours before domestic flights.