Downing Street defended Mr Grayling's decision to fly out of Britain as workers returned to work after the Christmas holidays today.

Neither Mr Grayling nor any of his deputies appeared in public today to defend the controversial 3.4 per cent average fare increase that has hiked season tickets by up to £2,500. 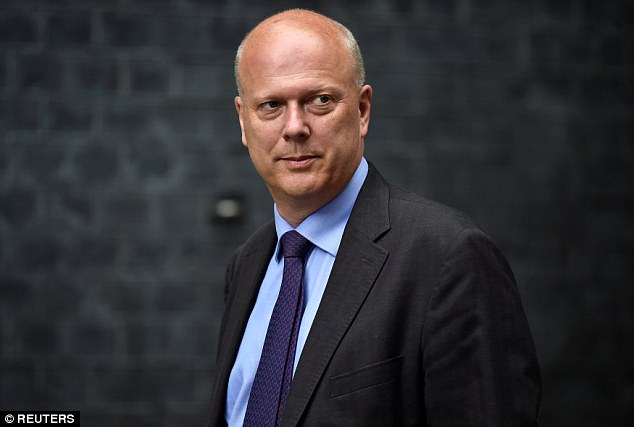 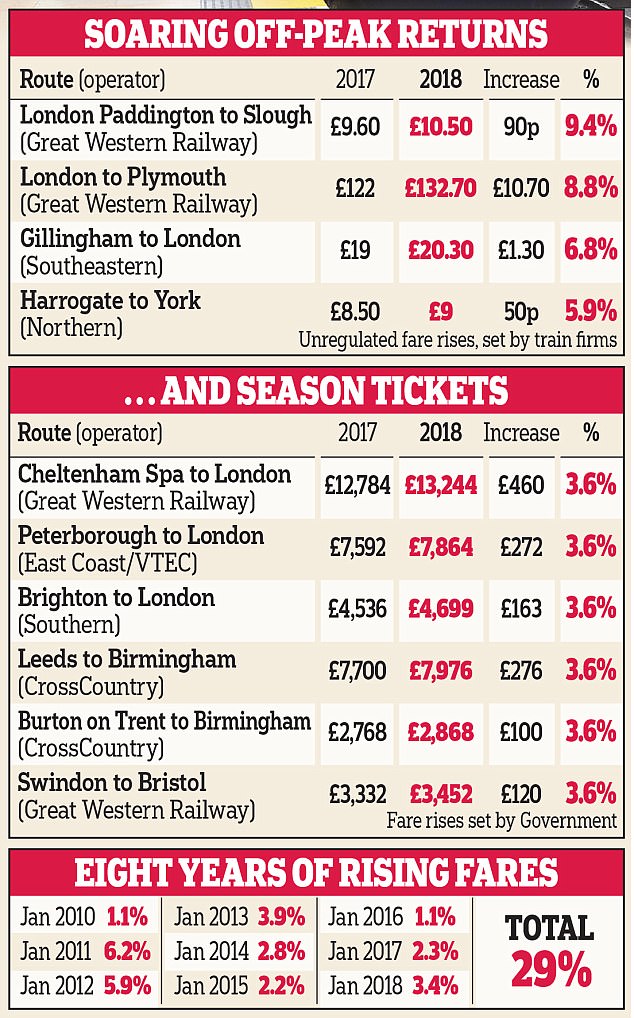 The Transport Secretary will find warm sunny skies when he gets off the plane for talks with Qatar's Prime Minister, Finance Minister and Interior Minister.

He is also due to see the chief of Qatar Airways and is not expected back in Britain before Thursday.

Asked the Prime Minister felt it was appropriate for Mr Grayling to be out of the country, Mrs May's official spokesman said: 'The fare rises we have known were coming for a while.

'The Transport Secretary and Department for Transport have been responding and have issued a full response to those fare increases.'

The spokesman said the Rail Delivery Group, which is not responsible for setting fares, was leading the response today.

Mr Grayling has been subject to reshuffle speculation and Mrs May's spokesman was challenged to say whether he would keep his job.

He said: 'Chris Grayling is working hard and doing a good job as Transport Secretary.'

A Department for Transport spokeswoman said: 'The Secretary of State is currently on a pre-planned visit to Qatar to promote the UK overseas, support British jobs and strengthen the important relationship between the two countries.

'This trip has been specifically arranged to take place outside of Parliamentary time.

'The Secretary of State has repeatedly answered questions on this issue, ever since fare increases were first announced by the industry in August.' 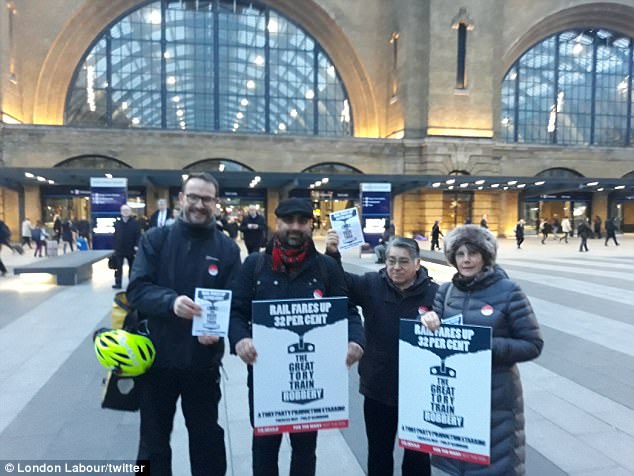 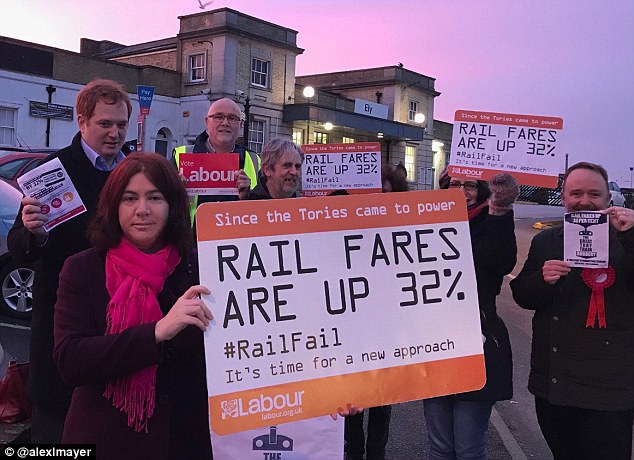 Members of the Labour party were campaigning outside Ely station, talking to commuters about the hike 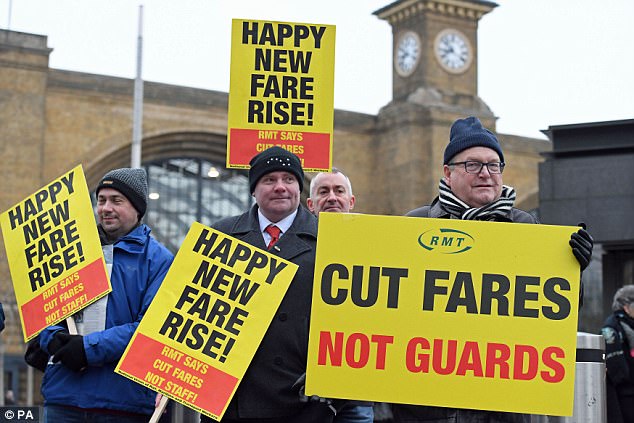 Shadow Transport Secretary Andy McDonald said: 'The Secretary of State for Transport's failure to publicly explain to rail passengers why they are being hit with crushing fare increases today smacks of a man running scared.

'Passengers and taxpayers deserve better than a failing Transport Secretary who refuses to defend his track record.'

Liberal Democrat leader Vince Cable said: 'Rail passengers are shivering on platforms angered by the biggest fare increase in years while Chris Grayling is off globetrotting.

'It's very difficult to see what useful function he can perform in Qatar and Turkey that our excellent trade officials could not.'

Mrs May's spokesman defended the rise in a briefing, insisting the use of the RPI index to set the figure was 'consistent across the railway industry'.

He said: 'RPI is used to account for inflation in the cost of running train services and is used to index some charges.

'But the Government carefully monitors how rail fares and average earnings changes and keeps the way fare levels are calculated under review.'

The spokesman said 97 pence in every pound spent on tickets was ploughed back into railway investment. 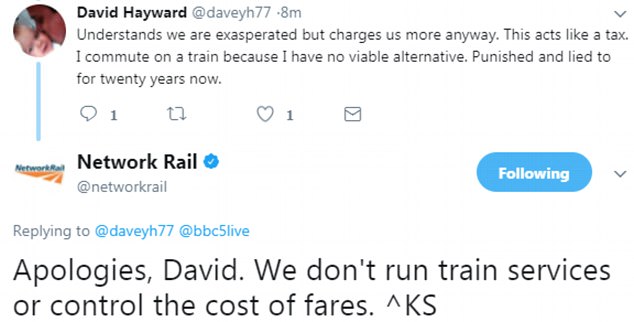 As they faced a sharp increase in their tickets this morning, passengers hit out at companies for 'punishing them and lying' 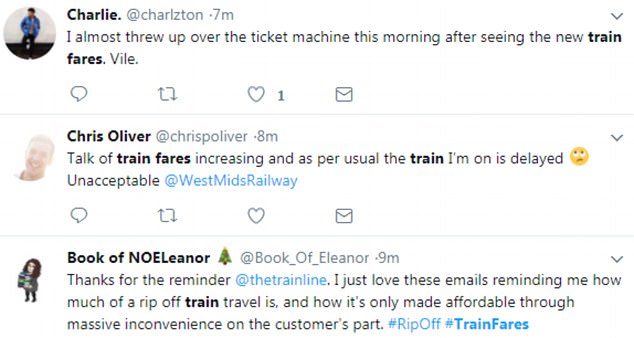 Average ticket prices across Britain have gone up by 3.4 per cent with rail commuters paying up to £2,500 more for a season ticket to work than they were at the beginning of the decade.

Furious passengers have shared their outrage on social media and hit out at rail franchises where some bosses are set to earn huge seven-figure packages.

A report has also revealed how rail passengers in Britain are spending up to five times as much of their salary on fares as other Europeans.

Commuter groups and opposition MPs are staging protests at 40 stations across the country today, including King's Cross station – where the London Labour party labelled the fare hikes 'The Great Tory Train Robbery'.

As people are hit with the biggest fare increases in five years, a report reveals the cost of some season tickets has soared by as much as 50 per cent since 2010.

The highest increase in cash terms is on a Virgin Trains season ticket between Birmingham and London Euston, which has risen by £2,536 since 2010 and now costs £10,564.

The biggest percentage increase was between Tame Bridge Parkway near Walsall and Nuneaton, where the cost of a season ticket has risen 50 per cent or £968 to £2,916. 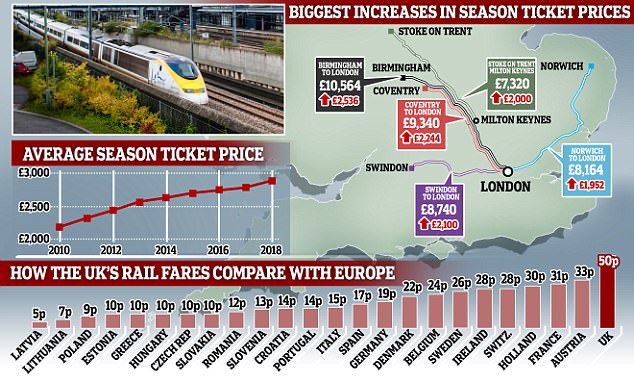 Boyfriend of British woman jailed in Egypt was sacked