Beyond that, however, the Saints coach asserts that teams evolve over the course of a season as they develop chemistry and adjust to roster or positional changes brought on by injuries. 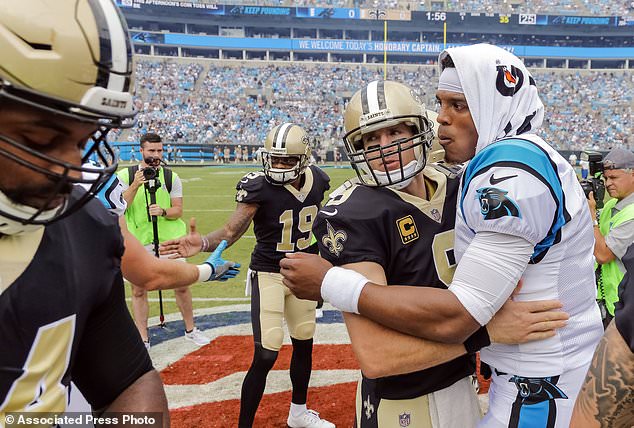 FILE – In this Sept. 24, 2017, file photo, Carolina Panthers' Cam Newton (1) and New Orleans Saints' Drew Brees (9) embrace before an NFL football game in Charlotte, N.C. Saints coach Sean Payton takes a small measure of comfort in New Orleans' regular-season sweep of Carolina. It means the Saints play the Panthers (11-5) in the Superdome, where New Orleans hasn't lost a playoff game since 1992 and is 4-0 in the postseason under Payton. (AP Photo/Bob Leverone, File)

And on Sunday, there will be a different psychology to performing in the postseason, when losing brings the season to a sudden end.

"Each game's different," said Payton, whose team took its first NFC South crown since 2011 by virtue of a head-to-head tiebreaker over Carolina.

"From the midpoint of the season, when (Carolina) got on a roll, you can see the confidence grow with that team. And you're also talking about a team that (two years ago) was in the Super Bowl," Payton said. "The prior two games don't matter."

Payton pointed out that the Panthers not only defeated two of the top teams in the NFL this season – New England and Minnesota – but beat the Patriots on the road.

"I don't think that is overplayed. I think that is a reality. But at the same time, we are playing against a team that has beat us twice," Rivera said. "We have to figure out what went well and improve on that and what went wrong and correct that."

When the Saints pounded the Panthers by 21 in Carolina in Week 3, it began an eight-game winning streak that vaulted New Orleans atop of the division for good.

When New Orleans topped Carolina by 10 in the dome in Week 13, it ended a Panthers four-game winning streak and was one of only two losses in Carolina's past nine games.

Their third meeting – also the first playoff clash between them – is loaded with story lines. Here are some of the main ones:

CAM ON THE RUN: The Panthers have been better when quarterback Cam Newton runs the ball. But Newton, Carolina's leading rusher this season, didn't run much in two losses to New Orleans, gaining 67 yards on nine carries.

That could change with the season on the line. Newton has averaged 12.5 carries for 59.7 yards per game in Carolina's past four games.

While Saints All-Pro defensive end Cam Jordan has done well containing the 6-foot-5, 245-pound, fleet-footed Newton in previous meetings, he said he doesn't exactly enjoy the prospect of having to do so again.

"Who likes facing Cam Newton? I mean, come on," Jordan said. "He's able to escape, spins. He reverse-spins. He pivot-spins. He gets out of the pocket as well as he climbs through the pocket and he's got some weight to him. I mean, he's not a frail guy."

Brees said his two days in Texas was "obviously very sad" at times, but stressed that he "really came back energized."

"Being with my family, and with friends, and with guys that played for my grandfather, and just listening to their stories again, just reemphasizing to me what a great man he was, and what a wise man he was, and just a true American hero," Brees said.

"He was my hero. I learned so much from him and it just reemphasizes all the important things in life, and the values and morals that I want to live by not only in the way I conduct myself as a family man and in the community, but also as a member of this team."

DEFENDING THE RUN: The Panthers finished third in the league against the run, but struggled to stop the Saints.

The Pro Bowl running back tandem of Mark Ingram and Alvin Kamara helped the Saints rush for 149 and 148 yards in two games against Carolina, the two highest rushing totals allowed by Carolina this season.

"We take pride in being good at stopping the run," Panthers outside linebacker Thomas Davis said. "If you look at those two games, we flat out didn't get it done. … It's uncharacteristic of this defense. This weekend should be a much better showing."

GETTING HEALTHIER: The Panthers expect to get two key players back on offense – running back Jonathan Stewart and guard Trai Turner.

Stewart sat out last week's 22-10 loss to Atlanta with back soreness. Turner has missed three games with a concussion.

New Orleans could get starting left tackle Terron Armstead back from a thigh injury that kept him out of last week's 31-24 loss at Tampa Bay. He practiced on a limited basis this week and was listed as questionable. 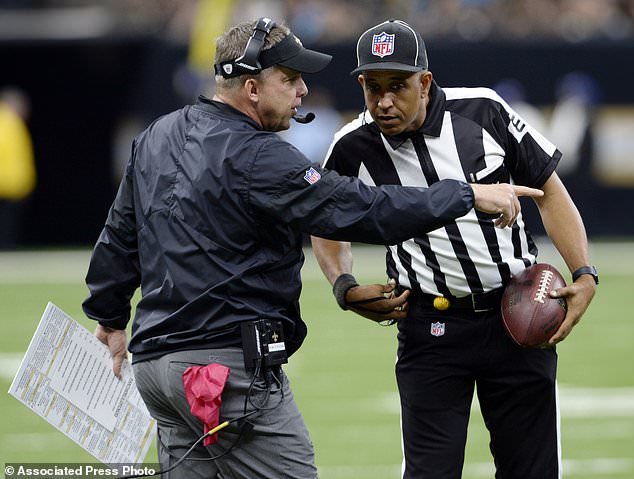 FILE – In this Dec. 3, 2017, file photo, New Orleans Saints head coach Sean Payton talks to an official in the first half of an NFL football game against the Carolina Panthers in New Orleans, Sunday, Payton takes a small measure of comfort in New Orleans' regular-season sweep of Carolina. It means the Saints play the Panthers in the Superdome, where New Orleans hasn't lost a playoff game since 1992 and is 4-0 in the postseason under Payton. (AP Photo/Bill Feig, File)