No one could accuse Emmanuel Macron of being short of ideas. But how many of them will become reality?

The French president laid out his vision for the EU in an op-ed published in multiple European newspapers Monday evening, calling for a “European renaissance” and proposing a raft of new policies and institutions to implement them. He also called for a conference to rethink the EU political project, saying even changes to the blocs governing treaties should not be taboo.

But talk is cheap. As countless national leaders before Macron have found, getting the EU to change course is the hard part.

Heres a run-down of Macrons key proposals, together with analysis by POLITICOs specialist reporters — and our take on how much chance of success they have.

What Macron wants: A lot is left to interpretation from Macrons op-ed but trade is arguably the area where his proposals represent the most radical shift from status quo. They are broadly in line with a recent Franco-German push to rethink the EU approach to competition and trade policy. Macron calls for a “European preference” in public procurement and says the EU should “reshape our trade policy, penalizing or banning businesses that compromise our strategic interests and fundamental values.” He also calls for “penalizing businesses” that compromise “environmental standards” in trade. 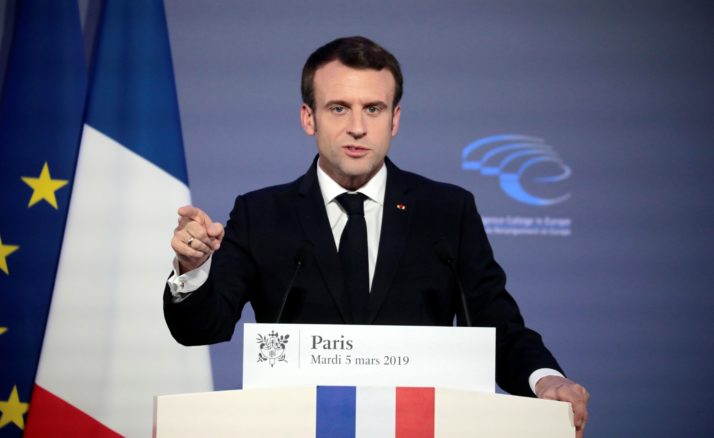 What the EU thinks: Weve heard that before. The “European preference” line sounds a lot like the “Buy European Act” that Macron called for in his election program. But even French officials have admitted that type of protectionist measure is a nonstarter in Brussels.

A more realistic approach — that France has already championed — would be “reciprocity” in public procurement. Thats the notion that EU governments should not buy goods and services from countries that are not open to European companies. The idea is gaining traction, including in Germanys latest industrial strategy. Theres an old Commission proposal to that effect, which could be renegotiated between EU countries after the European election.

As for taking into account the EUs “fundamental values” in trade, Macron has a little credibility problem: When it was suggested to him that Frances strategic arms industry should not be exporting to Saudi Arabia, Macron called an export ban “pure demagoguery.”

Reality check: POLITICOs trade team puts the chances of implementing a policy of soft reciprocity (where non-EU companies are penalized unless their countries open up to EU bids) at 4 out of 5. But that “fundamental values” thing looks a lot like hot air.

What Macron wants: “We need to reform our competition policy,” Macron wrote. Although the specific measures he hinted at are more in the trade domain, his call carries echoes of a Franco-German proposal from last month. That came in the wake of the European Commissions block of the rail merger between Frances Alstom and Germanys Siemens that stirred up ill feelings in Paris and Berlin. Both countries insisted on the need to reform current EU rules to allow European companies to become “global champions.” That requires a rethink of how the Commission assesses mergers, mainly to take greater account of competition at the global level. Another important pillar of the strategy would allow for more state aid.

What the EU thinks: Currently, the EU does not allow its member countries to grant companies specific advantages. But several exemptions allow bypassing that rule, including a recent framework for joint research and innovation projects “of European interest.” France and Germany said this is a “useful” but “very complex” tool and have called for the conditions to be revised.

Responding more broadly to the Franco-German calls, European Commissioner for Competition Margrethe Vestager has defended her existing toolbox, including the projects of European interest and state aid rules to tackle tax avoidance. But in a climate of increasing protectionism across the world, the proposals of France and Germany have some wind in their sails.

Chances of success: 3 out of 5. The reform of competition rules will be discussed in the run-up to, and after, the European Parliament election in May. The Franco-German alliances take is likely to have a strong impact on the final outcome.

What Macron wants: Quite a lot. The French president called for “European supervision” of major digital platforms including “prompt penalties for unfair competition, transparent algorithms,” as well as more funding for innovation (see budget section below). He also wants a “European Agency for the Protection of Democracies” to help countries protect themselves “against cyber-attacks and manipulation,” as well as European rules “banishing incitement to hatred and violence from the internet.”

What the EU thinks: Weve already got much of that in place. Arguably, theres already “European supervision of major digital platforms” thanks to Vestager and her competition department at the Commission and the EU Observatory on the Online Platform Economy, although for now there is no specific focus on algorithm transparency (guidelines on that front will be up to the next Commission). On cybersecurity and election defense, the EU has an action plan to push platforms to be more secure.

The Commission also works with national election officials to deal with cybersecurity threats, and is conducting stress tests on electoral systems. On hate speech and defending democracies, there are EU voluntary codes of conduct but the bloc has been reluctant to move toward regulation.

Chances of success: 4 out of 5 on the supervision of platforms. The Commission is already quite assertive when it comes to antitrust targeting Big Tech, and is expected to put forward new guidelines for dealing with algorithm bias and artificial intelligence. On hate speech, 1 out of 5. Given how much opposition there is to a law regulating terrorist content online, its hard to imagine a consensus for a law on hate speech.

What Macron wants: The French president called for financing “innovation by giving the new European Innovation Council a budget on a par with the United States in order to spearhead new technological breakthroughs such as artificial intelligence.” Macron thinks big on EU agencies: As well as a European Agency for the Protection of Democracies, he wants a “European Climate Bank to finance the ecological transition,” a “European food safety force” and a “European Council for Internal Security.” But his big plans include no mention of how they would be financed.

What the EU thinks: The European Commission has proposed an increased in research spending for the blocs next long-term budget, which is set to run from 2021 until 2027. Its budget proposal also includes spending on climate and the environment, as well as proposed programs for funding border management. 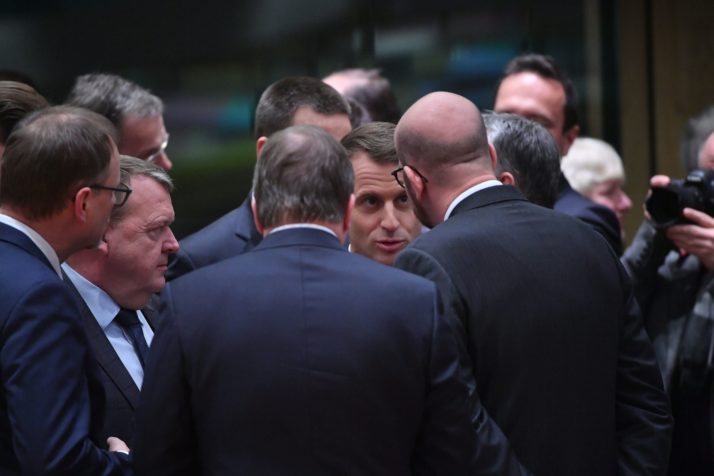 Chances of success: 1 out of 5. A boost to EU spending in order to finance any of Macrons big ideas will depend in large part on the willingness the EUs so-called net contributors — wealthy countries like Germany, France and the Netherlands — to put more money into the EUs coffers. At the moment, a group of frugal countries that includes the Netherlands, Denmark and Sweden are resisting calls for an increase in national contributions to the EU budget post Brexit. Without new EU funding, many of Macrons ideas face an uncertain future: The EUs budget requires unanimous agreement of all member governments.

What Macron wants: Macron says he wants pesticide use halved by 2025. He has also suggested establishing a “European food safety force” whose job it would be to improve controls on food, counter the threat of powerful lobby organizations and bolster the independence of scientific assessment studies regulating hazardous substances.

What the EU thinks: Halving pesticide use by 2025 is already French government policy — but French farmers are hopping mad because they say there are few alternative solutions. There are currently no European laws being proposed that would seek such an aim. Brussels is, however, in the final stages of reforming the so-called General Food Law, whereby the European Food Safety Authority (EFSA) should gain additional powers to conduct its own safety tests on products such as pesticides. EFSA last year was allocated an additional €60 million per year to do the same job that Macrons food safety force would likely do. 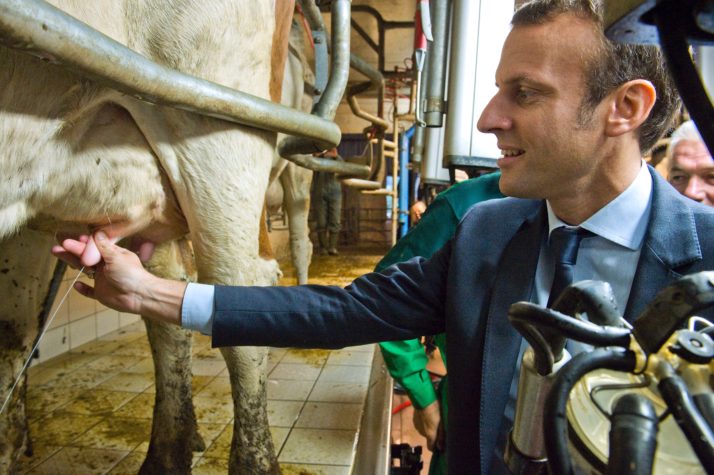 Macron milks a cow in Laroquevieille, near Aurillac in 2016 | Thierry Zoccolan/AFP via Getty Images

Chances of success: 1 out of 5 for pesticides, 4 out of 5 for the food safety watchdog (because it pretty much already exists). Reducing pesticide use by 50 percent inside six years is a long shot — even for France, never mind all of Europe. France already asks Europe for hundreds of so-called derogations that allow farmers to continue using banned substances. And uptake among farmers to transition away from using glyphosate, the worlds most-used herbicide, has been slow.

What Macron wants: The French president wants the EU to aim for zero carbon emissions by 2050. He also proposes a European climate bank to finance the transition. Macrons other ideas for “spearheading the environmental cause” include “penalizing businesses” that compromise on environmental standards.

What the EU thinks: Macrons push for carbon neutrality is in line with the European Commissions long-term climate vision; although the EU executive advocates for a climate-neutral EU by 2050 — which covers all greenhouse gases, and not just carbon dioxide. But hes one of few heads of state in the ambition camp. Recent discussions among ministers showed a clash between countries arguing for swift and deep cuts in carbon emissions and those worrying about economic competitiveness and jobs.