Louisiana churches relieved after arrest of suspect in fires. ‘Now we can start healing,’ pastor says

The pastor led the Greater Union Baptist Church in Opelousas before it was burned to the ground on April 2. Just a week earlier, St. Mary Baptist Church in Porte Barre had been set ablaze, and on April 4, Mount Pleasant Baptist Church was the last to burn. Authorities have arrested Holden Matthews, 21, in connection with the church fires that terrified the communities in Louisiana. "Now, my concern is when do we get back to normal," Richard told CNN affiliate KLFY. "When do we put our church family back in their home?"

Matthews is charged with three counts of simple arson on a religious building, State Fire Marshal H. "Butch" Browning said. Each charge carries a maximum penalty of 15 years. The suspect has no history of violence or prior arrests, and he may have been influenced by "black metal" music and its "associated history with church burnings," authorities said. Browning confirmed the fires were intentionally set. The suspect's father is a local sheriff's deputy who broke down when he found out about Matthew's involvement with the fires, St. Landry Parish Sheriff Bobby Guidroz said. "He was shocked and hurt as any father would be," Guidroz said. "He was in terrible shape."Browning says they're not looking for any other suspects, but the investigation is still ongoing. "I was hoping that this is the only individual involved and that now we can start healing," Richard told KLFY. "I'm excited for what God is going to do in the community."

A time for recovery

Congregants have been attending service in nearby churches and their leaders are ready to begin the recovery process."It started off a dark moment in our lives, but with the rebuilding process you're going to see some things … that are going to be very bright for our churches," Mount Pleasant Baptist Church Pastor Gerald Toussaint said. Pastor Easton Shelvin of Truth is Ministries told KLFY the way forward for the community is prayer and an increase in faith. "People who trust in God really need to see God is allowing things to happen to catch our attention," he told the affiliate. "I think God set us up to be a great light right now." 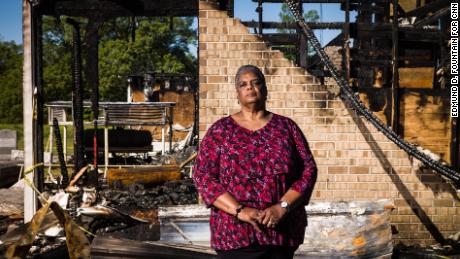 He said he believes people who "do those kinds of acts are lost and searching for attention."CNN learned Matthews had previously expressed disgust with Baptist beliefs on Facebook. Responding to a post about "afrikan spirituality," Matthews, posting under the name Noctis Matthews, said he cannot "stand all these baptists around here, bunch of brainwashed people trying to find happiness in a religion that was forced on their ancestors just as it was on mine."He also said he wished that "most blacks [sic] people would look into ancient beliefs of pre Christian Africa."CNN reached out to Matthews' lawyer and the prosecutor's office but have not yet received a response. When CNN asked authorities if they were aware of the posting, they Read More – Source