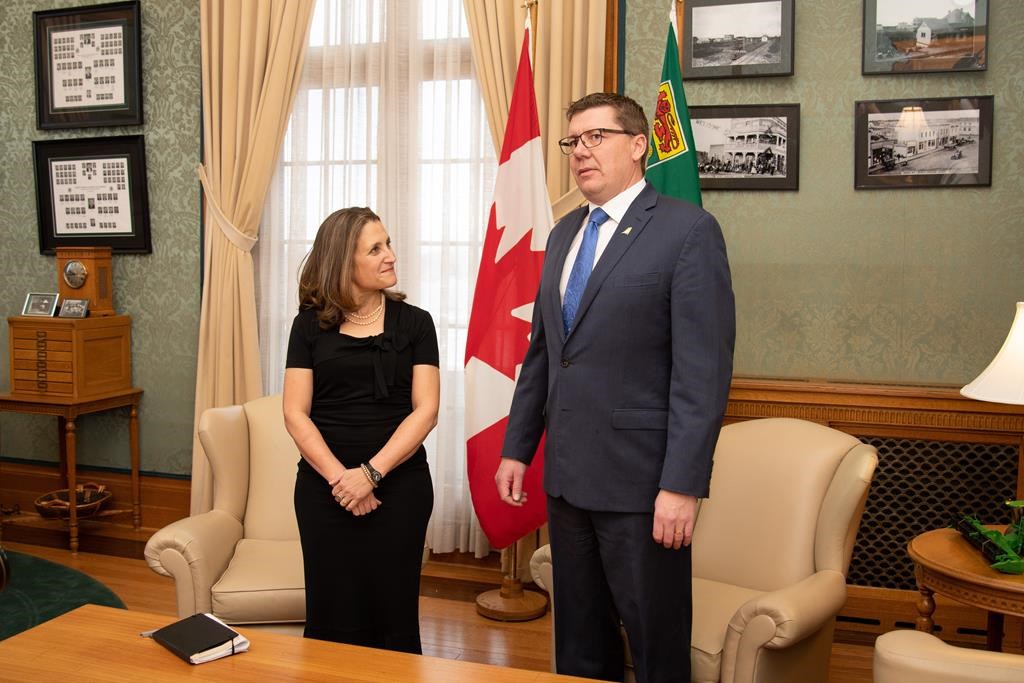 REGINA—Saskatchewan Premier Scott Moe says he had a more cordial meeting with Federal Intergovernmental Affairs Minister Chrystia Freeland than he did with Prime Minister Justin Trudeau.

Moe and Freeland met for nearly two hours in his Regina office on Nov. 26, but Moe said no commitments were made on his list of requests to the federal government—including cancelling the federal carbon tax and reworking equalization.

He said that wasnt the purpose of the meeting.

The visit was designed so Freeland could listen and get up to speed on what Moe said are challenges facing his province.

Moe described a meeting earlier this month with Trudeau in Ottawa as disappointing and said the province would be looking at ways to assert more autonomy.

He described his sit−down with Freeland differently.

“It was just a much more cordial meeting,” Moe said.

Freeland, also named deputy prime minister in Trudeaus new cabinet, has been tapped to try and overcome regional tensions after the Liberals failed to win any seats in Saskatchewan and Alberta in Octobers federal election.

The Alberta−raised politician met on Nov. 25 in Edmonton with Alberta Premier Jason Kenney, who told her that there are real tensions in the country and Albertans want to be treated fairly.

Freeland said Moe was the first person she spoke with after the federal cabinet was sworn in last week. They discussed concerns over the Canadian National Railway Co. strike, which reached a tentative agreement before their meeting.

“The people of Saskatchewan sent a message to our government on election day. And so Im here to talk to the premier to look for common ground, and above all, to listen,” Freeland said before her visit with Moe.

Alex Lawrence, a spokesperson with her office, said the pair talked about the end of the CN strike as well as challenges in the energy sector, tackling climate change, pricing pollution, agricultural exports and innovation, and ratification of the new NAFTA.

Lawrence described the meeting as “productive.”

“Todays discussion focused on how the provincial and federal governments can work together in the months ahead. As the deputy prime minister said, now is the time to listen to peoples concernsRead More – Source

Bodies of Victims Found in UK Truck Repatriated to Vietnam