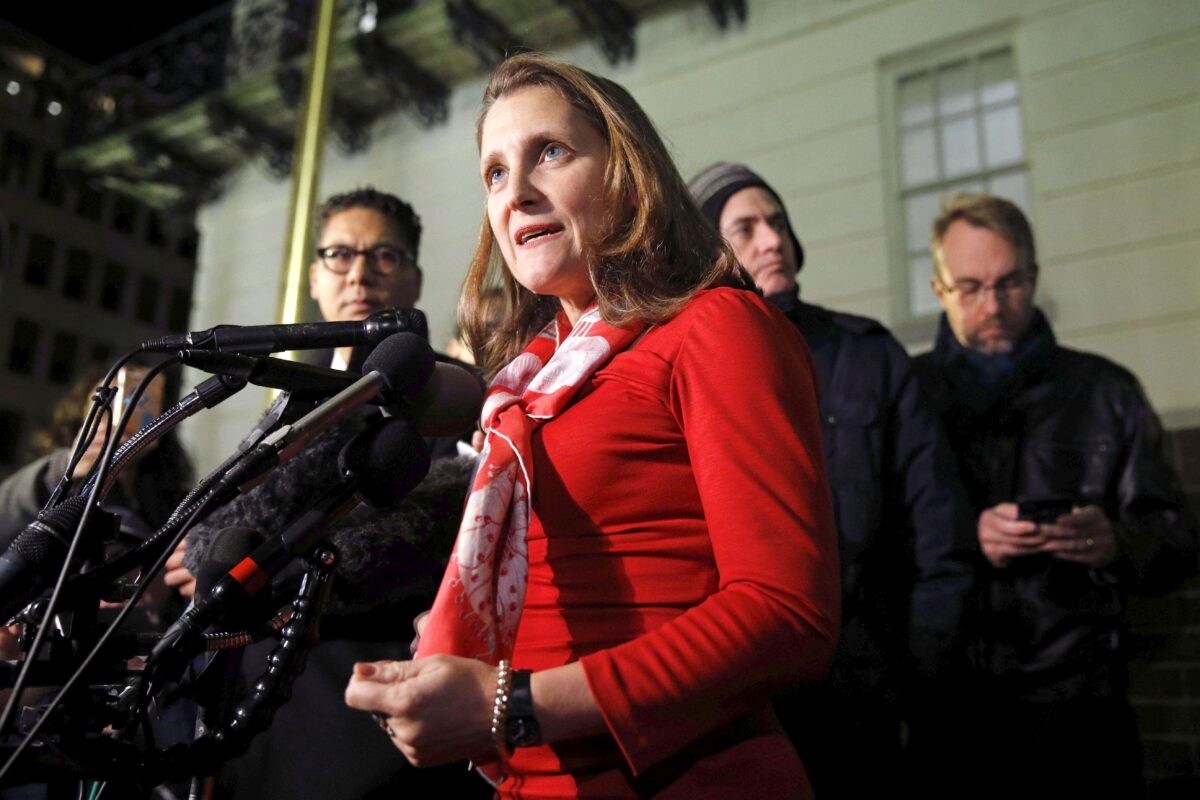 “Today it was a good meeting, good work has been done,” Freeland said after a session that lasted about an hour.

Freeland said she will continue to be in close communication with her counterparts during the next few days, but suggested no talks were planned on Thursday, when Americans celebrate Thanksgiving Day.

She declined to confirm whether she would be hosting Seade in Ottawa, even though the Mexican official said he planned to be there Friday.

Officials from the continents three countries held talks earlier Wednesday in Washington on the final obstacle to ratifying the new United States-Mexico-Canada Agreement ahead of the U.S. Thanksgiving holiday weekend—a sign of the dwindling American legislative calendar.

Freeland, who is the lead minister for the renegotiation of the North American Free Trade Agreement, started her day with a federal cabinet meeting in the Ottawa area.

Canadian government officials, speaking on the condition of anonymity because of the sensitivity of the situation, said Canadas acting ambassador Kirsten Hillman and chief trade negotiator Steve Verheul represented Canada in talks earlier in the day.

But Freeland had been in close contact with Lighthizer, speaking on the phone with him Tuesday and Wednesday, said officials.

Mexico is the only country to legally approve the deal, while Canada is waiting on the U.S. Congress to make its first move towards ratification. Officials say Canadas approach remains the same—it will only move “in tandem” with the United States.

Freeland said she respects the domestic ratification process in each country.

“Where we can be a supportive partner, we are very happy to do that, and that is why we are here,” she said after the meeting in Washington.

Seade said only that the meeting was “good” because “we make constant progress.”

The American Thanksgiving holiday was seen by many as one of the last reasonable opportunities for U.S. lawmakers to practically dispatch with USMCA amid the broader impeachment drama engulfing President Donald Trump, and the looming political shift ahead of the November 2020 presidential election. Trump has levelled scathing criticism on the Democrats for blocking progress on the trade deal by focusing on impeachment.

Democrats control the House of Representatives and have negotiated with Lighthizer for months to strengthen several of the deals provisions, including improved labour standards to ensure that Mexicos much-promised workplace reforms can be enforced.

During the long and at times acrimonious renegotiation of NAFTA, Canadian and American negotiators pushed Mexico to improve labour standards to prevent companies in the manufacturing and auto sectors from relocating to where employers can pay them far less. Now, the Americans want to make sure those changes have teeth.

That could come in an addendum or side letter to the USMCA. As for the core text of the deal, Canada has maintained it considers that signed and sealed, not to be re-opened for further negotiations.

Nancy Pelosi, the Democratic House leader who controls the introduction of a ratification bill, said earlier this week she and Lighthizer “were within range of a substantially improved agreement for Americas workers.” But she added that she wanted Lighthizer to put that in writing “for final review.”

Pelosi has said she wants a new deal finalized by the end of the year.

Observers in the U.S. and Read More – Source