Argentina’s President Alberto Fernández is to present a new bill to Congress on legalising abortion – a campaign pledge delayed by the coronavirus outbreak.

He says the measure will help save lives, as every year almost 40,000 women are treated in hospital after botched illegal procedures.

Abortion in Argentina is currently allowed only in cases of rape, or if the mother’s health is in danger.

It is largely prohibited across Latin America, except in restricted cases.

If the bill is passed, Argentina – an overwhelmingly Roman Catholic nation – will become the largest country in the region to legalise abortion.

Mr Fernández, who was sworn in as president in December, had previously described abortion as “a matter of public health”.

In 2018, the Senate rejected legalising abortion up to 14 weeks of pregnancy. Back then, the government did not back the proposal, and the Catholic Church was strongly opposed.

Many Argentines who have protested in their thousands for reform are hoping that the president’s support this time will be decisive.

The debate surrounding abortion in Argentina was reignited last year, when an 11-year-old rape victim gave birth by C-section.

The girl, who had been raped by her grandmother’s 65-year-old partner, had requested an abortion but the procedure was repeatedly delayed over questions about the identity of her guardian.

Eleven-year-old’s C-section sparks debate
Cuba, Uruguay and Guyana are currently the only Latin American countries to permit abortion in the first weeks of pregnancy.

While some other countries allow abortion in the case of rape or risk to the mother’s life, it is completely banned in El Salvador, Honduras, Nicaragua and Haiti.

In El Salvador, dozens of women have been imprisoned for the deaths of their foetuses in cases where they say they suffered miscarriages or stillbirths.

Getting ‘crushed’ on Melbourne’s path to coronavirus success 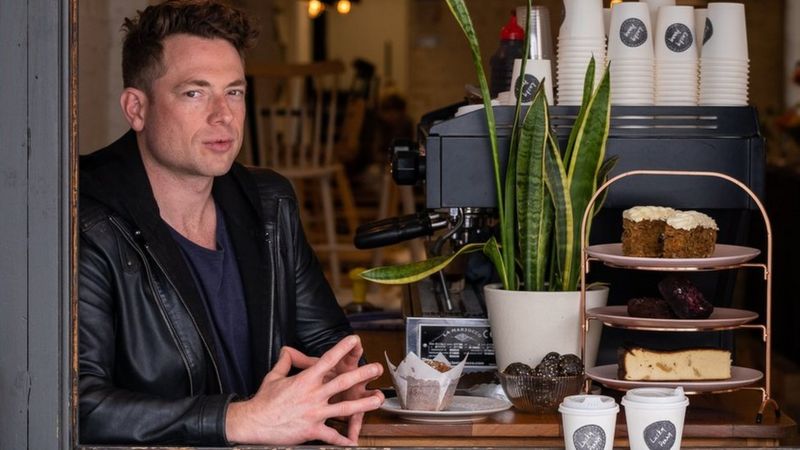 “It was pretty grim. There was a lot of sadness in people’s eyes. A lot of fear of the unknown.”

“The streets were completely deserted. It was like something out of [post-apocalyptic film] Mad Max,” says Mr Lanigan, who owns cafe Lucky Penny on the iconic shopping strip.

Melbourne first went into lockdown in March, but its second, which began in July after a fresh Covid outbreak, was a bigger blow. That lockdown went on to become one of the longest and strictest in the world.

“It was brutal,” Mr Lanigan says of trying to keep his business afloat. “It was like I was in a boxing match and I just got knocked to the floor. For a moment there, I felt like maybe it wasn’t worth getting up.”

But things are slowly turning around. On Friday, Melbourne and the state of Victoria achieved one measure of “elimination” of the virus – 28 consecutive days with no new infections. After seeing daily cases soar above 700 in July and August, the city is seen as an example for the rest of the world on how to handle a second outbreak.

Now on reopened Chapel St, music and chatter fill the air as people enjoy their Sunday brunches. Customers are coming in and out of shops on both sides of the road. The scene is very Melbourne.

Despite the high spirits, everywhere you look there are signs of how battered this city has been.

Many businesses are still shut, some displaying “for lease” signs. Others are open but half empty. Placards saying “support local” dot Melbourne.

“Most of Melbourne was feeling just crushed,” she says. “Our spirits were crushed, the streets were dead. I didn’t actually want to come to my own business, which I’ve worked [on] my entire life to get to this point.

“It was a roller coaster of emotions. There were days where we just didn’t want to get off the couch. I just wanted to stay home and cry.”

The lockdown divided the city between those who supported it and those who said it was too extreme and too long.

The huge public health benefit has also come at a huge cost. Melbourne’s economy could be reduced by up to A$110bn (£60bn; $81bn) over the next five years because of the pandemic. Victoria is projected to lose up to 325,000 jobs this year alone, according to a report by the City of Melbourne.

“We could have easily just shut the doors. Instead we decided to push harder.” Part of that, he says, was deciding to use his takeaway window as a way to keep the local community connected.

“They would come down and have a five or a ten-minute conversation [at the window]. It was their one piece of social interaction for the day.”

It became clear through these conversations how dire the situation had become for many people, he says.

“We were hearing about people not having food on their tables. Every second person you spoke to was struggling with something. I could see the fear everywhere. From people telling me ‘I’m missing my mum, I’m worried about my grandma,’ to ‘I’ve had enough’.”

After a three-hour conversation to talk a friend out of suicide, he decided to take a mental health first aid course online.

“He had a breakdown and he was on the edge of killing himself,” Mr Lanigan says. “He’d lost his events company, and there was no roadmap, no direction, no hope.”

“The conversations I was having sitting at that window on the street every day, it was evident that people needed help, and I needed to be more qualified and confident to give it.”

He says the real economic and mental health toll will become clearer in the months to come, especially when government wage subsidy schemes end.

On Friday, Victoria’s chief health officer Brett Sutton said the 28 days without a new infection was “rightly worthy of celebration”, but acknowledged many had “suffered enormously”. More than 800 people in the state had died, he added.

“So it’s only right that many of us still feel anxious, angry or burdened by sadness,” he tweeted.

Ms Glentis says that reopening feels like she’s starting from scratch, with the shop sometimes empty on weekdays.

“The business was decimated. We’ve lost a lot of our regular customers and our corporate customers in the area. A lot of the residents moved. It means that we literally have to start from zero again.”

“It is a little bit soul-destroying, but I am the most positive person, and we will work as hard as we can to get back to where we were.”

Ms Glentis says she is anxious about another outbreak, however.

“What worries me the most is having to do this all over again. I don’t think on a personal level, I will be able to get through this again.” 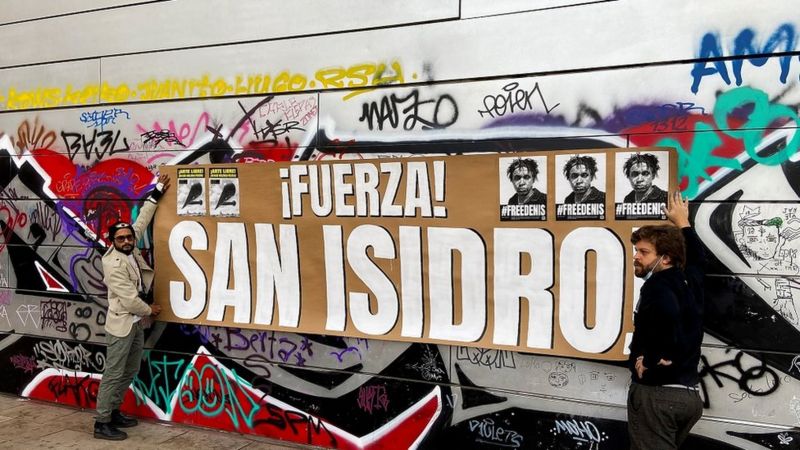 A Cuban dissident group says police have raided its HQ in the capital, Havana, detaining members on hunger strike over the jailing of a rapper.

The San Isidro Movement said some people were beaten, and social media was temporarily shut down to stop images of the raid being shared online.

Rapper Denis Solis was sentenced after a row with a police officer.

Cuban authorities said the raid was carried out over a health violation related to coronavirus.

Founded in 2018, many of its members are artists, musicians, journalists and academics who oppose what they call oppressive measures by Cuba’s communist government.

The movement told BBC Mundo that its HQ – an apartment in the capital – was raided on Thursday night. About an hour after midnight local time (05:00 GMT Friday), the group said three of the 14 people detained were out of contact. Six members have been on hunger strike.

The group is demanding the release of Solis, who was sentenced to eight months in jail for contempt after a verbal altercation with a police officer.

In a statement, Cuban authorities said they carried out the San Isidro raid because a journalist, Carlos Manuel Álvarez, had broken security protocols related to the spread of coronavirus, and was taking part in protests at the building.

“This action took place in full compliance with the law and without violating the citizen rights of any of those involved,” the statement read.

The San Isidro group called it an “absurd” pretext.

The movement has often stirred controversy by mixing art with political activism. As a symbol of civil disobedience, one its members, Maykel Castillo, sewed up his mouth after being summoned by police for questioning.

Human rights NGOs and the US state department have called for Denis Solis to be released, and for the government to engage in dialogue with the San Isidro Movement.

The Cuban government alleges that he and the movement are funded by Washington and are being used to subvert the state. The San Isidro Movement has denied these allegations.

These protests, although unrelated, come amid severe economic strain in Cuba over the global coronavirus pandemic.

While a Joe Biden administration may ease some of President Trump’s policies towards Cuba, it is likely to maintain the criticism of the communist-run government over human rights and its repression of dissent, reports Will Grant, the BBC’s Cuba correspondent. 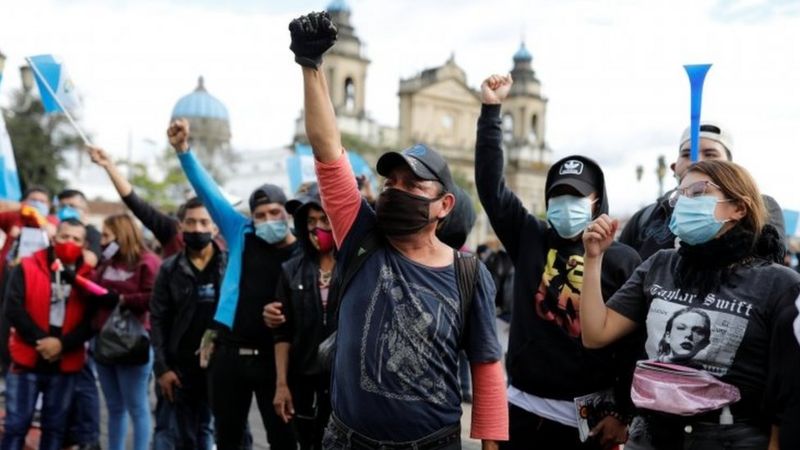 The Speaker of Congress in Guatemala has said a controversial budget that triggered protests during which parts of the Congress building were set on fire on Saturday will be shelved.

Speaker Alan Rodríguez said Congress would not send the budget to the president to sign and it would therefore not come into force.

He made the announcement after fresh protests on Sunday.

Protesters were angry that spending on health and education had been cut.

In a pre-recorded message broadcast at midnight local time (06:00 GMT Monday), Mr Rodríguez said that leaders of some of the parties represented in Congress had agreed to shelve the budget for the sake of Guatemala’s stability.

He was surrounded by 16 lawmakers from parties that back the government of conservative President Alejandro Giammattei.

Mr Rodríguez did not say if Congress would draw up a new budget or what changes it would make ahead of a December deadline for the budget to be passed into law.

Opposition lawmakers also questioned whether it was in the Speaker’s power to shelve the budget, which was passed by 115 out of 160 members of Congress.

Critics of the budget said it prioritised big infrastructure projects over spending on health, which they argued was badly needed at a time when the country continues to battle the spread of the coronavirus.

According to Johns Hopkins University, there have been more than 118,000 confirmed cases of Covid-19 in Guatemala and more than 4,000 people have died in the Central American nation of 17 million inhabitants.

The budget, which Congress passed on Wednesday, was the largest in Guatemala’s history and amounted to $13bn (£9.7bn)

It triggered large protests with demonstrators saying they were angered that the bulk of the funds would benefit big business.

The government said that the budget had been “misreported” and that it contained funds to build hospitals.

But protesters on the streets at the weekend, many of whom were young, carried banners reading: “They messed with the wrong generation”.

While much of the protest on Saturday was peaceful, a group of hooded demonstrators set fire to part of the Congress building in the capital, Guatemala City.

Firefighters put the blaze out but the administration of President Giammattei called it an “act of terrorism”.

Pressure has been growing for President Giammattei to resign. He was elected last year and had campaigned on a promise to increase prosperity by attracting foreign investment.

He has come under widespread criticism for his handling of the coronavirus pandemic. Critics say that hospitals have struggled to cope with the increased number of patients and there has been little financial help for those who could not work due to lockdowns.