Tourists and travellers arriving in Spain from ‘high-risk’ countries after 23 November without a negative PCR test, may be fined up to €6,000 in addition to having to undergo a rapid test as a measure to guarantee safe mobility, the Spanish Foreign Minister Arancha González Laya has said.

‘They are serious fines, dissuasive fines,’ she also stressed, in statements to Antena 3 when asked about the new measures recently announced by the Ministry of Health. You can also read our full report here: Spain to require visitors from high-risk countries to present negative PCR tests.

The new measure is being introduced in addition to the health controls already performed on all inbound passengers at ports and airports in Spain – specifically temperature controls and visual checks.

The current ‘Health Control Form’, which all passengers must fill in before entering Spain, will now include a question regarding whether they can produce a negative PCR test taken within 72 hours prior to their arrival. Proof of this test result may be requested from passengers at any time. The document must be original, drafted in Spanish or English, and may be submitted on paper or in an electronic format.

According to the Spanish government’s website, ‘If the form has not been filled in online, using the code generated on the website www.spth.gob.es, or the Spain Travel Health-SpTH app, it may be presented on paper before departure. In this case, it must be accompanied by the original document certifying the diagnostic test.’

Passengers whose temperature, visual or documentary checks indicate that they could be suffering from Covid-19 will then also be required to undergo a diagnostic test taken at the airport or port on their arrival in Spain.

González Laya also said that international mobility has only meant ‘0.08% of Covid-19 imports’ – adding that out of the 5,200,000 travellers who have entered Spain since July, ‘barely 4,800 have tested positive’.

‘Looking at the numbers this is not a problem,’ she said, ‘but we have to make sure it is not in the future.’ She insisted that the new measure aims to ‘create trust’ and be able to ‘gradually open up spaces for mobility’ that are safe.

For visitors arriving from EU countries or from those within the Schengen area, the criteria for a country of high risk will be determined by the European Centre for Disease Prevention and Control (ECDC). The ECDC publishes weekly maps with the current risk status of each country using a traffic light system of green, orange or red, as determined by the 14-day incidence and positivity rates of Covid-19.

For all other countries, the reference to evaluate risk will be 150 cases per 100,000 inhabitants in the last 14 days, according to criteria of the World Health Organization (WHO). 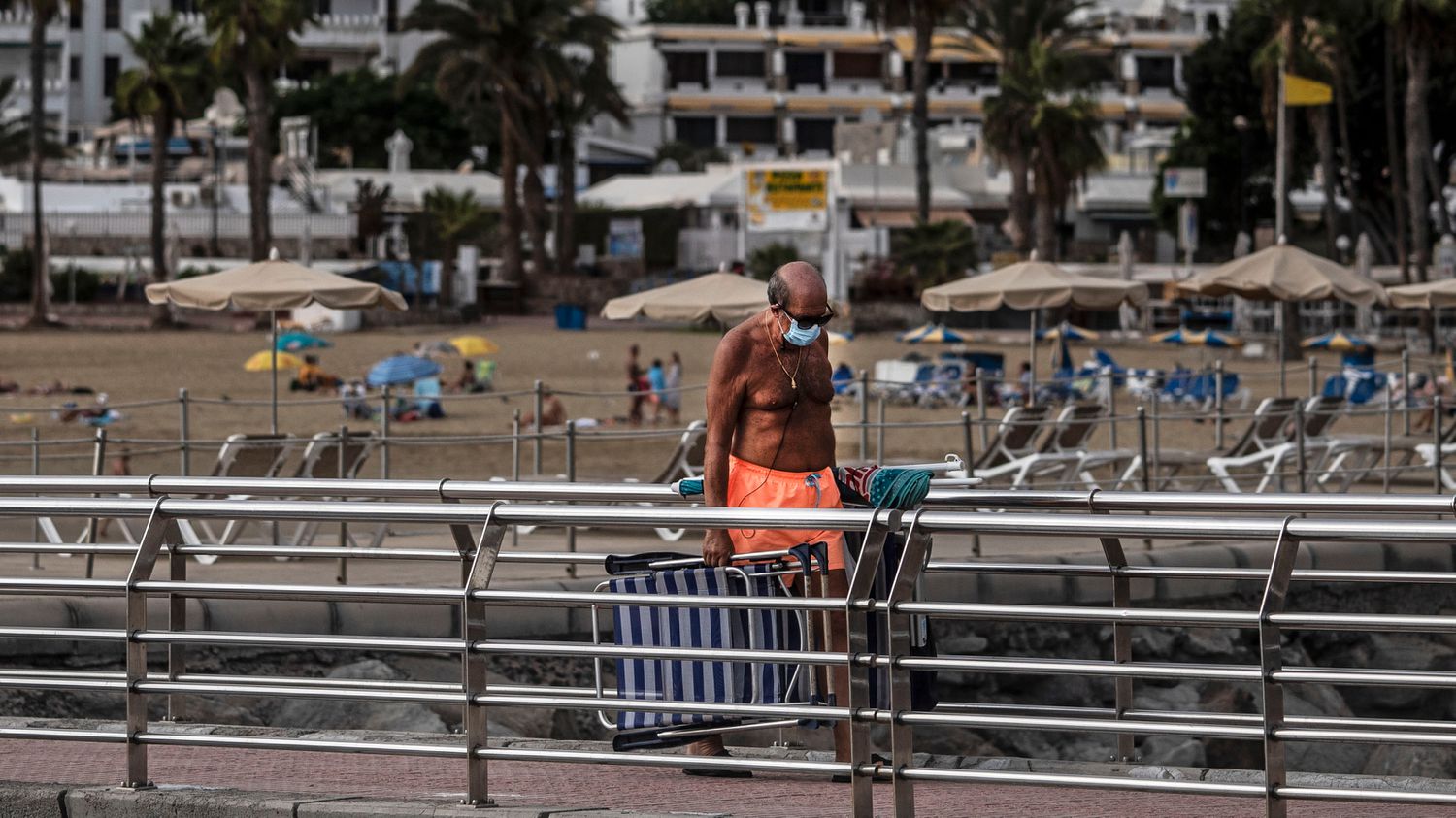 The Dunes of Maspalomas, one of the coastal gems of the Canary Islands, have been a silent witness to the fall in tourism in the Spanish archipelago. Despite the pleasant 22ºC weather, its beach bars are closed and the sun loungers are stacked up along mile after mile of deserted sand.

With less than a month to go before the start of winter, which is the high season for tourism here, this image has set off alarms everywhere. The regional economy has a lot to lose: the tourism industry represents over a third of gross domestic product (GDP) and provides four out of every 10 jobs in the region.

Tourism has been languishing as a result of all the restrictions imposed to fight the coronavirus pandemic. And the new requirement for a negative PCR test for visitors coming to Spain by air or sea, which went into effect on Monday, is the last straw, according to industry representatives.

Business leaders and government officials in the Canary Islands claim that this poses a risk for the region’s peak tourism season. While the regional government introduced a similar requirement on November 14, affecting not only foreign visitors but Spanish ones as well, the difference is that antigen tests were admitted in the second case.

The tourism sector says that the quicker, cheaper antigen tests, which deliver almost immediate results, did not affect bookings. But as soon as the PCR requirement went into effect, demand plummeted. Hotels, travel agencies, tour operators and airlines are pushing for the government to accept antigen tests as a way for visitors to prove that they are free of the coronavirus. Otherwise, they say, the winter season will be lost.

“This makes tourism non-viable due to the expense of PCR tests [over €100 per person]. When mobility is allowed again in Britain and Germany, it is very likely that they will not come to the Canary Islands in these conditions,” said a representative of the Meliá hotel chain. Another major hotel brand, Iberostar, also wants authorities to accept antigen tests.

The obligation to produce a negative PCR test taken no more than 72 hours before arrival currently affects tourists from 65 countries where the 14-day cumulative number of coronavirus cases per 100,000 inhabitants is over 150. This list will be reviewed every 15 days according to the risk map offered by the European Center for Disease Control (ECDC), as established by the Spanish government in the Official State Gazette (BOE).

Jorge Marichal, president of the hotel association Ashotel, notes that the Spanish executive rejected PCR tests in the summer, yet embraces them now that there are other alternatives. He also underscores that the European Commission recently recommended the widespread use of rapid antigen tests, which are less reliable but produce faster results.

The government says it is working to reach a European agreement on joint rules for accepting the results of antigen tests. “We are going to defend this position within the EU. It’s an important step for the Commission to have recommended [the tests],” said a source at the Spanish Tourism Ministry.

“It is essential for Spain to use its influence in Europe to get this changed,” said Juan Molas, president of the tourism board Mesa del Turismo. “The PCR tests are expensive and difficult to access in many countries, leading to a drop in bookings,” added José María Mañaricúa, president of the Federation of Hotel and Tourism Entrepreneurs of Las Palmas.

The regional government agrees with industry leaders. The tourism chief, Yaiza Castilla, recently described the PCR-only requirement as “a stone blocking the path.”

The move casts a new shadow over the sector’s hopes to save the winter season following a lost summer. These hopes had been fueled by the creation of safe travel corridors between the Canaries and two countries that account for the bulk of visitors to the islands, Britain and Germany.

“Tour operators are already canceling flights because they can’t deal with the cost,” said Santiago de Armas, head of the Lopesan hotel chain. Raúl González, CEO of Grupo Barceló, agreed: “Everything gets more complicated. Faced with constantly changing measures, some customers would rather not travel until things get resolved.”

But the demand is still there, and recent experience shows that antigen tests do not slow down visitor flows. The sector is now hoping for a government announcement accepting the faster antigen tests. Otherwise, more hotels could close in the coming weeks, warn industry leaders. “It’s not going to be a good season. We are even considering closing some of the hotels that are open,” said a source at Meliá.

The government of the Canary Islands is also looking forward to December 1, when confinement measures will presumably be lifted in England. Regional premier Ángel Víctor Torres has set that date as the deadline to reach a negotiated deal that will make the central government accept both PCR and antigen tests for visitors coming by sea or air to the country, including to the Canary Islands.

In the meantime, there will still be two rules in place: the national one requiring PCR tests from international visitors, and the regional one requiring antigen tests for Spanish nationals coming to the Canary Islands and staying in hotels or other kinds of tourist accommodation.

CARAVAN SITES and holiday parks have been closed since March, but now the weather is warming up Brit..

CARAVAN SITES and holiday parks have been closed since March, but now the weather is warming up Britons are hoping to escape for a staycation. When will these sites reopen?

Caravan sites and holiday parks in Britain have seen a surge in popularity in recent years as the trend for staycations amid Brexit rose. Britons have been confined to their homes since March 23, but now new lockdown easing guidance has provided insight into when certain sectors of normal life will reopen. So when are caravan sites and holiday parks likely to reopen?

The Government published a 50-page document earlier this month revealing the blueprint plan for easing coronavirus lockdown restrictions across the UK.

The rollout of these measures is expected to be undertaken in three distinct phases:

Phase two will come into effect at the earliest from June 1, and these measures include:

Phase three will begin at the earliest from July 1 and will involve:

During the first stage of lockdown from March 23 to May 10, travelling to other parts of England has been banned.

In fact, many important figures in the coronavirus response, including chief scientists, have been forced to resign from their roles after breaking these rules.

The following four specific and essential reasons were the only reasons one was permitted to leave their home: END_OF_DOCUMENT_TOKEN_TO_BE_REPLACED

Azerbaijan Tourism Board to drive GCC visitors with Wego partnership

Wego has collaborated with Azerbaijan Tourism Board to invite travellers from the GCC to take anothe..

Wego has collaborated with Azerbaijan Tourism Board to invite travellers from the GCC to take another look at the country and experience its wide array of sights and activities.

Azerbaijan is one of the top three destinations in Europe for MENA-based travellers.

A safe and family-friendly place that has attracted as many as 1.4 million tourists in the first half of 2019, Azerbaijan is the perfect scenic getaway for enjoying a plush European experience at a very affordable price.

Azerbaijan is growing quickly into one of the worlds most exciting emerging holiday destinations.

Inviting all GCC residents with a visa on arrival, there has been a growing demand to increase direct flights from the Middle East. Many airlines including Emirates, Etihad Airways, flydubai and Air Arabia have expanded their services to the capital city of Baku, as well as Gabala, a beautiful city in northern Azerbaijan.

Recently, an increase in the influx of Arab tourists has been witnessed since Flynas, Saudi Arabias low-cost airline, announced new routes to Baku.

Florian Sengstschmid, chief executive of Azerbaijan Tourism Board, said: “We are delighted to start this joint collaboration with Wego to raise awareness about what Azerbaijan has to offer all types of travellers from the GCC countries.

“Located on the border of Europe and Asia, our country is a true blend of the best of east and west, with so many unique opportunities for unforgettable experiences and adventures.

“We have everything from ancient crafts and culture to UNESCO heritage sites and breath-taking mountain and sea landscapes. END_OF_DOCUMENT_TOKEN_TO_BE_REPLACED