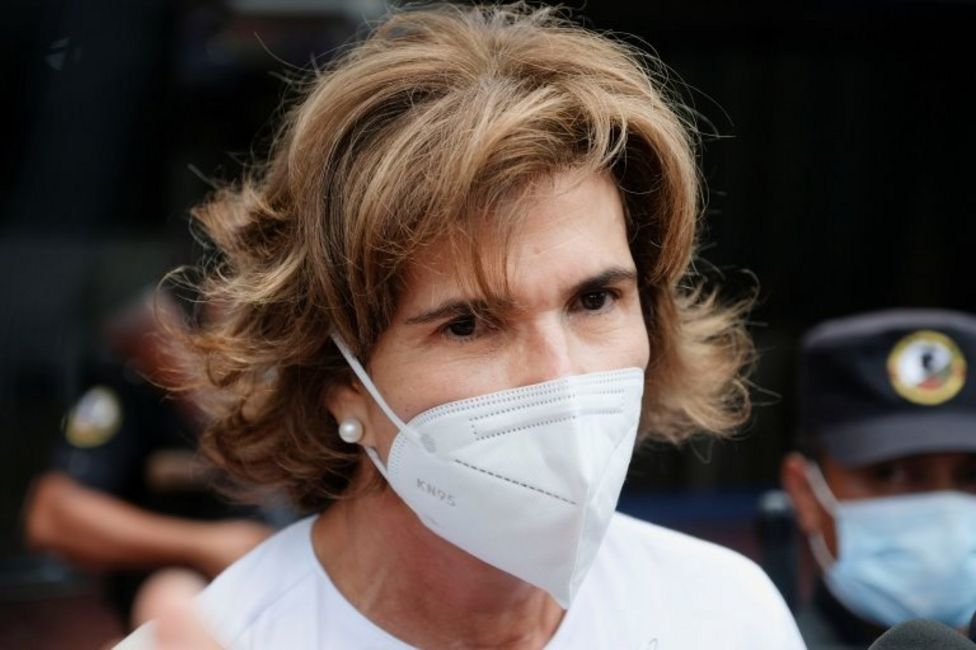 Prosecutors have accused Ms Chamorro of money laundering, which she denies, and demand she be barred from running in November’s election.

Ms Chamorro is seen by many in the opposition as their best hope of defeating President Daniel Ortega, who is expected to run for a fifth term.

Her mother defeated Mr Ortega in the 1990 presidential poll.

The arrest is the latest in a series of measures which the opposition says are aimed at crushing its chances of defeating the government in the upcoming election.

Who is Cristiana Chamorro?

The 67-year-old journalist comes from one of Nicaragua’s most influential families.

Her father, Pedro Joaquín Chamorro, was the editor of newspaper La Prensa, which opposed the autocratic Somoza family that ruled Nicaragua for decades. He was assassinated in 1978.

Violeta Chamorro, her mother, won the 1990 election to become the first female president in Latin America, putting an end to Daniel Ortega’s first 11 years as president.

Cristiana Chamorro had until recently been leading the Violeta Barrios de Chamorro Foundation, which is focused on press freedom. But she stepped down from the post earlier this year.

On Tuesday, she announced she would seek to become the presidential candidate for the opposition Citizen’s Alliance. The Alliance wants to field one single name in the hope of defeating Mr Ortega.

The president, who has been in power since January 2007, is widely expected to run again, though an official announcement is yet to be made.

How did things get here?

Shortly after Ms Chamorro’s announcement, prosecutors accused her of “abusive management [and] ideological falsehood” during her time at the helm of the foundation.

She has also been charged with “the laundering of money, property and assets, to the detriment of the Nicaraguan State and society”.

The investigation against her was opened in May at the request of the Ortega government. Ms Chamorro says they are trumped up charges to prevent her from challenging the president.

On Wednesday, shortly before Ms Chamorro was due to give a news conference, police raided her home in the capital, Managua, and placed her under house arrest.

What’s the reaction been?

In a statement issued before Ms Chamorro’s arrest, the regional body Organization of American States (OAS), of which Nicaragua is a member, said the country was “heading for the worst possible elections”.

“The use of the prosecutor’s office, injunctions and precautionary measures, the politicised handling of justice and the de facto banning of candidates are in violation of the Inter-American Democratic Charter, the OAS Charter, the instruments on human rights and of international pacts to which Nicaragua is party,” the statement read.

Last December, the legislative, which is dominated by parties allied with the government, passed a law giving the government the power to ban candidates from running for office if they are deemed to be “traitors” to Nicaragua.

The government says the law aims to protect “the independence, the sovereignty and self-determination” of Nicaragua. It claims the country is under threat from imperialist powers in the US and “coup-mongers” within Nicaragua who are determined to overthrow the government.

The opposition alleges that repression has grown since 2018, when anti-government protests swept through the country and were met with a violent police response. 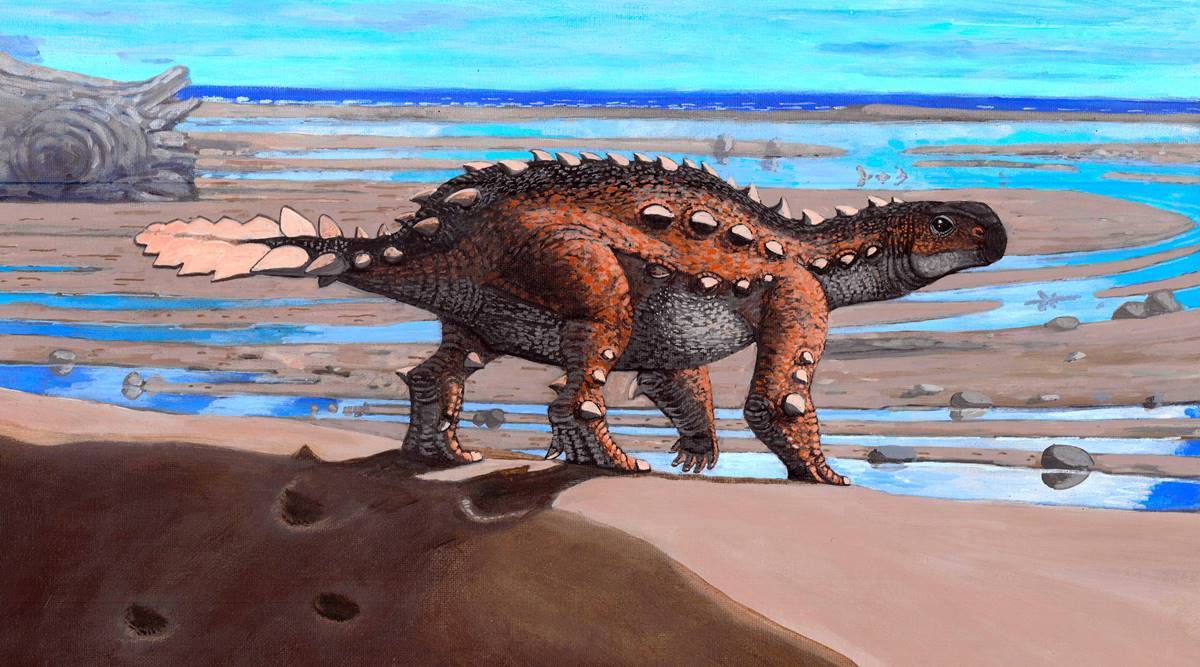 independent.ie- The discovery of a new species of dinosaur armed with a bladed tail similar to an Aztec war club means books on paleontology will have to be rewritten, experts said.

The two-metre-long dinosaur was a herbivore, but its tail, which was equipped with seven pairs of bony blades, meant it was more than capable of defending itself by slashing its predators.

Called Stegouros elengassen, it lived in Patagonia, part of what is now Chile, between 71 and 75 million years ago.

Its remains were found three years ago, but scientists have just published their findings in the journal Nature.

They initially thought they were dealing with a known species of dinosaur until they examined its tail, which they discovered was unlike any other dinosaur.

“It’s a really unusual weapon,’’ said Alex Vargas, a paleontologist at the University of Chile and lead author on the study.

“Books on prehistoric animals for kids need to update and put this weird tail in there. It just looks crazy.” The armoured tail would have resembled an ancient Aztec fighting club called a macuahuitl, which was embedded with obsidian blades.

Scientists said the discovery showed there was still much to learn about the diversity of the dinosaur world.

The seven pairs of blades, or osteoderms, were aligned on either side of the tail.

“We don’t know why the tail evolved. We do know that within armoured dinosaur groups there seems to be a tendency to independently develop different osteoderm-based defence mechanisms,” said Sergio Soto, another member of the team.

Despite its name, the new species is only distantly related to the more familiar stegosaurus.

Instead, stegouros is considered to be “the lost family branch of the ankylosaur” – a type of dinosaur known for its tank-like appearance, thick armour and club tail. 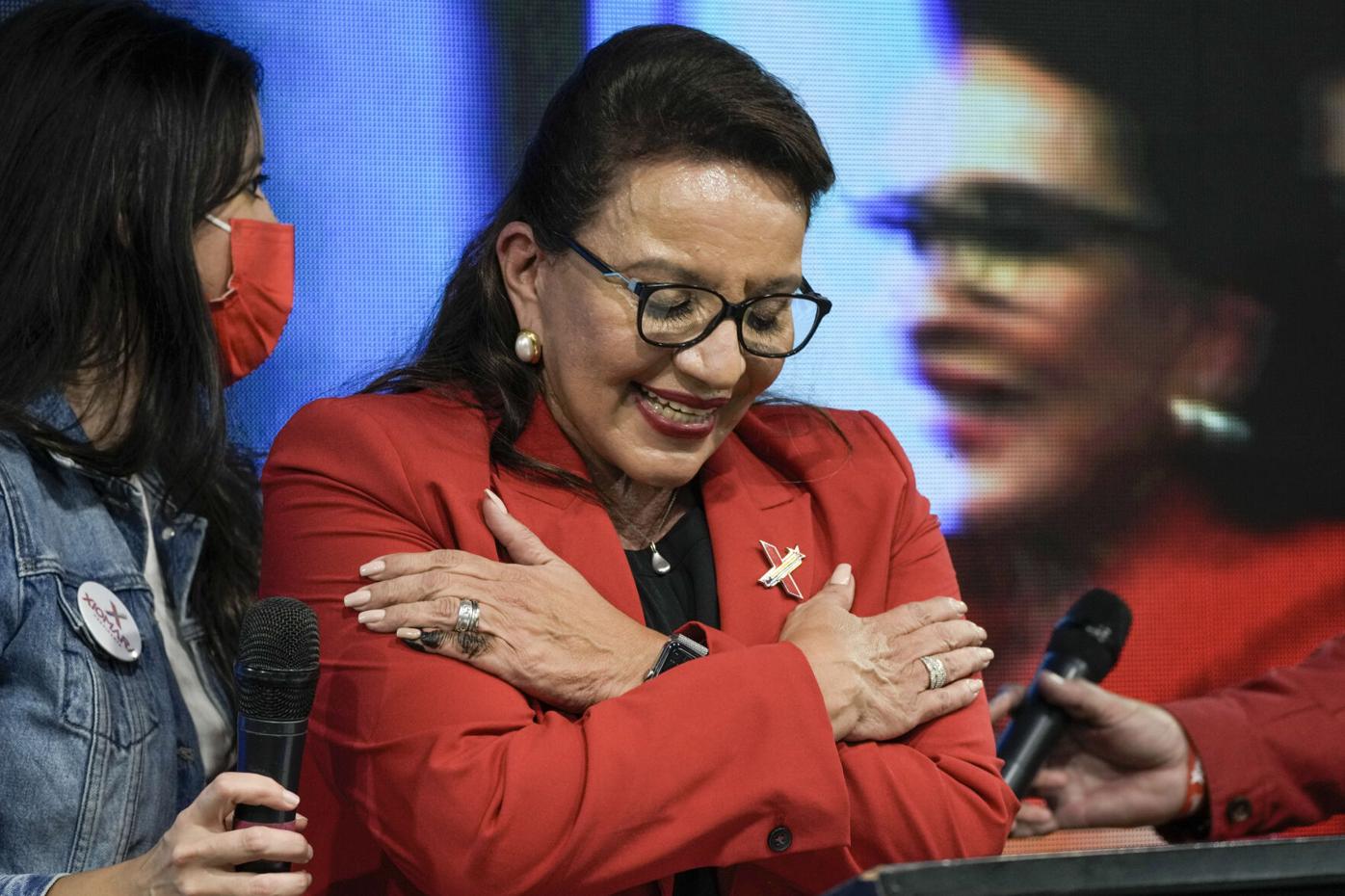 With half of the votes counted, the left-wing candidate is ahead of the governing party’s Nasry Asfura by almost 20 percentage points.

However, Mr Asfura has not yet conceded defeat.

If she wins, Ms Castro will become the the first female president of the Central American nation.

If her win is confirmed, her presidency will put an end to 12 years in power of the right-wing National Party.

The National Party won the presidential election in November 2009, just months after Ms Castro’s husband, Mel Zelaya, was ousted in a military coup.

Honduras has been led by National Party politicians ever since, first by Porfirio Lobo from 2010 to 2014, followed by Juan Orlando Hernández, whose re-election in 2018 was marred by widespread allegations of fraud.

While President Hernández did not run in Sunday’s election, he and his party gave their backing to the mayor of Tegucigalpa, Nasry Asfura.

The National Party appeared certain of victory before the electoral authorities had even announced the first official results, and convened its supporters to a “victory rally” in the capital.

Later on, Mr Asfura urged his supporters in a tweet to be patient but stopped short of admitting defeat.

There was jubilation at the headquarters of the left-wing opposition Libre (Free) Party, where supporters danced and cheered as Xiomara Castro’s lead was announced.

Writing on Twitter, Ms Castro thanked Hondurans for voting for her and said she would “transform 12 years of tears and pain into joy”.

In a reference to President Juan Orlando Hernández, who has been dogged by allegations of ties to the drugs trade after his brother Antonio was jailed for trafficking in the United States, Ms Castro promised during her campaign to “pull Honduras out of the abyss” of “a narco-dictatorship and corruption”.

While President Hernández has denied any wrongdoing, corruption ranked high in the concerns of voters, only surpassed by Honduras’ high unemployment rate.

If she is confirmed as the winner, voters will look to Ms Castro, who describes herself as “a democratic socialist”, to tackle these issues quickly.

bbc– The head of Ecuador’s prison system and the country’s armed forces chief have resigned following a fresh gang fight which left 68 inmates dead in a jail in the city of Guayaquil.

The deadly fight happened at the same prison where 119 inmates were killed in September, also in gang warfare.

It took 900 police officers to restore order after the latest incident.

The spike in prison violence has cast a shadow over the first six months in office of President Guillermo Lasso.

In a BBC interview earlier this month, President Lasso said that prison guards needed to be armed in order to be able to confront highly organised gang members.

“There is no way that prison guards who only carry batons can confront mafias which have drones and explosives,” he said.

The most recent incident happened during a 60-day state of emergency the president had declared inside the prison system.

The state of emergency means that extra funds can be allocated to fight violence inside the jails and also allows the military to assist guards and police in securing the prisons.

Despite the extra measures in place, another deadly fight broke out in the Litoral Penitentiary on Friday night.

Analysts have blamed the spike in prison homicides on the infiltration of Ecuadorean gangs by powerful transnational crime cartels.

They say that the acts of extreme violence – such as decapitations and the use of explosives – seen at Litoral Penitentiary were inspired by the tactics used by Mexican criminal organisations such as the Sinaloa and Jalisco New Generation cartels.

The local governor said that the most recent fight was triggered by the release of a gang leader which prompted members of a rival gang to try to seize control of one of the prison wings.

“As this section of the prison was without a ringleader after he had been freed by a judge, other gangs tried to surround the wing to carry out a total massacre,” Governor Pablo Arose Mena said.

According to police, the inmates were armed with guns and explosives.

Some of the relatives of those killed said that while the fight may have been triggered by gang rivalry, many of the victims were serving sentences for minor crimes and were not hardened criminals.